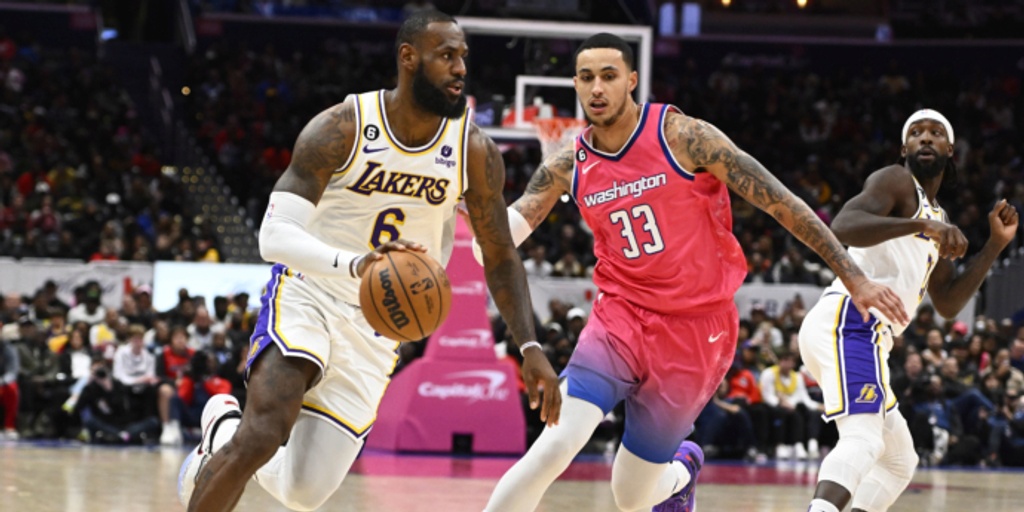 The Los Angeles Lakers are a mess.

Employing a roster that's built on guards in an era when most successful NBA teams are loaded with wing players, the team is currently 25th in the league in three-point shooting (33.9%) and ranks dead last in clutch-time performance, finding some creative ways to give games away.

Despite LeBron James continuing to playing at an unbelievable level in his 20th NBA season and soon hitting the age of 38, the Lakers find themselves at No. 13 in the Western Conference standings with a 14-21 record.

(Of course, you can point to the loss of Anthony Davis as a reason why the Lakers have dropped to seven games below .500. He was playing at an MVP-level and carrying this team on both ends of the court before he suffered a stress injury in his right foot on Dec. 16. He won’t be back until at least mid-January either.)

Everyone knows that this team desperately needs to make a trade. Even with their struggles, the Lakers need to do something – anything – or else they are just wasting another season of LeBron’s greatness. And he’s starting to voice his frustrations again, saying after their latest loss that his top priority remains winning: "Playing basketball at this level just to be playing basketball is not in my DNA.”

LEBRON: "I'm a winner & I want to win. I want to still compete for championships & that's been my passion & goal since I entered the league as an 18yo kid out of Akron, Ohio...Playing basketball just to be playing basketball is not in my DNA anymore.”pic.twitter.com/lAB22WNt6K

Before the season began, Lakers vice president of basketball operations and general manager Rob Pelinka pinky swore that the organization would do “everything we can, picks included, to make deals to give us a chance to help LeBron get to the end." It’s time for him to make good on the promise and actually – finally – make a move that can help the team sneak into the Play-In Tournament and maybe for future seasons as well.

The buzz around the Lakers is that Russell Westbrook and his gigantic $47 million expiring contract won’t be traded unless they can get a star in return. The more likely scenario is Los Angeles trading its two other expiring deals in Patrick Beverley ($13 million) and Kendrick Nunn ($5.2 million), and one of either its 2027 or 2029 first-round picks.

With the trade deadline approaching, more teams should be open to making a deal — especially those diving in the standings. Here are seven options and trade partners who could make sense.

One of these days, Michael Jordan and Co. might be convinced to blow up the Hornets, or at least enough to strip it down and build around LaMelo Ball.

The Lakers have apparently made it clear that they’re not interested in taking on an oft-injured Gordon Hayward, who is on the books for $30 million this season and $31.5 million next season.

The more interesting names would be PJ Washington and Mason Plumlee. Washington would add some size as a forward, and maybe his shooting — which has been hovering around a career-low near 40% — can turn around with a change of scenery. Plumlee would be another big body who can rebound and help protect the paint a little, especially with AD missing.

A deal for Beverley’s expiring contract alone would work salary-wise for both Washington and Plumlee; the issue is what else LA would have to include. A pair of second-round picks might not get it done, and the Hornets would likely demand at least a protected first-rounder.

Sure, the league would laugh if the Lakers traded back for Kyle Kuzma after including him in the Westbrook deal two summers ago. But in a lot of ways, he’s exactly what they need — a big wing who can switch on defense and rebound while creating his own shot and knocking down threes on the other end.

In his previous LA stint, Kuzma wasn’t happy with his role. But now, with AD playing the bulk of his minutes at center, Kuzma would slide in perfectly next to Davis and LeBron. Indications are that the Wizards want to build around Kuzma, Bradley Beal and Kristaps Porzingis. However, Kuzma is set to opt-out of his contract and he's poised to get a big pay day in free agency. Odds are that the Wizards wouldn’t want to lose him for nothing and would make him available with plenty of teams interested in renting Kuzma for the rest of the season.

While the Lakers won’t give up both of their future first-round picks, a package of Beverley and either the unprotected pick in ’27 or a protected pick and rookie Max Christie would seem feasible if Washington considered moving on.

Just before the start of the season, the Lakers and Pacers had the much-talked about deal for Buddy Hield and Myles Turner in place before LA backed out in hopes they could do it later without giving up both of its available future first-round picks.

That backfired. Indiana has an 18-17 record with Hield shooting a lights-out 41.9% from deep and Turner putting up 16.2 points and 7.8 rebounds a night on 40.5% from distance. Things could be much different for the Lakers if they hadn’t gotten cold feet.

Indy probably won’t revisit that deal, but Turner could still be available. The big man is set to become a free agent this offseason with a big raise. And while the Pacers are open to an extension, it could be too much for them to swallow.

Turner would be a huge addition to the Lakers' rim protection both now and once Davis returns to the lineup, as the two seemingly would be a great fit on the court together, terrorizing other teams defensively.

The price to land Turner would be high; at least one unprotected first and a second along with Beverley and either Nunn or Thomas Bryant to make the numbers work. (Of course, Indiana has young bigs in Isaiah Jackson and Jalen Smith already, so that doesn't exactly incentivize an agreement.) If you’re Pelinka, you keep your fingers crossed that the Pacers go on a losing streak and could be persuaded to revisit the Turner and Hield deal — but don’t count on it.

It’s not exactly the sexiest option, but the Lakers and Spurs have been dancing around each other since before the season. The Spurs are committed to the Victor Wembanyama sweepstakes and could lose center Jakob Poeltl in free agency.

The Lakers may have interest in him, along with wings Josh Richardson and Doug McDermott, who would add shooting and some size to match up better against teams.

San Antonio is looking for a premium package in exchange for Poeltl, whose skill set probably works better some place else.

A deal for Richardson and/or McDermott – who is shooting 42.3% from deep, but also on the hook for $13.7 million next season – makes sense if all it takes is a few second-round picks. More matching salaries would additionally have to be included with Beverley and Nunn in a bigger deal.

Our own Nekias Duncan recently detailed why good teams should be looking to trade for Bojan Bogdanovic, and it’s already been reported that the Lakers have talked to Detroit about him. The 33-year-old is having a banner year, averaging 20.7 points on 47.7% shooting and a whopping 40.4% from three-point range.

You’re not exactly getting a defensive dynamo with him, but he would help balance the roster and his offense would probably be worth it. However, Bogdanovic did sign a two-year, $39 million extension that would bite into LA’s available cap space going forward. But it’s not like this upcoming year’s free-agency class is fantastic, as the best players are likely going to stay put with their current teams.

Bojan feels the contact and gets the fading and-one in the corner! #Pistons | @ThinkFordFirst pic.twitter.com/ELivYW2vmQ

The Pistons brass has been posturing about keeping Bogdanovic, but with the team going nowhere this season, a Cade Cunningham-less, still-rebuilding Detroit is expected to take calls as the deadline approaches. Would a top-four protected first in 2027 along with Beverley and Nunn’s expiring deals be enough?

There are other options in Motown as well. Alec Burks is connecting on 43.2% of his threes in just over 21 minutes per game and Nerlens Noel has been benched in favor of younger players. Both veterans would provide a need for the Lakers and each has a team option for next season, so there isn’t a long-term commitment. Plus, Burks and Noel would probably be available for deals involving second-round picks.

With young stars in rookie Paolo Banchero and second-year player Franz Wagner, the Magic are in a great position in their latest rebuild. In addition, they were smart in the offseason to re-sign Mo Bamba ($10.3 million) and Gary Harris ($13 million) to very movable deals that are non-guaranteed in 2023-24. Plus, the always-in-trade-rumors swingman Terrence Ross is on the final year of his contract.

It's unlikely that LA would sacrifice one of its gold-chip first-round picks in any deal with Orlando, but Bamba-Ross for Beverley-Nunn and some second-rounders could be a worthwhile gamble. It’s not a glamorous deal, but it shows a little effort. (Though, the Magic might elect to continually develop Bamba instead.)

Before last season’s deadline, the Knicks and Lakers were almost part of a three-team deal with the Toronto Raptors that could have put Cam Reddish in the purple and gold. And the Lakers are still interested in the 6-foot-8 forward despite his struggles that have kept him outside of New York’s rotation.

The two teams talked earlier this season about Evan Fournier, who is owed almost $19 million next season and has fallen out of Tom Thibodeau’s rotation as well. Even if NY included a future first-rounder to get off Fournier’s deal along with Reddish, the deal would be an act of desperation on LA’s behalf and not worth it.