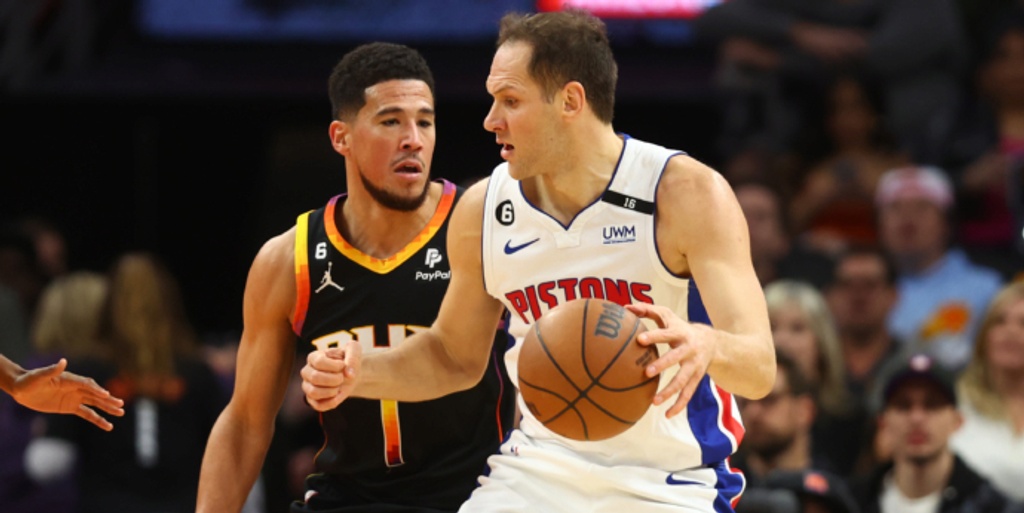 Good teams should be looking to trade for Bojan Bogdanovic

This isn't how things were supposed to go in Detroit.

It was hard not to be excited for the Pistons heading into the year. Strong draft class, headlined by Jaden Ivey and the traded-for Jalen Duren. A Jerami Grant trade not only netted them a future first-rounder and other draft capital, it was a move made in part to clear some of the runway for Cade Cunningham and Saddiq Bey, the latter of which was expected to fill more of Grant's time at forward.

The shooting woes that hampered Detroit last season were somewhat accounted for; adding Alec Burks into the mix was supposed to help, and an offseason trade for sniper Bojan Bogdanovic was expected to be a big add to their offense.

Fast forward to now, and the Pistons are without Cunningham for the year, dealing with an uneven campaign from Bey, and ultimately find themselves percentage points away from the worst record in the NBA.

So much for the play-in ceiling.

There have been bright spots though. Ivey and Duren have been as advertised; Ivey's going to make the All-Rookie first team, and Duren could make a push for it by the end of the season. Loyal listeners of The Dunker Spot know how pleased I've been with Killian Hayes' growth this season.

On the veteran side, Bogdanovic has somehow been better than expected.

The initial plan was to spread the floor at a high level, and act as a security blanket so Cunningham (and Bey) wouldn't have to work as hard as creators. Instead, Bogdanovic has become the defacto top option.

The efficiency has been off the charts, with Bogdanovic converting a ridiculous 56.6% of his twos and nearly 41% of his threes.

League-wide, Bogdanovic is one of five* players converting at least 55% of their twos and 40% of their threes with high volume during this month-plus stretch, joining Stephen Curry, Donovan Mitchell, Andrew Wiggins and Lauri Markkanen. (*Wendell Carter Jr. is also on this list, but only has three games under his belt during this stretch. Please come back soon, Wendell. We miss you, and the Magic surely do.)

What makes Bogdanovic fun is the myriad ways he can be used. He's running nearly 15 ball screens per 100 possessions since November 11, and the Pistons are scoring roughly 1.04 points per possession (PPP) on those trips — a mark that ranks in the 72nd percentile, per Second Spectrum.

He's shooting most of the time (50.8%), with his scoring prowess popping against drop coverage or switches (1.08 PPP). Bogdanovic slow-probes his way to his spots, whether that's keeping his defender at bay when faced with drop, or picking out a matchup agains a (late) switch and posting up.

There are still limitations. Mainly, Bogdanovic's handle isn't tight enough to access every area of the court on a whim. When faced with more aggressive coverages — hedges or flat-out traps — he's prone to retreating without taking full advantage of the numbers game ahead of him. Even when he isn't, navigating close quarters can be an adventure. He's up to 27 "lost ball" turnovers in 30 games this season (0.9), after racking up 48 of them in 69 games last season (0.7).

Even with that uptick, it's hard to ignore the overall efficiency here. And it's especially impressive considering he's carrying a much larger offensive load than originally expected.

This isn't the first time Bogdanovic has had to scale up. He saw his shot volume increase by nearly three attempts between his first and second year in Indiana. In year two (2018-19), Bogdanovic averaged 18 points with shooting splits similar to what he's doing now — 53.8% on twos, 42.5% from three. That was a year where Victor Oladipo appeared in just 36 games.

But this is different. Bogdanovic's 64.9% True Shooting clip is easily the higheest of his career, and a whopping 7.4 points above league average. It would behoove other teams to take notice.

The Los Angeles Lakers reportedly have, according to The Athletic's Shams Charania. The Phoenix Suns were linked to Bogdanovic before he was dealt to the Pistons, and could probably use another shot creator in light of Chris Paul's decline in that area.

There are others, like the Atlanta Hawks, that could use the forward's blend of creation and outside shooting. Is there a conversation to be had around a package headlined by John Collins? It's certainly worth asking. Mike Scotto of HoopsHype reported that the Miami Heat and Dallas Mavericks have also expressed interest.

That would track. The Mavs desperately need more creation to take pressure off of Luka Doncic. The Heat need more shooting — they rank 21st in three-point percentage despite ranking seventh in three-point rate — and could stand to upgrade at the 4, though Caleb Martin has played pretty well this season.

Of course, the Pistons don't have to cooperate. They recently extended Bogdanovic, and per James Edwards of The Athletic, the Pistons aren't eager to move him. It would (rightfully) take a big offer to pry him out of there. But with the way he's playing, it's probably worth the swing.