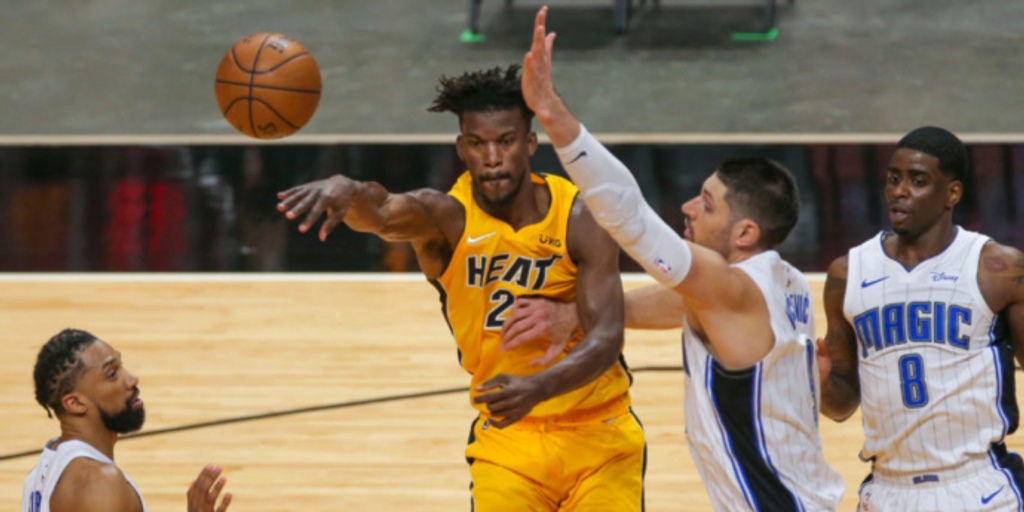 Jimmy Butler has become a hallmark of elite NBA defense. The superstar wing has landed on an All-NBA or All-Defensive team in seven of the last eight seasons, and he led the league with 2.1 steals per game in 2020-21. Butler is notoriously one of the most ferocious matchups in basketball, smothering his opponents while making sure they know it.

However, the star swingman has also become a consensus top-20 player (at the very, very least) because he serves as the offensive focal point for a Miami Heat team one year removed from an NBA Finals run. Butler maintains a cerebral view of the offense and has a knack for finding pockets in the defense as a passer. He's methodical in the pick-and-roll and surgical out of the post.

In 2020-21, 66 NBA players logged a usage rate of at least 26%, according to Cleaning the Glass (which accounts for passing). Only four of them — Butler, Chris Paul, CJ.McCollum and DeMar DeRozan — notched an assist-to-turnover ratio of 3.0 or greater. In fact, Butler's 3.39 AST/TO ratio ranked ninth among all qualifying NBA players, per Sportradar.

Now, AST/TO ratio isn't a perfect stat. It includes all turnovers by a player — not just bad passes — and doesn't account for good passes that didn't lead to a basket. But in general, it shows how many successful connections stand against the poor plays Butler made with the ball. Suffice it to say: He is a fantastic decision-maker.

Want more proof? According to Cleaning the Glass, Butler assisted on 34.4% of his teammates' made shots, in the 98th percentile among wings. His AST/Usage rate (how often he assists versus how often he had the ball) was the single-best in his positional group. His 9.6% turnover percentage placed in the 73rd percentile.

In short, Butler is finding his teammates at an elite clip for a high-usage player while limiting turnovers.

The Heat have historically thrived with a host of specialists around two centerpieces in Butler and Bam Adebayo. Duncan Robinson is on the basketball court to shoot threes. Tyler Herro should be firing away. You can add Kyle Lowry to the playmaking core, but new acquisitions Markieff Morris and P.J. Tucker will operate as primary threats on the perimeter as well.

Butler finished 10th in the league in with 13.8 potential assists per game (passes leading to a shot attempt), per NBA Stats. About 12.9% of his passes became an assist, good for 16th in the NBA. So Butler, in a similar vein to LeBron James, is the fulcrum, spreading the ball around to his shooters and finishers. And the five-time All-Star is adept at hitting those teammates in the flow of their actions.

Let's look at the connection Butler has with sharpshooter Duncan Robinson.

These dimes are exquisite. I wouldn't say Butler is necessarily "passing Robinson open," but I marvel at the timing with these cuts. It takes a high-level understanding of the playbook and his teammates for Butler to pass so precisely.

Again, there's a LeBron-esque command to these plays. Butler is often holding the ball in the post or on the wing, letting the action develop and nailing Robinson with a pinpoint pass that leads right into a shot. In these 14 clips, Robinson took all of four dribbles, and those were merely to sidestep away from an aggressive closeout. He never had to gather himself or dribble out of a mess. Props should be given to Robinson for being one of the best off-ball movers in the NBA. But at the same time, Butler makes things much easier for him.

Butler generated 17.2 points per game off of his assists last season, good for 14th in the NBA (per Sportradar), by honing in on off-ball threats like Robinson.

Moving onto another favorite target: Bam Adebayo. These are four clips, only from the first-round series against Milwaukee, that showcase Butler's elite processing of opposing defenses.

I mean, these are four very different looks. First, Butler recognizes Brook Lopez playing in drop coverage and hits Adebayo on a short roll for an easy floater. In the second clip, Giannis Antetokounmpo and Bobby Portis force Butler along the baseline. He waits until the last possible moment (from this angle, he's nearly behind the backboard) before tossing a perfect lob.

Third play: Butler sees the drop coverage and recognizes that Khris Middleton played the screen aggressive, getting him out of position. Butler draws Lopez in and wraps the ball around to Adebayo for a nice layup. Finally, we see Butler posting up Middleton. As Adebayo looms in the dunker spot, Lopez comes to double, and Butler immediately sends a bounce pass to Adebayo.

Butler's court vision allows the Heat to run those complex screening plays for Robinson and others. It allows Adebayo to wreak havoc as a roll man. The offense hums at its best when Butler is attacking for himself off the dribble and patrolling the half-court for his next assist.

Things could get even more exciting with Lowry, the aforementioned new shooters and a healthier Victor Oladipo. Lowry made 41.6% of his catch-and-shoot threes with the Raptors last season, per NBA Stats, and should thrive as another outlet for Butler. He can also relieve the Heat star of some of his playmaking burden. Oladipo could have success as a cutter; he finished 65.5% of his attempts within three feet last year and 69.0% in his All-NBA 2017-18 season.

Miami nailed its 2021 offseason by all accounts. Butler will still be the captain of the ship, however, and the ultimate catalyst for an improving offense. Few teams are lucky to have such a steady steward.

This is the second installment of Ethan's Superstar Secrets mini-series. If you missed it, check out his breakdown of James Harden's underrated post defense.