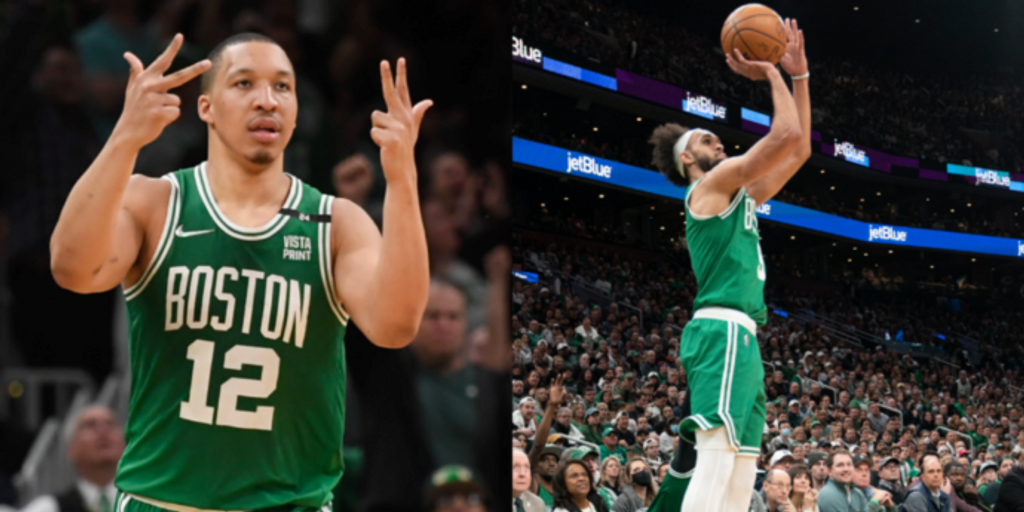 Even though the NBA Playoffs present the highest stakes in basketball, the postseason is still akin to its own set of laboratories.

Within a seven-game series, teams are tinkering with strategies and toggling the risk-versus-reward dials on points of emphasis. They also have more data at their disposal, which means more information to sway decisions — and make those decisions more complicated.

We're onto Game 3 of the Eastern Conference semifinals between the Boston Celtics and Milwaukee Bucks after two of the more radically divergent results of the postseason so far. But one thing hasn't changed: Boston, through its own creation and the Bucks' defensive scheme, is letting the three-ball fly.

The Celtics have attempted a whopping 93 three-pointers across the first two games in this series. They hoisted up 50 in Game 1 and 43 in Game 2; those totals rank second and seventh among all 2022 playoff games to this point. A mammoth 45 of those 93 perimeter tries (48.4%) have been categorized as "wide open" by Second Spectrum, meaning no defender is within 6 feet of the shooter.

Digging deeper, those 45 wide-open threes make up 27.4% of Boston's overall field goal attempts — the highest frequency of any team in the second round. (For some context, only 18.8% of the team's shots were wide-open threes during the regular season.)

That frequency is second among all NBA playoff series so far. Not coincidentally, it's just barely behind Milwaukee's first-round opponent, the Chicago Bulls (27.7%).

This isn't some playoff crumbling. The Bucks allowed a league-high 20.3 wide-open threes to opponents in the regular season. They've ranked in the top two for most such shots allowed in each season since Mike Budenholzer took over as head coach in 2018-19. But Milwaukee tailors what it allows opponents to take, hoping to funnel those threes to the most volatile shooters. It worked during the regular season; teams shot 36.3% on wide-open threes against the Bucks, tied for the third-worst percentage in the NBA. Chicago didn't make them pay either, knocking down just 30.4% of those shots.

However, against the Celtics, we've seen the double-edged sword to this approach.

Milwaukee lives with these three-point shots because it wants to fortify the paint with its lineup of big, long, physical defenders. The help defense is so aggressive because the Bucks want to keep Jayson Tatum, Jaylen Brown and Marcus Smart from establishing any kind of momentum getting to the basket. Driving lanes are a pillar of today's NBA offenses, and I highly recommend you read Mark Schindler's recent piece that explains how drives make the league much more than a game of twos and threes.

The Celtics have made a mind-numbing 20% of their shot attempts on drives to the basket this series, per Second Spectrum. They have attempted 40 shots within 5 feet of the rim and finished just 50% of those looks, which is last among the second-round teams. Boston is also bottom-two in shot volume and efficiency from the 5-to-9-foot range and 10-to-14 feet. Milwaukee appears to have built a fortress.

Such an emphasis on paint protection means the Celtics have plenty of three-point chances. This isn't to say the Bucks don't care — one, that's not how NBA defense works, and two, they have several great recovery defenders on the roster. If Boston moves the ball with purpose, its players can find openings. However, they might be just the players Milwaukee wants firing away.

Here's a breakdown of Boston's three-point shooting volume by rotation player, and the frequency of wide-open looks with data from the NBA's stats site. No efficiency rates yet.

The big numbers that stand out: Al Horford, Derrick White and Grant Williams have found a lot of open three-point attempts. Meanwhile, Tatum and Brown have captured the attention, and Payton Pritchard has garnered the defense's respect to a lesser extent.

Importantly: This isn't the Bucks simply leaving Horford, Williams and White open without any closeouts. Boston has worked to find these players on the perimeter, and speficially made adjustments in Game 2 that helped these three get in position. Jared Weiss of The Athletic wrote a fantastic postgame analysis of what changed, so keep it in mind.

The point is that the Bucks have not locked a target on Horford or Williams when they move around off the ball, and it's come with mixed results. Horford actually made 4 of his 9 three-point attempts in the Game 1 loss, but went 1 of 5 from long range in Game 2. Williams, meanwhile, has been on a heater in the series and made 6 threes en route to a career-high 21 points in the Celtics' blowout win.

All of these numbers comprise a miniscule two-game sample size though. What can fans reasonably expect from the Celtics' shooters if things stayed the same? Here's how the non-Jay rotation players fared in desirable settings during the regular season.

My takeaways: It's pretty clear that Williams is a certified sharpshooter at this point and capable of killing the Bucks if he keeps receiving these open shots. The same goes for Pritchard, though the Bucks seem to know it already. Meanwhile, Horford appears to make more sense as a perimeter gamble, as do Smart and White.

However, let's not forget the importance of location. Just look the stark differences in efficiency from... well, everyone, when they shot from the corners vs. above the break in the regular season. Milwaukee has done its homework. The Celtics have put up 12.5 corner threes per game in the series, shooting a scorching 56.0%. But it's outweighed by their 33.0 above-the-break attempts per game, which have fallen just 34.8% of the time.

The Bucks recognize that eliminating paint chances means dampening the playmaking chops of Tatum, Brown, Smart, White and Robert Williams III. The Celtics understand that they have to bet on their shooters, which can open up close-out attacks, extra passes and more open shots — as we saw in Game 2.

The value of rim attempts and threes is widely understood, but not all shots within those buckets are created equal. Here’s a look at which remaining playoff teams produce the most “high-quality” shots at the basket and from beyond the arc: pic.twitter.com/4735x1mF5T

Really interesting chart. But I think a better way to frame this might be - MoreyBall already won, and so the easy gains from it are already baked in for every team.

During the regular season, defenses surrendered a shade under 1.22 points per possession (PPP) to them on direct plays. That isn't just the best mark in the NBA among high-volume pairings (min. 300 picks); they're over 5 points per 100 possessions better than second place (Atlanta's Trae Young-Clint Capela, 1.16 PPP). That Paul-Ayton number has gone up during the postseason (1.24 PPP), a remarkable feat considering they've run 48 more picks against drop than any other duo.