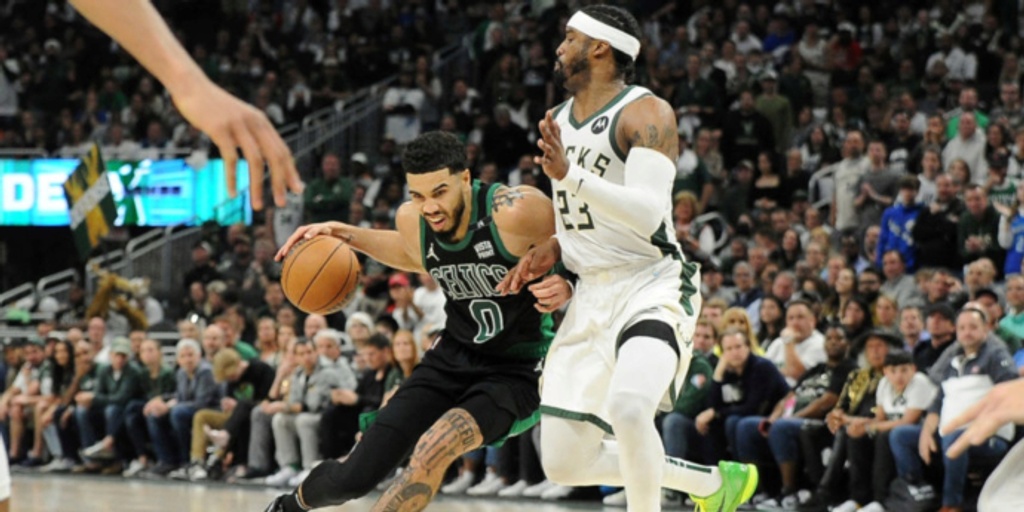 Fresh off their first title in 50 years, the Milwaukee Bucks entered the season with a few questions.

There were big-picture unknowns surrounding the main cast. What would Giannis Antetokounmpo look like after getting the proverbial monkey off his back? Was it time to stop questioning Mike Budenholzer, who eventually finally found enough schematic answers en route to a title?

(If the latest episode of The Dunker Spot is any indication, the answer to the Budenholzer question is a resounding "No.")

And then, there was one bubbling underneath the surface: How would the Bucks replace PJ Tucker?

Tucker was an integral part to the Bucks' title run. He brought value offensively as a screener, and, while his percentages were below his norm, he still made timely shots from the corners. He hummed around the dunker spot and gave Milwaukee extra possessions on the glass — ask the Atlanta Hawks how the "Hide Trae Young on Tucker" strategy worked for them.

More importantly, Tucker brought the goods defensively. His value was two-fold. Even at his age, he was able to slither over screens, slide with stars in space and hold his own when bigger players attempted to post him up. The star assignments were almost exclusively his to take. And because he took on those assignments, guys like Giannis and Middleton didn't have to.

Tucker wasn't and isn't as important as those two, but his departure to the Miami Heat — what a season he's had — left a bit of a void.

The Bucks added Semi Ojeleye over the summer in hopes he could provide similar impact. Maybe Thanasis Antetokounmpo, as the endless ball of energy he is, could be enough of an irritant in spurts.

They eventually went back to the veteran well on Dec. 3, signing the well-traveled Wes Matthews to a deal. The thinking was clear: We need a guy who can defend tough matchups and hit enough shots on the other end to keep teams honest.

Fast forward to the postseason, and Matthews has done just that.

He's knocked down 44.1% of his threes on nearly 4 attempts this postseason. He's been a help-off-him point for defenses much like Tucker, but the two differ in their shot profiles. Over 80% of Tucker's threes came from the corners last postseason; only 41.2% of Matthews' triples have come in those pockets.

But because Matthews is better at — and more willing to take — above-the-break threes, he's a little easier to move around the chessboard. He can also chill above the break, acting as the one-pass-away outlet on Giannis post-ups or isolations.

Defensively, it's hard not to marvel at the job Matthews has done. This is a 35-year-old, who's suffered a torn Achilles in his career, graciously taking on assignments like DeMar DeRozan, Zach LaVine, Jayson Tatum and Jaylen Brown.

Despite being at a size disadvantage and athleticism disadvantage, Matthews has been able to hold his own. He's proven to be a high-level screen navigator at his big age, able to fight through picks and reattach to a star's hip to bother him. Even when he's hung up on a screen, he doesn't die. He finishes possessions with rearview contests, or at the very least funnels his man into Milwaukee's forest in the paint.

A drop-coverage scheme doesn't work without someone like Matthews. Asking any big man, no matter how good he is, to deal with elite scorers in space is typically unfair. Matthews is able to make life easier for his bigs, much like their size acts as a buffer in the event that Matthews gets beat.

It's been fun watching Matthews have to problem-solve in the first two rounds. He got the DeRozan match-up in Round 1, which meant dealing with the All-Star's superb footwork and herky-jerky style. Nikola Vucevic is one of the NBA's best screeners, so dealing with them in tandem is tough work.

Matthews had to fight over screens and duck under screens when Chicago went to its Double Drag looks. He had to ICE screens — attempting to keep the action on the sideline — while also worrying about DeRozan snaking picks and getting into the mid-range area. He's built the whole boat on mid-range buckets, so slowing him down is a lot easier said than done.

Yet, Matthews did a darn good job. He faced 104 picks while defending DeRozan in pick-and-roll, per Second Spectrum. The Bulls generated 0.66 points per posssession (PPP) on those trips — well below their regular-season mark (1.04 PPP).

The expectation has changed a bit during the second round. He's gone from the guile and patience of DeRozan, to the more sudden and explosive natures of Tatum and Brown. It's been mostly Tatum, whose lack of comfort in the mid-range is countered by his willingness to pull from deep, as well as his downhill aggression.

But again, Matthews has mostly held his own. Possessions featuring Matthews defending a Tatum-led ball-screen have only generated 0.77 PPP. This may shock you, but that number is also below Boston's regular-season norms (1.00 PPP).

Matthews is knocking down open shots from all over the floor. He's taking on star wing assignments so Giannis doesn't have to. He's also holding his own with said assignments.

Naturally, the Bucks are having a good time with Matthews on the floor.

In summation: Matthews deserves his flowers.