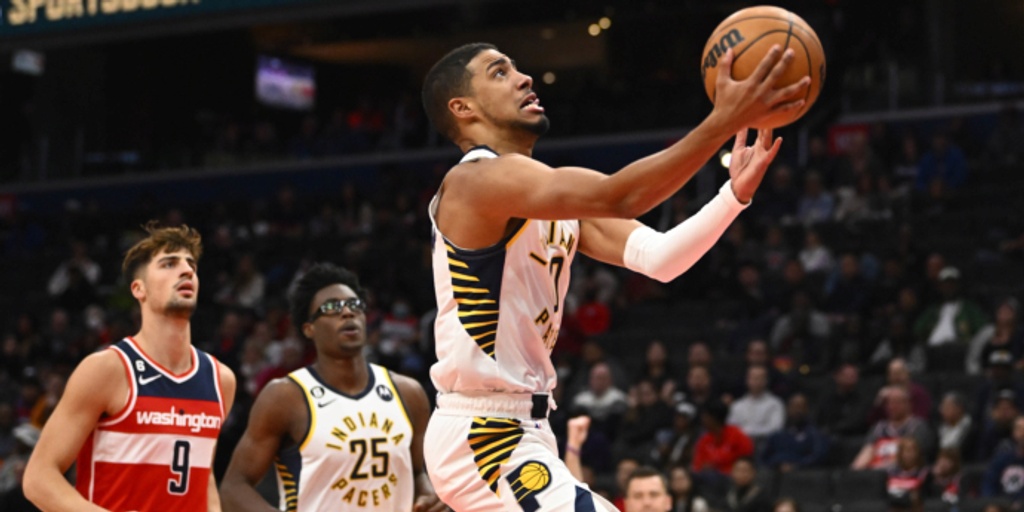 For the last four years, Nikola Jokic has set a standard as the offensive fulcrum in the NBA.

The two-time Most Valuable Player led the league in touches per game from 2018-19 through 2021-22, according to data tracked by NBA Stats and Second Spectrum. He became the first player in tracking history (dating back to 2013-14) to average over 100 touches per game across an entire season in 2020-21, then did it again last year.

But for the first time in five years, Jokic isn't atop the leaderboard in that statistical category.

The dynamic young guard is averaging 97.1 touches per contest through his first 21 games — easily a career high, and even an uptick from his two-month stretch last spring after the Indiana Pacers acquired him before the trade deadline. That mark is on pace to be the fourth-highest non-Jokic touch diet recorded in 10 years of tracking.

At just 22 years old, Haliburton has rapidly ascended to his current status as the NBA's assist leader and one of its premier orchestrators. Just look at the latest history he made:

Per NBA Stats, he’s the first player to do that in a three-game span since individual turnovers were first tracked in 1977-78 🤯 pic.twitter.com/3EKLBYNd73

“I want to be a 20-and-10 guy and I want to be an All-Star,” Haliburton told our Alex Kennedy before the season.

So far, he's on track, posting 19.3 points and 11.2 assists per game, even after a dud outing against his former Sacramento Kings team. Many people, myself included, expected Haliburton to stuff the stat sheet this year on a bad Pacers team destined for the NBA Draft lottery.

Except... the Pacers haven't been bad. They're 12-9 and fourth in a crowded middle pack of the Eastern Conference. In that time, Haliburton has been the clear best high-volume passer in the league.

Seriously, pick a site and pick a stat. Haliburton is responsible for 51.3% of his team's assists, the best mark in the NBA, and his 1.76 assist-to-usage rate is also tops in the league, per Cleaning the Glass. He passes the ball more than anyone else (76.2 times per game) and 18.3% of those passes turn into assists or free throws (ranked 7th), according to Second Spectrum.

BBall Index has 11 listed metrics for playmaking traits; Haliburton is in the 98th percentile or higher in 10 of them. But I'd like to specifically highlight his 11.7 "high value assists" per 75 possessions, which track his rate of creation for three-point, at-rim and free-throw assists.

Haliburton leads the NBA by a significant margin with 4.76 three-point assists per game. His instinctual processing is otherworldly, as he'll show us:

Tyrese Haliburton takes us inside the mind of the @nba’s assists leader, sharing his thought process during the final play of last night's game when he found Andrew Nembhard for the game-winning three. pic.twitter.com/u6D1McSmqD

The most popular assist combination in the league, according to PBP Stats, is Haliburton setting up Buddy Hield. He's done it 61 times; no other player has connected with a teammate more than 50 times this season. Haliburton also has another, quieter frequent-assist partner: Jalen Smith, who's been the beneficiary 44 times this season (seventh-most in the NBA).

Haliburton recognizes that defenses don't fully respect Smith as a perimeter shooter yet. But the combo guard is still happy to hit up his teammate for an open shot, and Smith has lately been knocking them down as a trailing or spot-up shooter. Then Haliburton also capitalizes with his ball-screen savvy, drawing in defenders to hit Smith as the roller or as a separate cutter.

These dishes might not always seem flashy, but they reinforce two key developments: Haliburton's overall pristine court awareness, and his growing gravity as an individual scorer. Here's a snapshot of his presence at the rim in his career, per Cleaning the Glass:

Haliburton is getting to the cup more than ever and doing some serious heavy lifting by himself to create those shots. Yet, he's experienced no falloff in efficiency whatsoever.

I mean — this just looks so easy! Haliburton is changing directions quickly into mismatches, getting low and turning corners with purpose, using changes in stride to decelerate, finishing off buckets with his length and touch, and, in the last clip, just making defenders look downright silly. He was not supposed to have this in his bag coming out of Iowa State. He just makes attacking with the basketball look effortless.

Haliburton is scoring on 51.7% of his driving field goal attempts; that's not a world-beating rate, but it's very good for his volume, and it sufficiently threatens opponents. This means more defenders stay focused on Haliburton, resulting in more passing lanes appearing on his internal radar.

This glosses over Haliburton's perimeter shot-making, which has started cold, but is a hallmark of his game. The third-year guard has canned just 34.0% of his catch-and-shoot treys while keeping a better, 38.0% clip on pull-ups. The catch-and-shoot numbers are bound to improve; he's been over 43% in each of his prior two years and has a long track record of shooting prowess.

Revisiting Kennedy's summer feature, Haliburton said that becoming an imposing scorer would allow both himself and his teammates to prosper:

"I think being more aggressive as a scorer will allow me to also open up more things as a facilitator; I think it boosts both things for me... [I’ll] still be facilitating, but I’ll also be looking for my own [shot], and that's gonna help everybody at the end of the day," Haliburton said.

It is remarkable that, in the span of 21 games, Haliburton has manifested these results. It's another testament to his vision, both on the basketball court and of his own stardom.

eFG% on 2PAs has passed that of 3PAs as 2P% keeps climbing. pic.twitter.com/lujr2qBEYy

Jalen Williams is shooting 62.1% on two-pointers this season and only 45% of those have been assisted. He's already got such a smooth ability to change pace, finish with strength and length, and use floater touch.

Some great moments from his 27-point game: pic.twitter.com/fZxV1Uuacx