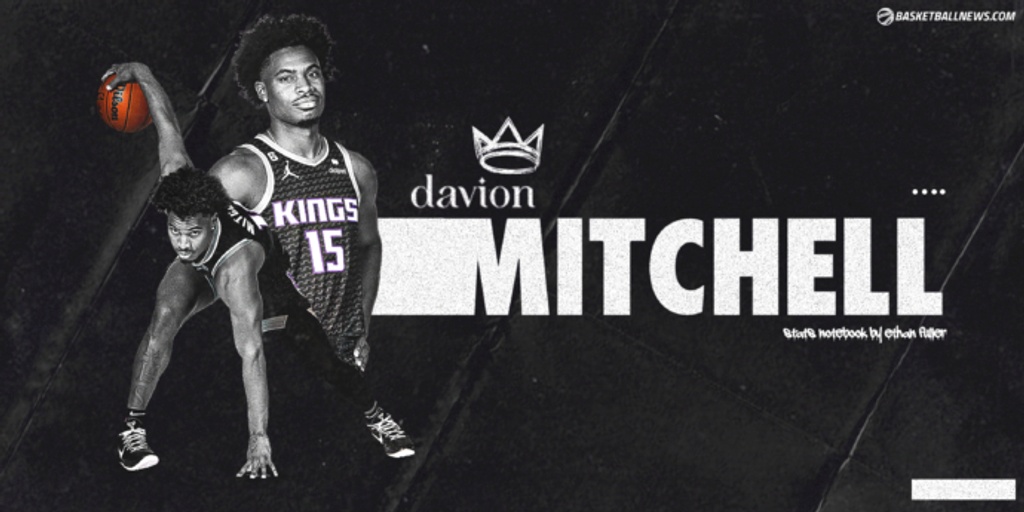 NBA Stats Notebook: Why Davion Mitchell could make a big step in Year 2

NBA basketball in 2022 is centered around the ability to create advantages on offense and minimize advantages on defense. Players and teams can space the floor, collapse it and warp it at myriad levels with the freedom to drive — and dish and shake and cut — all over the place. It's part of the reason guys like Giannis Antetokounmpo and Nikola Jokic think EuroBasket is a harder environment.

The modern game all but requires NBA offenses to have at least one (and probably more than one) player on the court who can collapse an opposing defense with a 1-on-1 drive. Defenders who can snuff out those advantages, meanwhile, earn high esteem; just look at how players like Andrew Wiggins, Draymond Green, Marcus Smart and Derrick White helped get their teams to the NBA Finals.

Guys rarely excel in both dimensions of the fire-and-ice combination, spark offense and freezing foes on defense. Sacramento Kings point guard Davion Mitchell was one of those rarities as a rookie:

Two important avenues to player impact are advantage creation on offense and prevention on defense. Here are where players stacked up last season in these two on-ball measures: pic.twitter.com/Jp5yVdWMnn

Mitchell didn't make an All-Rookie team last season and feels somewhat lost in the crowd of an exciting 2021 draft class. But the former No. 9 overall pick, even at 24 years old, should be considered just as poised for a second-year surge as any of his competitors. He's smack-dab in the middle of the above graphic from SIS Hoops, sitting near dynamic two-way catalysts like Smart, White, Justin Holiday and Fred VanVleet.

The Kings got shellacked last night, but Davion Mitchell really stood out early. Thought he bothered Trae a good deal in the first quarter, tracked him well off-ball and in screen navigation
Got his shot off and was aggressive early. Good stretch for him pic.twitter.com/JIv534iqcM

Mitchell has earned the "Off Night" moniker for his hounding individual defense, and new Kings coach Mike Brown is already a witness.

"I can honestly say at this point in his career he is one of the best on-ball defenders I’ve been around," Brown told Anthony Slater of The Athletic. "Some of the things I’ve seen in the summertime remind me of a Gary Payton II type of on-ball defender.”

The offensive end took a bit more time to flash. Mitchell averaged 11.5 points and 4.2 assists per game with a lackluster 48.9% True Shooting percentage in 2021-22, but those cumulative numbers don't tell the whole story.

After the All-Star break, the rookie put up 14.1 points and 5.9 assists per game across 19 contests. Eleven were starts, in which he averaged 18.8 points and 9.3 assists per game. De'Aaron Fox and Domantas Sabonis dropped out of the season due to injuries after March 20, leaving Mitchell to run the show as the Kings trudged along, out of the playoff picture.

Those who stuck it out with Sacramento saw Mitchell settle in as an advantage-finder on the ball. Check out how his aggression increased post-All-Star, after the Kings traded Tyrese Haliburton and amidst injury struggles amongst their stars.

Mitchell already posted decent numbers as a driver early in the season, but with more on his plate without Haliburton and an intermittent Fox, he impressively boosted both his volume and efficiency.

As a passer, Mitchell formed an interesting tandem with Damian Jones... who is now a Laker. The two were the fourth-most frequent assist combo on the Kings last season. By spring, Jones was Mitchell's favorite target; he passed to the play-finishing center seven times per game.

We see how Mitchell is growing past straight-line drives. He dipped into his bag of herky-jerky crossovers and hesitation moves a bit more, exploded off of those plays, and then, zipped passes into Jones for finishes. The second clip against the Los Angeles Clippers particularly impressed me. Mitchell probed and engaged Ivica Zubac long enough to create a window for Jones, saw Reggie Jackson was backing out of the paint to cover Trey Lyles, and then, hit Jones for the easy dunk.

Of course, Mitchell won't be syncing up with the 7-footer next season. He might have Neemias Queta as a big-bodied dunker, but Davion will most likely be in tandem with either Sabonis or Richaun Holmes at center. Mitchell still flashed potential for a promising connection with those two based on his rookie work.

This trio of assists all came to Jones in the same April contest against the Suns. Mitchell hit him on a beautiful high-low feed in the first clip, and then broke two aggressive screen coverages later on. This type of success is exciting if you imagine Sabonis feasting as an interior hub, fed by Mitchell through aggressive defenses — or Holmes sealing down low and getting rewarded with a Davion dime.

Domantas Sabonis talks about working with Davion Mitchell, the next level of his & De'Aaron Fox's partnership, and Mike Brown. pic.twitter.com/svedS5LtWL

On the flip side, these bigs could also keep defenses from sending two at Mitchell — giving him more breathing room to create advantages. His mix of burst and patience allows him to explore more space, even in Steve Nash dribble-esque situations like these:

Mitchell slinks around the baseline and hits Harrison Barnes twice in this reel, once on a well-timed cut and another after drawing in Barnes' defender from the corner. These are two more examples of an NBA rookie maximizing his advantage and creating an advantageous setup for his teammate.

To truly unlock all of the driving and passing lanes, Mitchell needs to take a step forward as an efficient finisher and scorer.

Mark Schindler checked in on Mitchell's scoring progress for Basketball News last February, and I highly recommend the read since many of his observations still apply and are worth remembering as a starting point for this season. Since the article, Mitchell stayed in the ballpark as an overall shot-maker. He finished 60% of his shots at the rim on the season (about league average), but concluded as a 30.8% shooter from deep (not very good).

However, there's an intriguing silver lining in the weeds of his shooting splits.

Mitchell made only 40.0% of his pull-up shots all season and struggled mightily behind the arc (28.4%). But rookies typically struggle as individual pull-up scorers. This rookie, however, found a rhythm in the mid-range later on in the season.

According to Cleaning the Glass, a quarter of Mitchell's shots after the All-Star break came in the "long mid-range" area between 14 feet from the basket and the three-point arc. That put him in the 96th percentile for frequency at his position. Mitchell canned an impressive 47% of those shots (86th percentile), which were mostly pull-up attempts.

It's almost an old-school flashback to how teams used to generate mid-range looks. Mitchell often took screens at the elbow like these and, knowing the bigs would sag off because of his reputation as a shooter, he could easily settle into a more comfortable shot.

Mitchell also can stop on a dime like a madman. That already helped him to change speed and direction when driving; it also means he needs less time to jack up a rhythm mid-range shot.

No, this is not the most desirable shot from a game-planning perspective. But as dozens of players around the NBA can show, having a rhythm mid-range look is valuable and threatening. It also marks a starting point for long-range shooting potential, something Mitchell will obviously look to improve.

The former Baylor guard has past indicators of plus-shooting too. Mitchell built himself up to a 44.7% three-point clip in his final year of college. Per InStat Scouting, that included shooting 38% on pull-ups and 46% in catch-and-shoot situations. Sure, that was with a shorter arc, and Mitchell was probably due for some regression anyway. But let's not toss that year away as an outlier when he's still young and growing.

Davion Mitchell is getting in some work with Sacramento Kings assistant coach Doug Christie. pic.twitter.com/rfZvTwilxi

We don't know how the Kings' rotation will shake out under Brown yet, but from reports I've read, it seems Mitchell will at least begin the year as a third guard behind Fox and trade acquisition Kevin Huerter. Kings assistant coach Doug Christie told Hunter Patterson of The Athletic that his goal for Mitchell is to be Sixth Man of the Year.

If Mitchell were to ride the bench all season, that award is absolutely within reach. But I think the second-year guard could certainly challenge for a starting spot. "Off Night" is too valuable to what the Kings are trying to build on defense, and his budding talent as a creator will only help Sacramento ignite its offense.

Don't forget about Mitchell in the sea of 2022-23 breakout candidates.

Tinkering with a 🚨new chart🚨 to show 1-on-1 tendencies.

From 3 iso zones outside – is the player more likely to take a quick shot or drive right or left? In the post – are they more likely to turn over the left shoulder or the right?

Showcasing this part of the game is one passion of mine & is an area where I see there is still much room to grow in both application & acceptance! So here’s a thread on ways I visualize strengths & weaknesses of a player’s game ⬇️ pic.twitter.com/DEP9Amx7da