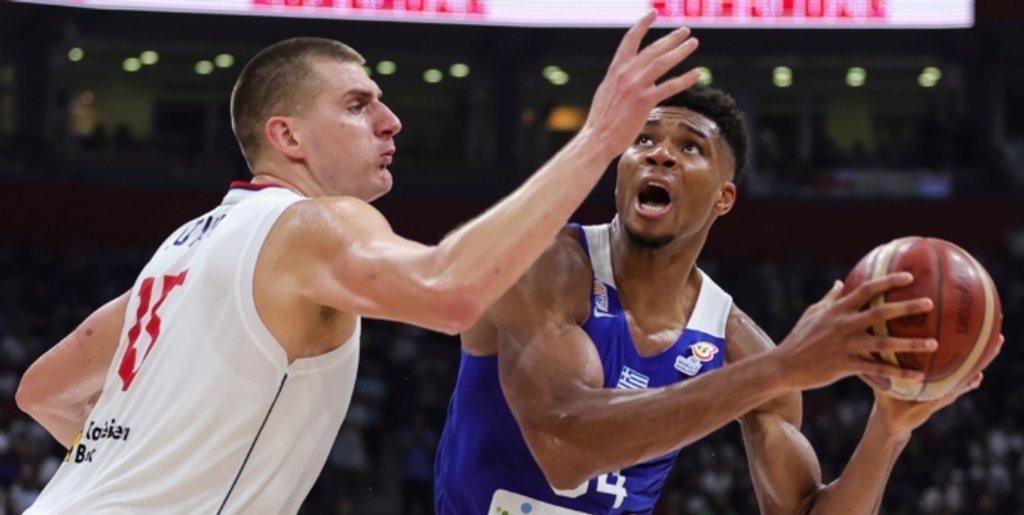 Jokic, Antetokounmpo, Doncic explain why Europe is harder than NBA

Giannis Antetokounmpo recently made headlines when he said that European basketball is "way harder" than the NBA.

Antetokounmpo made this claim unprompted during the Milwaukee Bucks' media day, after a reporter asked him about his experience playing in EuroBasket 2022 and how it made him better as a player.

"The game in Europe is way harder than the game in the NBA," Antetokounmpo said. "And I don't want to disrespect [NBA players]; the talent obviously in the NBA is way higher. But the space, it's just [different], like you have a lot of lanes to drive the ball and create. I think over there, it's more intense. People pick you up full-court, double-team you, they start from zone and then go man-to-man at the last second, they double-team you in the post, there's no lanes to drive, they're more physical... I don't know if it's because the talent is less so they need to be more physical to catch up, but it's harder.

"Playing over there, it prepares me for the [NBA] season. Playing with so much less space just helps me figure out things because now, when I go in an NBA game, I just feel like there's so much space for me to be able to operate in and create for my teammates and for myself. In the past, that's helped me a lot. In the first couple of games [after playing overseas], the court feels huge and I feel like I'm able to get to any spot I wanted."

Giannis explains why "the game in Europe is harder than the NBA" even though "the talent in the NBA is way higher." pic.twitter.com/curvd2FIuK

While these comments turned heads, Antetokounmpo isn't alone in this belief. Nikola Jokic, who also competed in EuroBasket 2022 over the offseason, was asked about Giannis' quotes and agreed.

“It's different. The floor is smaller, the bigs can be in the paint — there's no three in the key — the three-point line is shorter," Jokic explained.

Nikola Jokic on if European basketball is harder than the NBA:

“Is it harder? Yeah, just because [in Europe], you need to have really quick thinking.

In the NBA, if you go by the guy you can see the help coming. In Europe, the help is already there.” pic.twitter.com/7XhcrCbksP

Luka Doncic has been saying something similar since his rookie season in the NBA. On multiple occassions, Doncic has insisted that it's harder to score in the EuroLeague than it is in the NBA.

During an appearance on JJ Redick's podcast "The Old Man and the Three," Doncic revealed that he expected the NBA to be tougher and he was surprised by how quickly he was able to thrive, particularly as a scorer.

"Yeah, I was surprised,” Doncic said. “I didn't expect in my second year — when I started playing way better than my rookie year — to [do that]. When I came to the NBA, I never expected to be this good of a scorer. I was never really a scorer. I was really surprised.”

Doncic explained that even though NBA players are way more talented than EuroLeague players and "basically impossible to guard," he believes it is “100% easier” to score in the NBA because of the larger court, different rules and spacing. Doncic brought up the lack of a three-second violation too, just as Jokic did.

"In Europe, if you have a guy like Rudy Gobert, for example, he can stay in the paint for three seconds [or] however long he wants," Doncic said. "Just because of that rule, here in the NBA, you can have 10 more points easily...

"I would say that scoring is easier in the NBA just because of the different rules, the amount of space, the time... In EuroLeague, it's more team basketball, it's more tactics, and you have less time."