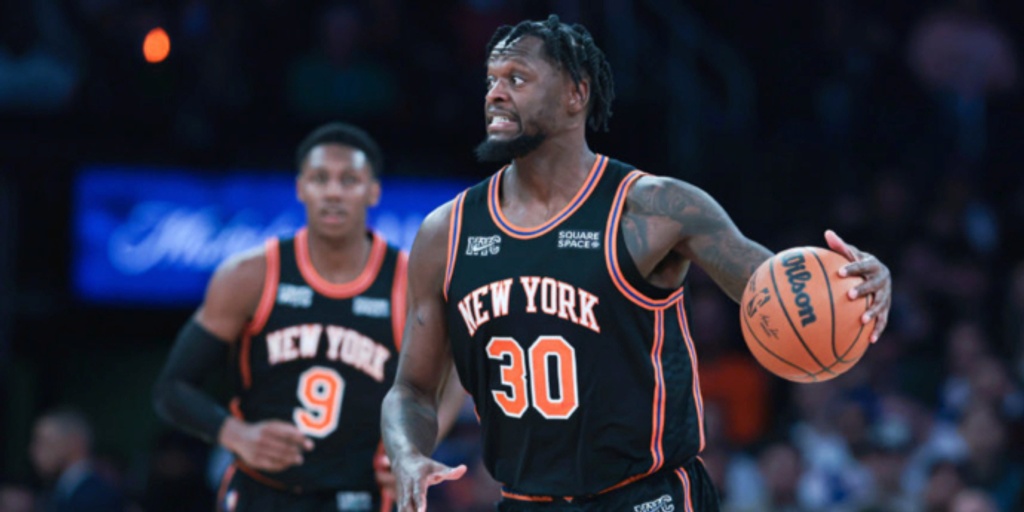 NBA Sour Rankings: Too much second-guessing

This week found me recalling an early-season article from Moke Hamilton on the Coach of the Year curse. Moke wrote this when the Knicks were 12-12; they're now 11 games under .500 and the aura surrounding Thibodeau's first season in New York is all but gone.

Sixers feeling comfortable switching Maxey on Randle and not doubling feels like the Knicks season in a nutshell. pic.twitter.com/1ws9NEhqbT

Julius Randle is nowhere near the All-NBA player he was last season, and the complementary players haven't challenged defenses consistently. Here we are with New York well out of the postseason race and once again figuring out a franchise direction for the season. There's a good quote from Evan Fournier hidden in this week's rankings.

Escaping the Sour Rankings: Utah has won 8 of its last 9 games, and Donovan Mitchell is on fire. With two great wins over the Dallas Mavericks and Phoenix Suns, the Jazz break free of this list.

The Zion Williamson saga was the dominant subject of NBA conversations last week. Mark Schindler's recent piece explains just how layered this situation is. Unfortunately, the off-court tension distracts and hampers the fact that this team has been really, really good out of the All-Star break. New Orleans steamrolled the Suns and Los Angeles Lakers. The Pelicans have the best defensive rating in this uber-small sample size, and have been much-improved on offense with CJ McCollum in the fold. I fully expect them to leave the Sour Rankings behind next week as long as there's no more Zion drama.

So... the Bucks have not been very good recently? Milwaukee is 12-12 in the 2022 calendar year and has lost 4 of its last 5 games. Since Jan. 1, the team has the 18th-ranked defense in the NBA and the 27th-ranked defense over the past two weeks without missing any of their signature defensive studs for extended periods. The Bucks face the Charlotte Hornets on Monday but then have the Miami Heat, Chicago Bulls and Suns on the schedule. They're still my pick to come out of the East, but I admittedly don't think the public sphere is showing enough concern.

Portland opened up the post-All-Star stretch by getting its doors absolutely smashed with two 30-plus-point losses to the Golden State Warriors and Denver Nuggets. The Trail Blazers are dealing with several serious injuries and simply don't have the depth to remain competitive at this stage. As much as we love Anfernee Simons and Josh Hart, they won't be the duo to lead Portland to Play-In games. Drew Eubanks is currently the only center in the rotation.

Gordon Hayward remains out with an ankle injury, but hopefully Charlotte is finding some of its footing amid a tense Eastern Conference playoff race. I'd like to shout out JT Thor, who has emerged as a rotation piece. The rookie second-round pick has played at least 10 minutes in each of the last five contests after not reach double-digit minutes since Dec. 13. I don't know how long this lasts, but I'm intrigued to watch more of him and see if he's grown comfortable enough to stay this season.

Jalen Green had put together a really strong stretch prior to his dud in Houston's 99-98 loss against the Los Angeles Clippers. The rookie has a 57.2% True Shooting percentage in February, is hitting 38.6% of his threes and averaging 16.5 points per game — all monthly bests outside of a December in which he only played three games. While the Rockets flounder on their current nine-game skid, at least Green is showing the scoring promise he's been labeled with throughout his basketball career.

Kind of a radical return for the Wizards, who lost a crazy 157-153 double-OT game to the San Antonio Spurs and fell narrowly again on the second night of a back-to-back versus the Cleveland Cavaliers. We're in the sans-Bradley Beal, pre-Kristaps Porzingis purgatory world, so Washington expectedly has some tough sledding coming out of the All-Star break.

One small stat of note: Rui Hachimura is canning 48.8% of his three-pointers since rejoining the team. That's a 16% spike from last season, and hopefully a positive indicator of Hachimura expanding his range since he was drafted ninth overall in 2019.

The Kings are 3.5 games out of a Play-In spot with 20 games to go, and are currently riding a four-game losing streak. It's desperation time for De'Aaron Fox, Domantas Sabonis and the rest of this win-now-ish group. Sacramento began the stretch run with two understandable defeats to Denver, but the schedule gets easier.

Four of the next five contests are against teams well under .500 in New Orleans, Oklahoma City, San Antonio and New York. It's imperative that the Kings find a groove over the next two weeks.

Dragic: "When you watch Kyrie, it feels like he's in the video games. It's just crazy how he moves & how he's making those tough shots."pic.twitter.com/eLfonZsyWO

Man, was that a necessary win against the Bucks on Saturday. Brooklyn numbed the 129-106 thumping by the Boston Celtics early in the week and grabbed a win with Kyrie Irving back as Kevin Durant nears a return. Unfortunately, it appears Nic Claxton is getting the short end of the stick again with Andre Drummond and LaMarcus Aldridge taking place over him in the rotation. Sigh.

“I feel like sometimes we’re looking at each other, second-guessing what play we’re going to run, who we’re going to go to... What is he going to do? We have no expectations right now from each other because we have no rhythm and no confidence in the fourth quarter. So again, as long as we don’t fix that as players, things are not going to change.”

That quote comes from Evan Fournier. It's not a great look at all for the Knicks, who have been outscored 252-161 in the fourth quarter and overtime over the past eight games, per SNY's Ian Begley. Yikes.

The Lakers are very much the viral laughingstock of the NBA right now after losing by 30 to the Pelicans. I'm not a fan of StatMuse and the way it uses its platform, but this was pretty funny:

The Lakers are 6-14 since Desmond Bane said "Them footsteps ain't scaring nobody."

Only the Rockets have fewer wins in that span. pic.twitter.com/M3tQ0UbfQg