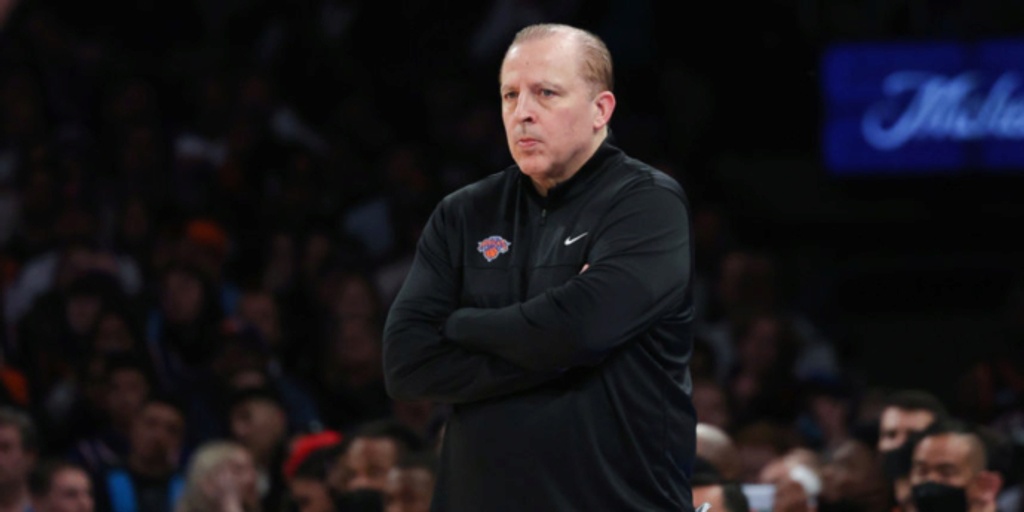 Believe it or not, in the NBA, the league’s Coach of the Year Award has become more like a kiss of death than a badge of honor.

There are worse things than being a .500 team in the NBA, but coming off of their 41-31 campaign last season, with the additions of Kemba Walker and Evan Fournier and the return of Mitchell Robinson, Tom Thibodeau and the Knicks hoped to be better.

Over the past 20 years in the NBA, we’ve witnessed the increasing disposability of the head coach. When things go wrong, the finger is usually pointed at the bench boss. Over in Los Angeles, the exact example is happening to head coach Frank Vogel, whose Lakers are having a tough time in the early going of the season.

And while preexisting relationships with the front office in New York are expected to provide Thibodeau with at least some semblance of security, the Knicks' struggles highlight an interesting trend: COY winners' teams struggling almost immediately after winning the award.

The league began naming a Coach of the Year in 1963 and last season, Thibodeau became just the ninth coach in league history to win the award multiple times. He previously won the award as head coach of the Chicago Bulls following the 2010-11 season, and it was shortly before then that a rather interesting trend became clear.

Popovich, Kerr, Casey and Nurse are still employed by the franchises with which they won the award; Popovich and Kerr are each notable for being the longest and third-longest tenured head coaches in the league. Now in his 26th season, Pop has patrolled the sidelines for the Spurs since 1996. Kerr assumed the helm for the Warriors just prior to the 2014-15 season, making this season his eighth. But they are the exceptions.

On average, since the 1999-00 season, the other winners coached their teams for an average of just 2.36 more years after winning the award. For the Oklahoma City Thunder, Scott Brooks had the longest post-award tenure of five years.

The shortest tenures following their COY award-wins belong to Hubie Brown of the Memphis Grizzlies and George Karl of the Denver Nuggets. Brown won the award in 2004, but resigned from the Grizzlies about six months later. He cited health concerns regarding his resignation, though there was speculation that some of the team’s players soured on him.

Karl was a part of a very interesting offseason in Denver. The Nuggets traded Carmelo Anthony away in 2011, but overachieved. Together with Masai Ujiri, Karl led the Nuggets to a 57-25 record in the first full season (post-lockout in '11-12) following Anthony’s departure. As a result, Ujiri was named the 2013 NBA Executive of the Year while Karl was named Coach of the Year. Within months, though, neither would be employed by the franchise. 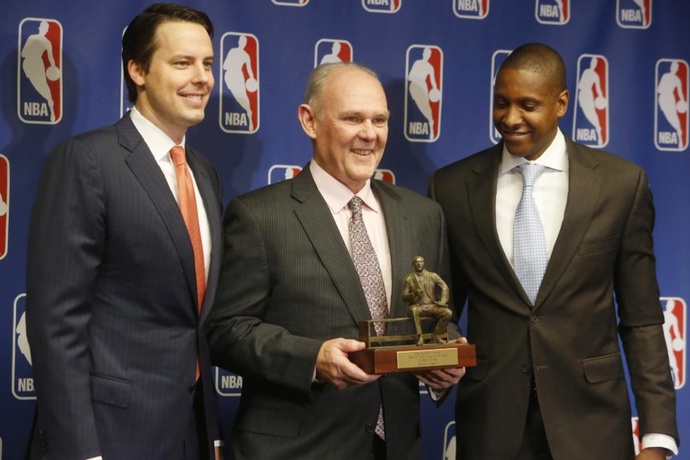 Ujiri received a lucrative offer to take over the Toronto Raptors' front office — he obviously accepted. Karl, who had one year left on his then-current deal was unhappy with Nuggets management for not rewarding him with an extension, and the franchise decided to relieve him of his duties.

Karl, unbelievably, was a reigning Coach of the Year who didn’t even make it through the offseason.

Although the tales of Brown and Karl are interesting in the modern history of the award, neither’s brief tenure — six months for Brown and 29 days for Karl — were factored into the earlier reported average of 2.36 years.

Larry Brown and Avery Johnson each got two seasons (or parts thereof), while Doc Rivers, Mike D’Antoni and Mike Budenholzer (with the Atlanta Hawks) each got three seasons. With the Chicago Bulls, Thibodeau got four more years, while Brooks, as previously mentioned, got five from Oklahoma City.

It’s ironic: Coaches usually win the Coach of the Year Award for defying expectations and leading their teams to better-than-expected results. But one can only wonder whether the endeavor is self-defeating.

Both the Atlanta Hawks and Phoenix Suns are considered, by some, to have overachieved last season, but in the NBA, what goes up... must stay up. As a community, we would be quicker to consider the Hawks and Suns as failures if they weren’t able to replicate last season’s results. The bar has been raised for them, and front offices have shown a propensity to judge their head coaches based on the highest watermark.

In New York, specifically, it is the front office that should carry the cross; neither Walker nor Fournier have translated well for the team, with point guard continuing to be one of the team’s biggest areas of need. At this point, one can only wonder what the Knicks could have looked like had they instead managed to sign DeMar DeRozan and Lonzo Ball instead of the duo ending up as teammates in Chicago.

It’s too early for the Knicks to panic, and way too early to consider that Thibodeau may not be the man for the job.

But all things considered, it’s at least interesting to take note of the fact that the NBA’s Coach of the Year Award may be the ultimate embodiment of a tangible irony.

Badge of honor? Or kiss of death?

There’s a clear trend that simply can’t be ignored.