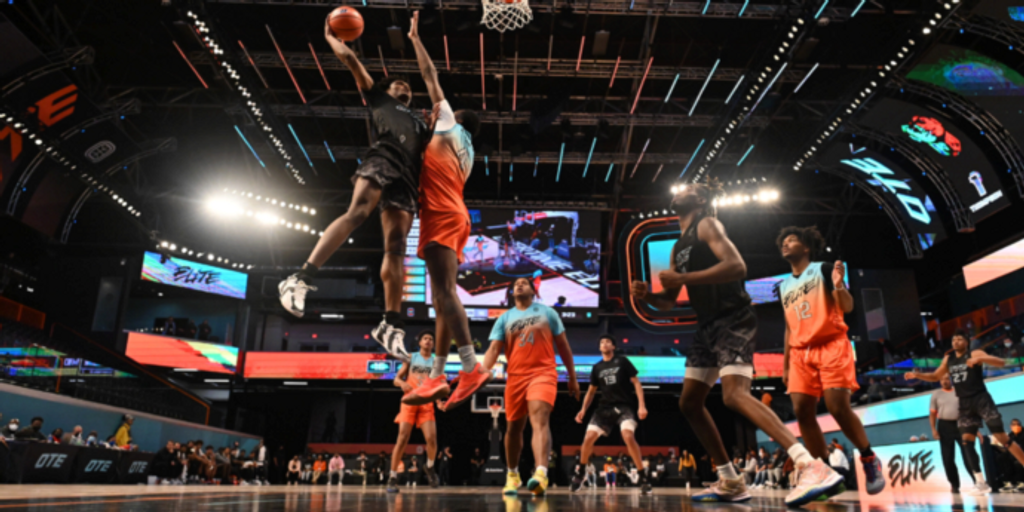 Two days after the 2020 NBA Draft on Nov. 20, I received a text message from former NBA player and coach Avery Johnson, who I had worked with at CBS Sports HQ:

Matt, I'm working with a group called Overtime. Can I connect you with the co-founder to share our vision for a major concept coming to market next year?

Shortly after, Overtime co-founder Zack Weiner connected with me. He didn't share any details about the "major concept," but he did say that he or a senior-level executive would call me in the following days.

I was appreciative that Avery had thought of me for their project, and I had every intention of hearing them out. However, I wasn't familiar with the company Overtime, and I'm regularly approached with new consulting opportunities, so nothing seemed to be all that atypical for me.

A few days later, I received a call from Shea Dawson, Overtime’s head of athlete relations. She shared some details about Overtime as a company and explained that they had a new project in the works that would "change the game." She continued to tell me that their group felt that my background, experience and skill set would be helpful to them. Unfortunately, she couldn't fill me in on the project's specifics, as I needed to sign a non-disclosure agreement first.

After speaking with Shea, although I still wasn't clear about it, I became more intrigued about the potential opportunity.

As I waited for the NDA to be emailed, I began doing my research on Overtime. I learned that the company was founded in 2016 by Zack Weiner and Dan Porter, who had worked together at WME, a leader in the talent agency industry. They started by raising seed money. Some early investors included former NBA commissioner David Stern and NBA star Kevin Durant. I then found out Overtime was a media company that creates unique content and targets a younger audience. (By 2019, Overtime was generating over a billion video views per month.)

So naturally, I became increasingly intrigued to learn about this mysterious project.

I finally received the email from Shea that included the NDA. I signed it and sent it back almost immediately.

Then, at last, the phone rang. It was Shea:

Matt, I'm so excited to share the details with you. We are creating a new professional league for high school-aged players. We want you to help us pull it together.

I had a lot of questions:

Despite my questions, I agreed to explore ideas to get involved. So for a couple of months, I had a handful of video conference calls with Shea and Aaron Ryan, a former executive in the NBA’s office who was working as a consultant for the newly proposed and unnamed league.

Everything finally began to take shape by mid-January 2021. They named the league Overtime Elite (OTE). Aaron was hired as commissioner, while former NBA player and executive Brandon Williams was named head of basketball operations. In addition, I agreed to a short-term consulting deal to become a scouting advisor for the group. 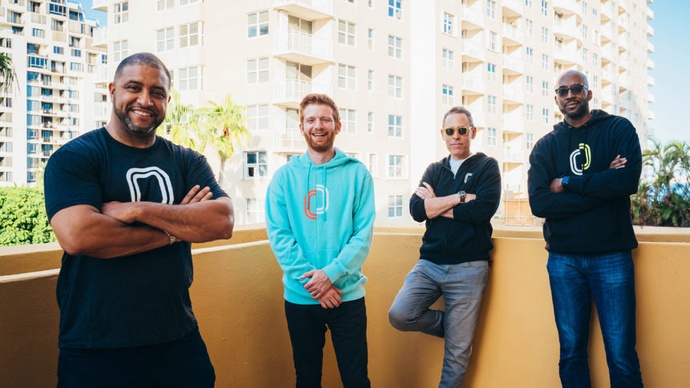 On March 4, 2021, OTE was publicly announced, releasing some project details. For starters, Overtime successfully raised $80 million. The newly raised money was allocated to build an arena in Atlanta, Georgia, and provide the league's players with salaries of a minimum of $100,000 per year among other things. The news spread like wildfire, and the feedback was mixed.

On one hand, NBA commissioner Adam Silver seemed to be optimistic, stating that he didn't have a problem with young players being paid and thought optionality was good. But, on the other hand, many of my friends in the industry were tearing the idea apart — some publicly and many behind closed doors.

What was the big issue with OTE, you ask? Well, I'll get to that in a minute.

As a scouting advisor, I assisted in setting up the scouting department and evaluated prospective players. Our group worked hard, and we did a good job. However, once OTE began recruiting, negotiating and looking to sign players, our scouting department shifted from evaluating players to recruiting them.

It was a necessary shift for the group, undoubtedly; however, I felt it put me in a compromising situation considering my involvement in so many different areas of basketball, including running NBA Draft and scouting coverages for BasketballNews.com. I enjoyed working for OTE, but I decided to leave the group to avoid further conflicts of interest.

My last day working for OTE was May 14, which was a little over two months from OTE's launch date, four months from my start date with the company and six months since I first heard from Avery.

I may have left, but of course the show went on.

Our scouting department identified the right players. Williams and Tim Fuller, the director of scouting and recruiting, did a great job of recruiting them. Then, on May 21, one week after I left the group, OTE announced that the league signed its first players: Matt and Ryan Bewley, five-star prospects from the Class of 2023. Then, Ausar and Amen Thompson after them. Then, Jean Montero, a top-rated point guard from the Dominican Republic. After that, there became a steady flow of new signings, one after another. OTE was rolling!

On Oct. 24, they hosted their first Pro Day. Following the event, NBA personnel and media members raved about the facilities and the talent level. Unfortunately, I wasn't able to make it due to scheduling conflicts. I planned to attend a couple of days of their games in December, but out of an abundance of caution and rising numbers of COVID and flu cases around sports, the games were cancelled.

A few weeks ago, I finally made my way out to Atlanta to see OTE's finished product. In addition to seeing all of the players that our scouting group evaluated and discussed for months, I was able to see the OTE Arena with my own eyes.

While working for OTE, I was on semi-regular video conference calls hosted by Tim Katt, who spearheaded the arena's development. I expected it to be impressive, but my expectations were far exceeded. I was blown away by the building as soon as I walked in.

The bright lights, advanced technology, music and cameras were the first things that jumped out. There was no denying that it was a unique place. Keep in mind, I've spent my entire life in and around basketball, and I have seen the game from just about every angle possible, all over the world. So I wouldn't consider myself someone easily impressed with basketball facilities — and I was impressed! 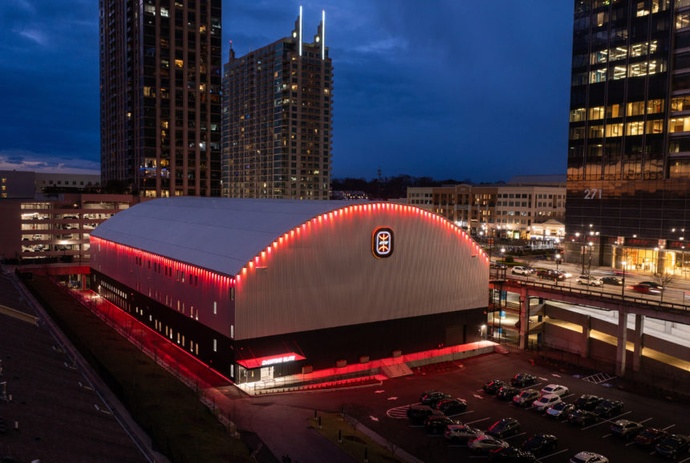 My former co-workers, Louis Lehman and Matt Verden, gave me a tour throughout the facility. The more I saw, the more impressed I became. It wasn't the glitz and glam of it that impressed me as much as the resources I saw for young players to develop. For example, the players are given access to a personal chef for three meals per day, an incredible practice facility and high-level strength-and-conditioning spaces. Additionally, OTE has a well-built (and deep) coaching and support staff led by former NBA player and college head coach Kevin Ollie. Nowhere else in the world provides comparable levels of resources to players ranging between 16-18 years old.

Once the games started, the talent popped. Montero is the main prospect for this year's upcoming draft. He is likely to be the first draft pick to come out of the Overtime Elite program. The Thompson Twins look like lottery picks in the making for 2023. And then, guys like Alexandre Sarr and Tyler Smith look like they have promising NBA careers in their future too. And that's just naming a few; there’s a ton of talent currently under contract.

I spent three days in Atlanta spending time with the OTE staff and becoming more familiar with the setup and evaluating their young prospects. On my flight home, I gathered my thoughts. I couldn’t help but feel that OTE is generally misunderstood. I think many people only see "fluff." However, I see it differently.

The cameras, the bright lights, loud music and the content the league creates are the vehicles to generate the money (via sponsorship and advertising) to be able to provide such an incredible infrastructure to develop players’ marketability — but more importantly, to help them grow as basketball players and young men.

Considering my role and background, I tend to become hyperfocused on young prospects' development as basketball players but I'd be remiss if I didn't mention the education element of OTE as well. On the league's website, it states, "OTE offers a direct-instruction model led by individual instructors who teach both 1:1 and in small group sessions featuring a 4:1 student-teacher ratio. OTE supplements a traditional course offering with a focus on life skills including financial literacy, media training, and advocacy and sports, and business of basketball."

That all sounds great, but what it doesn't mention is that the owner and co-founder of Overtime, Porter, served as the first president of Teach for America. Since education is a vital part of Porter's background, education has been a focal point since the idea's inception. So although they provide a non-traditional education, I can assure you that OTE’s education program is well buttoned up. 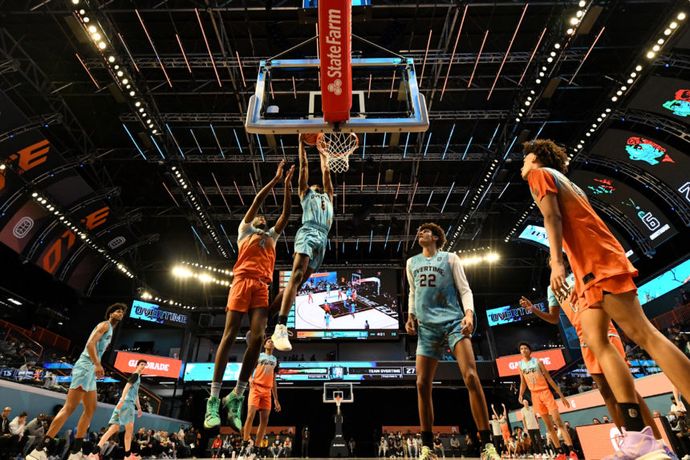 Overtime Elite is a special place and a terrific option for top teenage basketball players. I am proud to have played a small part in helping it go from being an ambitious idea into a successful reality.

But I'm going to address the elephant in the room now...

What's the catch with OTE? (Yes, there is one.)

For prospects to join the league, they have to sacrifice their college eligibility and instead, commit to a professional path. This alone has made the league controversial and subsequently labeled a disruptor in the basketball industry.

However, recently, it was announced that the NCAA had approved OTE players to participate in NCAA-certified AAU events this spring and summer.

Is this the first step towards players being able to sign with OTE while retaining their college eligibility? I'm not certain, but I sure hope so.

With all of that said, I'm going to leave you by posing a few questions:

The questions are intended to be rhetorical, of course. However, I believe that they are essential.

So let's keep asking those questions!