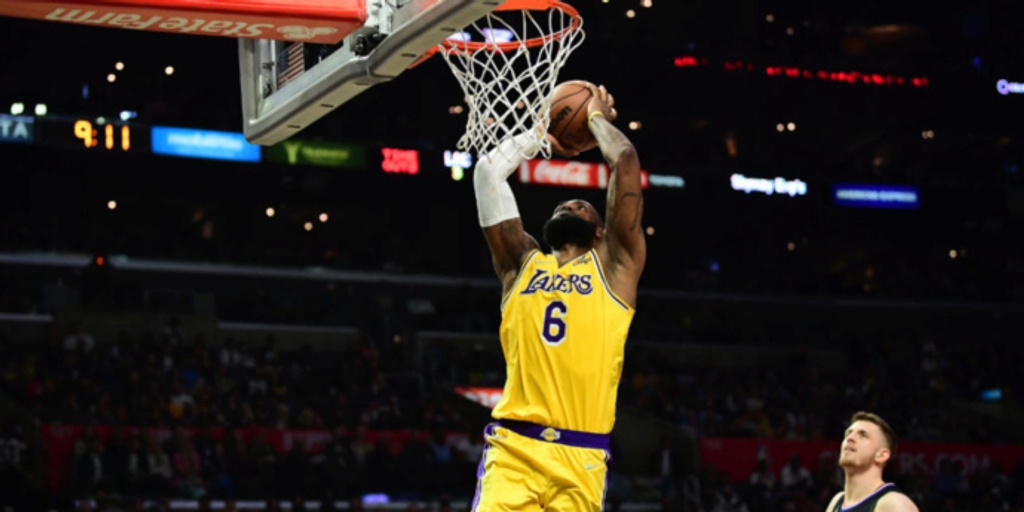 NBA Sour Rankings: Look on the bright side

The Sour Rankings are all about spotlighting disappointment, negativity and drama in the NBA. As the writer of this column, even I get a little bummed out after writing so many critical paragraphs.

So we're mixing up the agenda this week. You'll still receive the same Sour Rankings, but I'll additionally provide a positive development for each squad. Some will be obvious (LeBron James dropped 56 two nights ago), and others will hopefully surprise. For fans of these teams, the positivity should at least provide some much-needed comfort.

Escaping the Sour Rankings: The Milwaukee Bucks didn't stay long, now riding a four-game winning streak after picking up three statement wins against playoff competitors in the Miami Heat, Chicago Bulls and Phoenix Suns. The New Orleans Pelicans also received some positive news on the Zion Williamson front to pair with their solid play, so they escape as well.

The Raptors have come out from the All-Star break just 2-5, with both those wins coming versus the Brooklyn Nets. They're in somewhat of an Eastern Conference standings bubble at seventh, currently three games behind the Cleveland Cavaliers and three games up on eighth place (a triple tie).

Unfortunately, Malachi Flynn is out at least 10 days with a hamstring injury. But his post-All-Star run is worth highlighting because it was sneaky-unreal. Flynn averaged 12.5 points per game, shot 42.3% from long range and handed out 27 assists against a single turnover in six contests. Hopefully he can return from injury soon because he really appeared to be putting things together offensively.

We're once again at the point of questioning a surprisingly successful Hornets defense. I wrote a whole Stats Notebook on Charlotte's defense over a month ago and the team responded by being abjectly terrible.

Well, now the Hornets are eighth in defensive rating since the All-Star break and one of five NBA teams with top-12 metrics on both sides of the basketball. Is this a real sign of progress or just another small-sample mirage? We'll find out pretty soon.

He's been leading all rookies with 18.1 points per game since Feb. 1. Green is attacking the rim with effort (79th percentile in frequency, per Cleaning the Glass) and finishing effectively (64.0% at the rim, in the 74th percentile). The highlights alone have breathed some life into Houston, which finally snapped a 12-game losing streak with Sunday night's victory over the Grizzlies.

So Golden State is 2-8 in its last 10 games, and Andrew Wiggins has notably underwhelmed since his first All-Star appearance. Still, we're keeping things positive, and the best part of the Warriors' past month has been the rise of two lottery rookies.

I wrote about Jonathan Kuminga recently, so I'd like to focus on Moses Moody here. He's played in 11 games for the Warriors since the start of February and knocked down an even 50.0% of his threes while averaging 17.1 minutes per contest. Regression is inevitable, but it's nice to see Moody's shot translating so far, as he moves up from the G League to a larger presence in the rotation.

Washington is about to hit a great stretch of its schedule despite heading out west. Just 3 of the next 8  games are against teams over .500 (Los Angeles Clippers, Denver Nuggets and Warriors) and the other five matchups include the New York Knicks, Portland Trail Blazers, Los Angeles Lakers (twice) and Rockets. This is a great opportunity for the Wizards to string together some wins as their closest East competitors struggle. Washington is still just two games back of a three-way tie for eighth place in the standings. With Kristaps Porzingis now healthy, it's go time for a playoff push.

After losing four straight games by 14 or more points (three of them by at least 30), Portland has entered the cliff-hanging window for its playoff hopes. But let's give Brandon Williams the name recognition he deserves.

The 22-year-old guard went undrafted this past season, tried out for the Westchester Knicks in the G League and promptly tore it up with the team this season. He's now earned a two-way deal with the Blazers, and is averaging 14.8 points in 21.4 minutes per game over his last four contests while making 42.9% of his threes. These types of stories never get old.

The Kings scrounge up a couple of wins against the Oklahoma City Thunder and San Antonio Spurs to keep their postseason hopes barely alive. De'Aaron Fox is certainly doing his best to put any remaining ire about trading Tyrese Haliburton behind the team. Fox has put up a whopping 28.3 points per game since the start of February, and sports a 36.5% three-point clip. We've said this several times when Fox heats up, but if that jumper is even semi-legit, he becomes a wholly-different caliber of offensive player.

LeBron James is just the fourth NBA player ever to score 50 or more points at over 37 years old. His 56-point outburst was historic on several fronts, and it reminded the city and the league that — when all else is failing — The King is still The King. In fact, LeBron's 29.4 points per game are the fourth-most he's had in any NBA season, and the most since the 2009-10 campaign in Cleveland. Level it out, and his per-36 scoring output of 28.8 points is the highest he's ever had.

Ariel Pacheco is one of my favorite Knicks follows, so I'll let his Twitter thread do the talking after a great win over the Clippers:

Knicks/Clippers - 6 things that stood out

I will beg for more Deuce McBride-Immanuel Quickley minutes as long as I live, but this small sample bodes well for the defense of the future. New York actually has the ninth-best defensive rating in the NBA since the All-Star break (small sample size alert), so there may be some good development happening.

So, the Nets do have the league's second-worst defense since the All-Star break and lost at full strength to the Boston Celtics in a huge Sunday matinee game to move to 3-13 since Feb. 1.

However! Let's talk about Bruce Brown.

The 25-year-old has made 50% of his three-pointers in that 16-game stretch. He's up to 37.7% on the season, which would be a major career-high clip. Brown isn't exactly a Joe Harris replacement; he takes just 1.1 threes per game and hasn't earned the full respect of the defense. But he is probably Brooklyn's best perimeter defender, and if he can be solid enough on offense, the Nets could really use someone of his style.