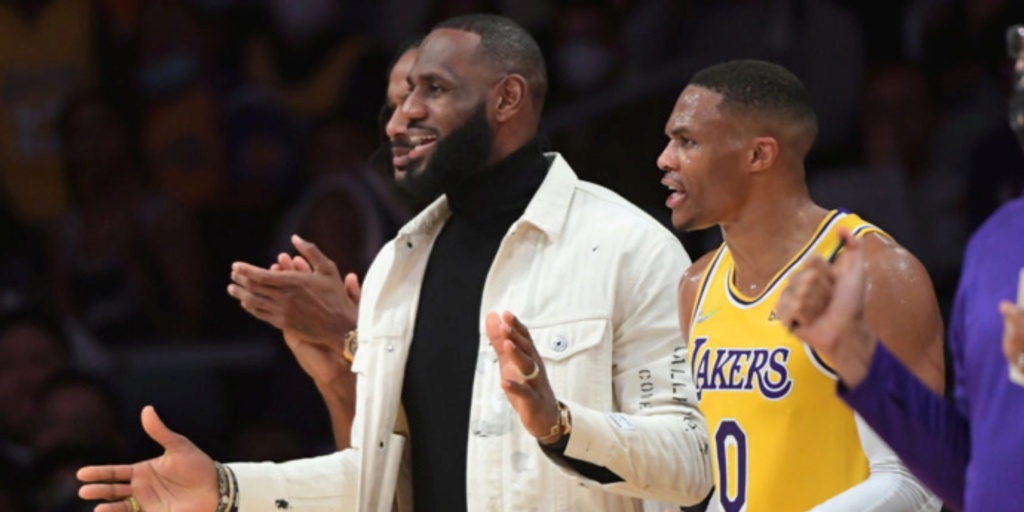 How much should poor play be discounted by injuries?

It's one of the core philosophical questions of these Sour Rankings, and a layered thought that produces different answers in different viewers. Obviously, fans should feel distraught when a player gets hurt, especially when it results in a long-term injury. But if a team starts losing in the absence of key contributors, how much does that matter?

My answer is: It depends. This week (spoiler alert), the 5-5 Los Angeles Lakers make their Sour Rankings season debut in part due to LeBron James being sidelined. The Milwaukee Bucks, however, do not, with Brook Lopez, Jrue Holiday and Khris Middleton out.

Milwaukee knows what it has in about 85% of its roster, and things should click when those players return. But the Lakers are still figuring things out, and when the centerpiece of all centerpieces goes down for an extended period, that severely impacts team development. You'll hear more about the Lakers below.

The central question is ultimately this: How good should you feel about the direction of each franchise? Some teams value wins this season and paths to a title, while others are looking down the road at long-term pieces. Let's get going:

Escaping the Sour Rankings: The Brooklyn Nets are cruising as winners of four straight, and have potentially outlived their place in these rankings for good. Portland continues to split weeks, but at 5-5, has room to grow once Damian Lillard rounds into form.

Meanwhile, the Los Angeles Clippers used a 4-0 week to complete turn their early-season outlook around. And though I still loathe much about the Dallas Mavericks, they are 6-3, and Luka Doncic's buzzer-beater was perhaps the highlight of the past week,

Miles Bridges and LaMelo Ball may be lighting things up, but the Hornets have lost four games in a row thanks to some eye-sore defense. Charlotte ranks 29th in half-court points allowed per play, according to Cleaning the Glass, and has given up an average of 121.8 points during its four-game skid.

Opponents have been shooting a 56.1% Effective Field Goal percentage (second-highest) and taking 19.3 free throws per 100 shots (fifth-most). Charlotte has to clean things up with some high-powered offenses coming down the pipe.

The Rockets have the longest losing streak in the NBA at eight games. That's not necessarily a huge issue given the team's rebuilding focus. But Houston has been difficult to watch at times as the backcourt of the future undergoes some serious growing pains.

Kevin Porter Jr. and Jalen Green are averaging a combined 8.2 assists against 7.4 turnovers per game, while neither holds a True Shooting percentage over 48% (very bad). Houston turns the ball over more than any other team, and fans just kind of have to ride the wave at this point.

Detroit's offense has been blindingly bad for most of the season. The Pistons sport a league-worst 45.2 eFG%, which is over three percentage points lower than the No. 29 Oklahoma City Thunder; for context, three percentage points separate OKC from the 19th-ranked Clippers. Cade Cunningham cannot buy a perimeter bucket to save his life (though he's still shown positive flashes early), and neither can most other Pistons players.

Cade Cunningham isn't super bursty, isn't an elite vertical athlete. He'll win with craft and power. Enjoying the way he's using his shoulder to create space -- no real need to push off and leave yourself susceptible to offensive fouls. pic.twitter.com/pRg0Z2V0Lr

However, I'll concede a small positive: Killian Hayes has made 38.1% of his threes, albeit on just 21 total attempts. He's found some touch from the corners with a 40% clip. I'd feel a lot better if the rest of his scoring efficiency wasn't so abysmal.

Even without Malcolm Brogdon, the Pacers found a nice little groove this week, going 3-1 with wins over the Spurs, Knicks and Kings. They're still middle-of-the-road for most basic metrics in classic Pacers fashion, but things were really getting scary, and maybe some positive momentum can get them out of the Sour Rankings next week.

I'm intrigued by this four-man group of Chris Duarte, Caris LeVert, Domantas Sabonis and Myles Turner. That's a lot of scoring and playmaking versatility in my mind, and it could flourish with Brogdon or TJ McConnell at point guard. The aforementioned group has outscored teams by 26 points per 100 possessions in 64 minutes together (smal sample size alert).

What's going on in Atlanta? The Hawks went 1-3 this week — though they were tough losses against Brooklyn, Utah and Phoenix — and are 1-5 in their last six games. Surprisingly, this group ranks 28th in three-point frequency, per Cleaning the Glass. That's despite John Collins, Bogdan Bogdanovic, Danilo Gallinari and De'Andre Hunter all shooting over 40% from downtown. Atlanta is also 23rd in rim-attempt frequency, but second in mid-range frequency. Weird.

In a 1-2 week, L.A. lost and struggled to score against two pretty terrible Thunder and Blazer defenses. In fairness, the Lakers were without Anthony Davis against Portland, and Carmelo Anthony has really shined as a spark plug off the bench.

Russell Westbrook to a reporter asking about the final possessions: "You saw it. Don't ask me questions you know the answer to. You seen it. I lost the ball. I missed a three. There's nothing to it." pic.twitter.com/7aeYFlwxFH

But this is all about LeBron James, who the Lakers said will miss at least a week with an abdominal strain. Los Angeles' former trainer thinks it could be more like 4-8 weeks. It's extremely ominous that the 36-year-old James is missing extended periods in multiple seasons after multiple shortened offseasons... and that the Lakers are struggling to win without him.

This rapid downhill spiral feels all too familiar for Minnesota, who lost all three matchups this week by double digits. The Timberwolves take the most threes in the entire NBA, but make just 32.1% of their attempts. They're also making a mind-numbing 22.8% of their corner three attempts, nearly eight percentage points worse than any other team.

Quite honestly, I don't see how the latter rate improves looking at this roster. D'Angelo Russell and Anthony Edwards, who are streaky in their own right, won't be chilling in the corner often. Outside of Malik Beasley, the rest of the team doesn't possess much perimeter upside, meaning it's on Beasley and Karl-Anthony Towns to carry the load.

What an absolutely wacky week for the Celtics. They were outscored in that 39-11 fourth quarter in the loss to Chicago (prompting a players-only meeting), and then stomped the Orlando Magic and Miami Heat on a back-to-back before losing in heartbreaking fashion to the Dallas Mavericks on Saturday. Now Boston will be without Jaylen Brown for 1-2 weeks due to a hamstring strain.

It feels like everyone, including myself, has been shouting at the team to attack the basket. The Celtics are 27th in the league in rim-attempt frequency despite being ninth in field goal percentage at the basket. The problem is they lack the consistent downhill players to apply more pressure outside of Dennis Schröder.

Sure, the Suns are on a four-game winning streak. But that pales in comparison to the bombshell ESPN report on Robert Sarver's alleged racism and sexism that was finally released this past Friday.

Obviously, due process exists, and the NBA will have to finish its full investigation before final judgement is passed. But this report didn't just contain one-off instances; there was a clear alleged pattern of discrimination and disrespect that began with Sarver and spread throughout Suns management. It's yet another reminder of how easily owners and teams can cover up toxicity in the workplace.

Yeesh, the Pelicans are awful. They've lost six in a row, and the margin of defeat has increased with each subsequent contest. New Orleans isn't doing anything particularly well right now outside of rebounding, and that's essentially attributed to Jonas Valanciunas and his 14.1 boards per game. Pick a non-rebounding team stat, and you'll likely find the Pelicans near the bottom. I feel for Brandon Ingram right now.