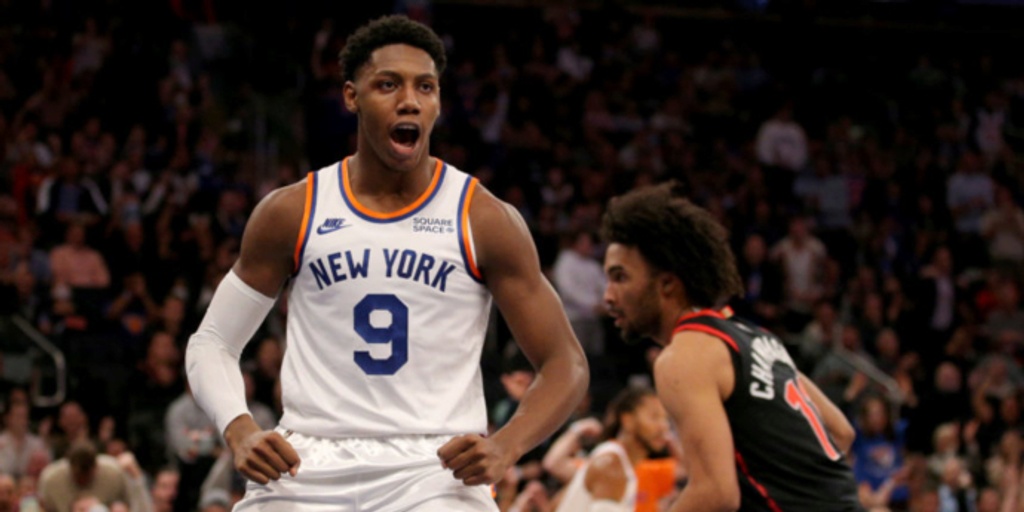 It’s time for the latest installment of our daily NBA picks against the spread, including over/under power play PrizePicks props here on BasketballNews.com. Make sure to listen to “Nothing But Bets” every single day as we provide you the winning edge for NBA betting.

All odds are provided by TwinSpires Sportsbook. Player over/under prop picks are from our sponsor, Prize Picks. Without further ado, it’s hammering time!

We were able to grab this line when the Sixers were somehow still favored this morning after Joel Embiid was ruled out due to entering COVID-19 health and safety protocols. Embiid now joins Tobias Harris, Matisse Thybulle and Isaiah Joe here for Philadelphia, and it's our first true moment where coronavirus has impacted a team this season. With Embiid out, we hammered the Knicks as the 0.5-point pick ‘em underdog instantly. Even on the second night of a back-to-back, New York holds the advantage here against the Embiid-less Sixers. Here are some over/under props we’re rolling with tonight on PrizePicks: Julius Randle over 21.5 points, R.J. Barrett over 16.5 points, Evan Fournier over 14.5 points, Fournier over 2 threes.

It’s hard to ever bet against the Nets, especially when Kevin Durant is rolling the way he is right now. Even on the second night of a back-to-back against a very much improved Bulls team, I like hammering the underdog here in Brooklyn to cover the spread and win outright. Expect a monster outing from Durant in a high-scoring affair against the Bulls. If James Harden finds a groove — the Nets’ X-factor — he could put this one over the top for the Nets to win by multiple possessions. On PrizePicks, here’s what I’m going with: Durant over 27.5 points, Zach LaVine over 25.5 points, DeMar DeRozan over 23.5 points, Harden over 8.5 assists, Harden over 2.5 threes.

This one isn’t going to be close, in my opinion. New Orleans is in a full-on tailspin right now, especially without Zion Williamson and Brandon Ingram. It’s unfortunate because there was high hopes for the Pelicans entering this season, but now they’re destined for a top lottery pick once again. In Dallas, expect the Mavericks to slaughter the Pelicans thanks to Luka Doncic’s brilliance and the return of Kristaps Porzingis. Honestly, I was surprised the spread wasn’t higher for this game. Hammer the Mavericks on the point spread, plus the following PrizePicks over/unders: Doncic over 26.5 points, Porzingis over 15.5 points, Tim Hardaway Jr. over 15.5 points, Doncic over 8.5 assists, Doncic over 7.5 rebounds.

This is a matchup I waffled back-and-forth on all morning before recording the latest episode of “Nothing But Bets,” but I’m siding with the home team here in Memphis. These two teams are evenly-matched, and it's a game I’m looking forward to watching in tonight’s awesome slate of NBA action. Ja Morant and Karl-Anthony Towns should have huge outings, but I trust the Grizzlies’ role players more to step up than Minnesota’s. That’s why I’m picking the Grizzlies to win and cover the 5.5-point spread. However, I don’t feel like it’s a 100% lock like I usually do. Tail me on the Grizzlies and roll with this PrizePicks power play: Morant over 24.5 points, Towns over 23.5 points, Steven Adams over 8.5 points, Adams over 8.5 rebounds, Morant over 7.5 assists.

Another early statement opportunity is on the horizon for Miami on the road in Denver against last season’s MVP. I’m riding the Heat wave right now, and who wouldn’t? This team continues to impress at every obstacle with nearly flawless precision. Against an inconsistent Nuggets squad who fails most nights to have someone step up alongside Nikola Jokic, Miami holds the advantage. The Heat will want to make this a slow-paced, grinder of a game. If that happens, hammer the Heat with emphasis on the 1.5-point spread. That’s how I predict the must-see matchup, but don’t be surprised if Jokic single-handedly keeps the Nuggets in it throughout. Let’s jump over to our PrizePicks props for Nuggets vs. Heat: Jokic over 24.5 points, Jimmy Butler over 21.5 points, Bam Adebayo over 8.5 rebounds, Butler over 5.5 assists.

This Warriors team is so much fun to watch. Sure, Stephen Curry is the main reason why, but these role players, along with Jordan Poole stepping up into a No. 2 scoring role, have been a pleasant surprise. For those who wagered on the Warriors being a top-three seed in the Western Conference — kudos to you, because I didn’t see that happening. Once Klay Thompson is officially back, it’s going to be hard to knock the Warriors off the top tier. On the second night of a back-to-back against Trae Young and the Hawks, I’m still going to side with Golden State to win. It’s going to be a very entertaining game, but it’s almost like Miami, where you have to wager on the Warriors at this point. As Golden State continues rolling, hop on the train from a betting perspective and lay the points for the home team. On PrizePicks, here’s our over/under props: Curry over 28.5 points, Young over 23.5 points, John Collins over 14 points, Bogdan Bogdanovic over 2 threes.

The spread feels way too low for this game, especially with the Kings on the second night of a back-to-back. Phoenix is really finding an amazing groove right now, even as Deandre Ayton sits out once again due to a leg contusion suffered last week. Chris Paul and Devin Booker should dominate tonight in Sacramento, so I’m easily hammering Phoenix to cover the 3-point spread as road favorites. The Suns are showcasing recently why they are still in the elite tier of the Western Conference, and the train keeps rolling here as they cover with ease. On PrizePicks, let’s lock this power play in: Booker over 25.5 points, Richaun Holmes over 13.5 points, Paul over 9.5 assists, Holmes over 9 rebounds, Booker over 2 threes.

It’s hard to feel comfortable about this game from either perspective. Without LeBron James, the Lakers are a complete mess. Meanwhile, the Hornets can’t stop anyone from scoring in bunches, as they rank last in the Association in defensive rating. For this matchup, we’re going to roll with the Lakers to win and cover the 2-point spread at the Staples Center. It wouldn’t be surprising to see another Lakers letdown, but they feel due for a solid win right now. Let’s lock these Hornets-centric over/under props in on PrizePicks: Miles Bridges over 20.5 points, LaMelo Ball over 6.5 assists, Bridges over 2.5 assists, Ball over 2 threes.