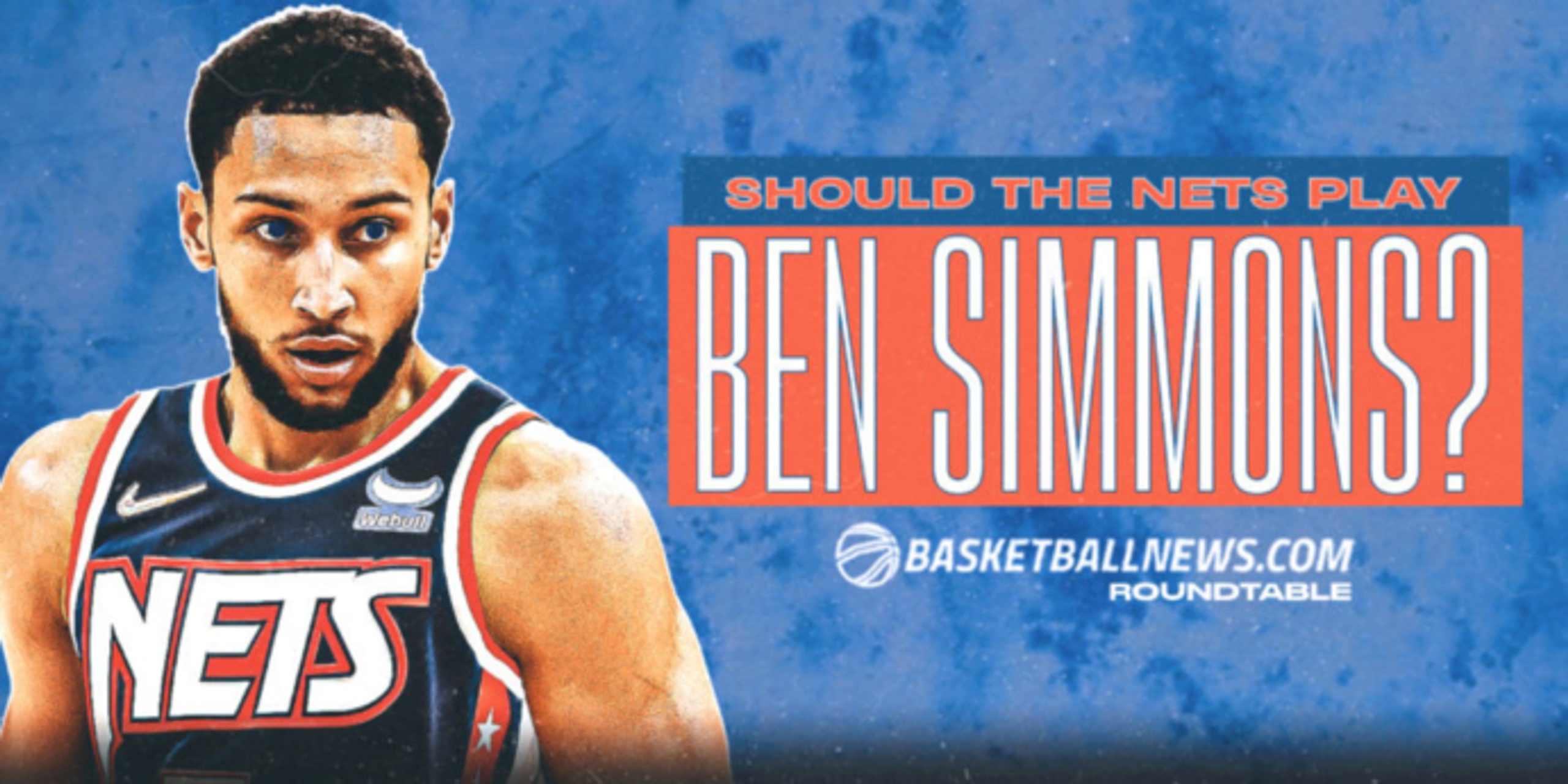 It was Game 7 of the Eastern Conference Semifinals, which the Philadelphia 76ers lost to the Atlanta Hawks, 103-96. Simmons contributed 5 points, 13 assists, 8 rebounds and a steal, but the most memorable play occurred with 3:30 left in the fourth quarter when he passed up a wide-open layup. The loss ultimately led to the Simmons saga, which culminated in a trade to the Brooklyn Nets.

Simmons has yet to suit up for the Nets, but that may change very soon. ESPN’s Adrian Wojnarowski reports that Simmons is targeting Game 4 against the Boston Celtics to make his season debut. The 25-year-old has been dealing with a herniated disc in his back, but he's made progress this week.

Based on Ben Simmons’ progress in practices this week – and the anticipation of him further accelerating in the coming days – Game 4 vs. Boston on Monday is looming as a realistic target for his Brooklyn debut, sources tell ESPN.

If Simmons does get cleared, does it even make sense for Brooklyn to play him against Boston? Do the risks outweigh the rewards? We asked our BasketballNews.com writers to weigh in:

Mark Schindler: I'd probably lean toward not playing Ben. I understand the impact he could have, but the precedent of bringing players who haven't logged a regular-season minute into the middle of a playoff series makes me lean "no." I don't think it's as simple as, “Well, he could just play 15-to-30 minutes” because he needs rhythm. The players in the rotation already have a rhythm, and even then, it's still being sorted out. Brooklyn’s rotation has been in flux and has varied all year, and it finally feels close to right. Given that, as well as Ben’s injury timeline, it's murky for me.

Nekias Duncan: The Nets could use Simmons, particularly on the defensive end. They currently don't have a forward-sized player aside from Kevin Durant who is completely trustworthy. Considering the role Simmons would have to play on both ends, I don't think it'd be a crazy adjustment period for him. Defend, push after misses, execute some handoffs and hang around the dunker spot otherwise.

Alex Kennedy: This is complicated. Simmons has been sidelined for nearly a year, so he's going to be rusty. It also seems unlikely that he'll be 100% healthy. A few weeks ago, Simmons needed an epidural because his herniated disc was causing him so much pain. Also, he hasn't played with any of these current Brooklyn players (aside from 49 games alongside Seth Curry in Philadelphia). He'll be trying to learn a new system, a new role and new teammates' tendencies on the fly; meanwhile, the other players will be trying to adjust to Simmons and the new rotation. If that wasn't tough enough, Simmons also has dealt with confidence issues and has struggled in high-pressure moments. This isn't throwing him into the deep end; it's tossing him into the Mariana Trench. I understand the temptation to play him since he's a Defensive Player of the Year runner-up, and the Nets had the NBA's 15th-ranked defense this season (third-worst among the East playoff teams). There's no question that he'd help on that end, especially against Jayson Tatum and Jaylen Brown. Still, I lean toward sitting him and focusing on next season. Playing him is the high-risk, high-reward move, but it feels like that could blow up in the team's face.

Sharon Brown: I would play him in limited sets. Simmons' role with the Nets is different than it was with the Sixers. Defense comes naturally to him. He will be able to get rebounds, alter passing lanes, block shots and more. All the Nets need him to do is play defense and pass the ball to either Kyrie or KD. I don't see how that can hurt the Nets.

Bryan Fonseca: F**k no! You're really going to take a guy who had that playoff experience last year and — fresh off a back injury and alleged mental-health issues — just throw him into this series? How does that make sense? Can he help from a basketball standpoint on the floor? Sure. That's why Brooklyn made the trade, isn't it? And maybe the Nets are confident in how they've gotten him ready, his progress, their culture and things of that nature. Cool. But to throw him back in there after a year off, after the conclusion to last season and after all that's unfolded since, I'm not sure what sense this makes. Perhaps he's mentally and physically ready, but it feels like a desperate-times-call-for-desperate-measures move.

Spencer Davies: Despite having the luxury of an All-NBA defender and All-Star-caliber threat in the open floor, it'd be wise for the Brooklyn Nets to ease Ben Simmons back into competition. If that means he plays 10 total minutes in short, separated stints, so be it. He'd likely be tasked with roaming off the ball on defense and trying to create pick-sixes, in addition to containing Jayson Tatum and/or Jaylen Brown directly. There's always an inherent risk with debuting a player who hasn't played with your team in a playoff setting, particularly one where you could be experimenting in a situation that needs to be concrete (pending the series score). Still, there's always room for a playmaking, athletic, rangy weapon in the postseason, no matter how little Simmons is out there. 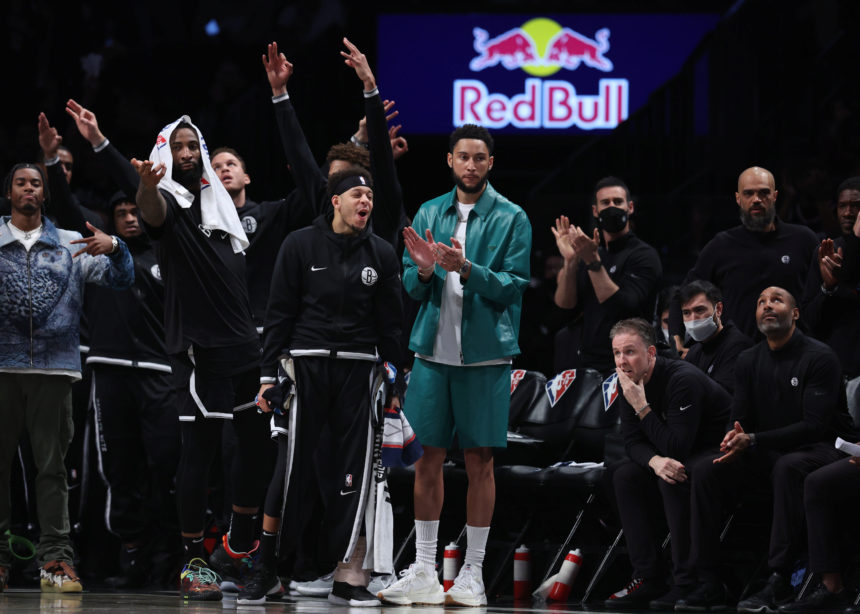 Moke Hamilton: I’m torn on this. I argued that the Nets should shut Simmons down, but I also recognize that Kevin Durant is no spring chicken. He and Kyrie don’t necessarily have all the time in the world to bring a championship to Brooklyn, so you figure Simmons can help while they’re both playing at a high level. Why not, right? At the end of the day, if you’re Sean Marks, you have to trust your medical staff. If I’m Brooklyn, I’d let him run if everyone thought he was good to go. My major concern is that after a one-year layoff, coming back in the playoffs — especially against a team like Boston — is going from zero-to-100 pretty quickly. And let’s keep in mind, medical staffs can be wrong. The Warriors probably didn’t think Durant could do further damage to his “calf strain” by returning against Toronto in the 2019 NBA Finals. Wrong they were, obviously. I’d let Simmons play, but I would slowly ramp him up. I also wouldn’t be expecting him to be as effective as usual. At that point, you’d have to wonder if he’d even be a net-plus over the guy whose minutes he’d be taking (Bruce Brown, in most instances)… But that’s Steve Nash’s problem.

Ethan Fuller: I don't think a mid-playoff-series toss into the teeth of the Celtics' defense is going to get Ben Simmons feeling confident and in rhythm after nearly a year on the sidelines. The Nets have already faced trials of team chemistry with the James Harden trade and Kyrie Irving’s return to full-time play. Now they want to roll out Simmons and further disrupt a rotation that's finding its footing? Simmons is an All-World defender, and maybe that's what the Nets will need if they face elimination. But until then, I just can't logically picture him instantly clicking with the high stakes of the postseason.

Tommy Beer: I understand the hesitancy to introduce a new player into a heavily competitive series when he clearly hasn’t had enough time to practice with his new teammates. However, I think throwing Ben Simmons into the mix is worth the gamble for Brooklyn, primarily because of the significant contributions he can make on the defensive end. Keep in mind, Simmons was named to the All-Defensive First Team for a second consecutive season in 2020-21 and was one of just two unanimous selections (along with Rudy Gobert). The Nets will need quality defenders if they hope to slow down a Celtics squad featuring Jayson Tatum and Jaylen Brown. Also, Simmons brings incredible versatility to the table. He is one of the very few players in the league capable of covering quick point guards (like Marcus Smart) as well as burly power forwards (like Al Horford). While the downside is obvious (expect Boston to send Simmons to the free-throw line early and often), the pros outweigh the cons for Brooklyn.

Jesse Blancarte: I am guessing that most people think the Brooklyn Nets should not play Ben Simmons this postseason. I understand the arguments. He has not played in a long time. He has struggled mightily in past postseasons. His shooting is a problem. He is playing on a new team and will have to try and fit into their offensive and defensive systems on the fly. He could become a distraction if he clams up and the collective focus turns to his struggles like it did in Philadelphia. I still think the Nets should integrate Simmons immediately if he is healthy. Assuming Simmons is healthy, he is one of the most versatile defenders in the league. He has the length, mobility and strength to defend guards and forwards and can jump passing lanes to create easy fastbreak opportunities. Integrating him on offense will be more complicated, but a progressive ramp-up could pay off down the road, assuming the Nets can advance past the Boston Celtics (which is not a certainty at this point). If he doesn’t look healthy, or if he is struggling, then bench him or scale back his minutes. But considering his skillset, his playmaking ability and the fact that he has Kevin Durant and Kyrie Irving to distribute the ball to, I think there is too much upside to not give him a chance. Without him, the Nets are viable contenders, but if Simmons is activated and plays well, the Nets could become the favorite to win it all.

Justin Lewis: The Nets clearly need a body to throw at Jayson Tatum and another playmaker to take some pressure off of Kyrie and KD. They don't need Simmons to score a single point. His defensive prowess and ability to start a fastbreak and make plays for his teammates are valuable enough to throw him out there despite the rust.

Drew Maresca: Simmons is a risky play at best. Back injuries are fickle, and proceeding without sufficient time to gauge how well he responds to contact is dangerous. Simmons may have caught a break in that he avoided surgery. Why tempt fate? If his back is re-injured in any way, surgery is all but guaranteed, and that would result in additional complications. As much as Brooklyn and its fans are dying to push their chips to the center of the table, I'd proceed with caution.

Matt John: There are just so many unknowns surrounding what Ben Simmons could do for the Nets. He hasn't played all season and he's playing for a new team that will put him in a different role from what he was accustomed to in Philadelphia. Simmons could be a game-changer for Brooklyn, but that remains in the abstract until further notice. He's a great passer, but he's not going to have the ball too much playing next to Kevin Durant and Kyrie Irving. He's a great defender, but there's only so much ground he can cover for a sub-par defensive team like the Nets. Right now, Brooklyn's problem is that they need guys who can help them on both ends of the floor outside of KD and Kyrie. Defensively, Simmons helps them immensely. Offensively, he may pose spacing problems. On paper, Simmons should help slow down Jayson Tatum, but since he's coming off a back injury, there's no telling if he's physically capable of covering one of the league's best players. If he comes back, he won't be eased in because the Nets will be throwing him to the wolves. If he thinks he's ready, he'll have to prove it right away.