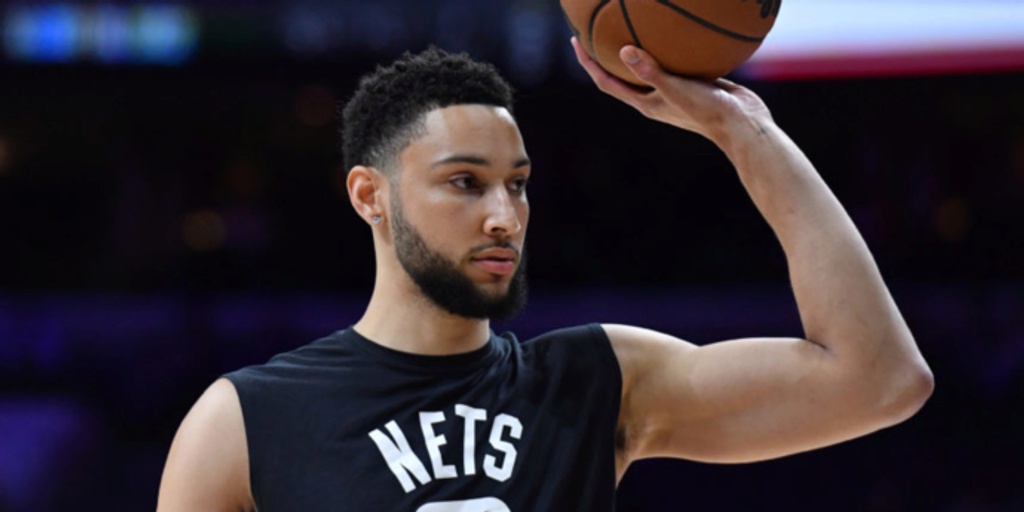 At some point, Nets may be wise to rule Ben Simmons out for season

All things considered, the Brooklyn Nets should consider themselves fortunate to have gotten a player of Ben Simmons’ caliber in exchange for James Harden.

And you know what? That will be just as true next season as it is today.

At some point, Brooklyn may need to do the responsible and sensible thing and rule the young point guard out for the remainder of the season, for the good of the team and for Simmons himself.

Since his arrival in Brooklyn, the Nets have been cryptic in the information they’ve provided on Simmons' availability, or lack thereof. He’s gone from being expected to suit up almost immediately after to trade to being available “at some point this season.”

When asked about him on Tuesday, Nets head coach Steve Nash would only offer that there has been no improvement in Simmons' condition and that he’s no closer to returning than he was last week. He also hasn’t had another MRI, which can be good or bad, depending on your perspective.

Either way, at 25 years old, Simmons has an entire career ahead of him, so the idea that the Nets would somehow lose face on the Harden trade if Simmons is unable to play this season is absurd. Brooklyn was able to rid themselves of a disgrunted superstar who could have walked for nothing and got an All-Star caliber 25-year-old in return. The trade was a windfall, even without considering Seth Curry and Andre Drummond.

Knowing that there's a bigger picture (and a future) in Brooklyn, the Nets at some point will need to be responsible and simply rule Simmons out. Even if Nash still wanted to work him into the lineup ahead of the postseason, the grace period during which a coach would have been able to incorporate a new player has all but run out on Brooklyn.

More importantly, though, is that if Simmons is still nowhere near returning to the court, his back injury is probably more serious than originally thought. Rushing him back to make a run this postseason would be shortsighted.

Dwight Howard, Larry Johnson and Larry Bird all had back issues, and their careers were undercut as a result. Plenty of players — including Michael Porter Jr. — know they aren’t anything to play with. And in Steve Nash’s locker room, best believe, the clarity on Simmons' fate this season would probably go a long way. Of all the colors, gray is the least favorite of any NBA player.

As a class, our heroes thrive on routine, habit and known expectations. Players like to know how many minutes they’ll play, what their roles will be, what is expected of them and who they can count on to be beside them. The lack of clarity with Kyrie Irving, it is believed, had a lot to do with Harden’s unhappiness in Brooklyn in the first place. Ironically, now that Irving is available to the team on a full-time basis, the question mark that Nash and his coaching staff had to operate around — Irving — has now been replaced by another in Simmons.

For comparison's sake, the Golden State Warriors took the bull by the horns and ruled James Wiseman out for the remainder of the season so he can rehab his torn meniscus. The Warriors understand that his future is too important to risk rushing him back, so they're giving him every opportunity to get himself right and his teammates will likely benefit from the clarity it provides.

Brooklyn should be so wise.

Entering play on March 30, the Nets have just six games remaining in the regular season, and there’s quite a bit at stake. They can realistically finish anywhere from seventh to 10th in the Eastern Conference. The same will be true for the Toronto Raptors, Cleveland Cavaliers, Charlotte Hornets and Atlanta Hawks.

It’s all but guaranteed that Brooklyn will find themselves in the play-in tournament, though their seed and opponent are obviously still to be determined. Without Simmons suiting up to play at least four or five regular-season games, the risk of putting him out there in a do-or-die scenario could be too great for Nash to co-sign. A play-in game also doesn’t seem like the ideal scenario to deploy a player who will need to acclimate himself to new surroundings. The same can be said of a first-round playoff series in which the Nets know they would be facing even stiffer competition should they advance.

Ideally, when a new key player is introduced to a lineup, a coach will give himself a 15-to-20 game grace period to figure out rotations, allow the troops to build chemistry and truly get a grasp on what it is they like to run. In the case of Simmons, incorporating him will be more difficult than a player like Seth Curry because Simmons is not a catch-and-shoot scorer. In order for Simmons to thrive, he'll need to have an opportunity to learn Brooklyn’s offense, operate with the ball in his hands and learn his teammates' tendencies. That’s not a process a team with championship aspirations can cheat.

Admittedly, Simmons could serve some utility as merely a finisher at the basket and a defensive presence, even if he's less than 100%. But there’s at least room to wonder whether relegating him to that role would make him a net-positive over the likes of Bruce Brown or Andre Drummond. Brown can shoot, and Drummod provides more credible resistance to the likes of Bam Adebayo, Giannis Antetokounmpo and Joel Embiid.

In the end, Brooklyn is in a bit of a conundrum. On the one hand, they don’t want to rush Simmons back before he’s ready, but on the other hand, the longer he takes to get on the court, the higher the stakes will be for a team that will certainly need a few games to figure things out.

When Simmons arrived in Brooklyn, it was thought to signify the beginning of a new era for the Nets.

In the end, it still can be, even if it means waiting until the 2022-23 season to see it all come together.