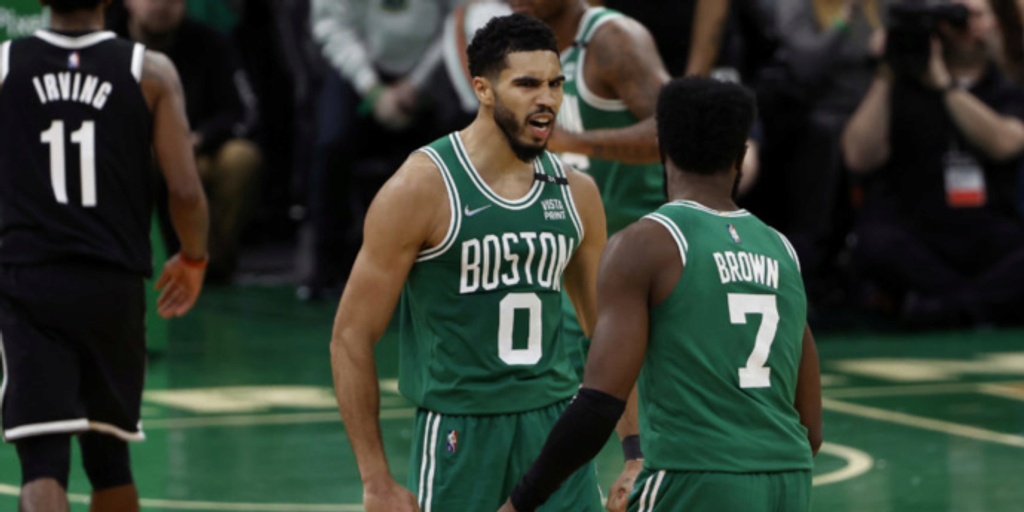 BOSTON (AP) — Jaylen Brown scored 22 points, including 10 in the fourth quarter, and the Boston Celtics rallied from 17 points down to beat the Brooklyn Nets 114-107 on Wednesday night and take a 2-0 lead in their first-round series.

Jayson Tatum added 19 points for the Celtics, who held Kevin Durant without a basket in the second half. Al Horford had 16 points, Daniel Theis scored 15 and Payton Pritchard had eight of his 10 in the final period.

Durant finished with 27 points but struggled from the field for the second straight game, shooting 4 of 17. Kyrie Irving had just 10 points on 4-of-13 shooting a day after being fined $50,000 for directing obscene gestures and profane language at Celtics fans during Game 1.

The series shifts to Brooklyn for Game 3 on Saturday night.

Durant and Irving were a combined 1 for 17 in the second half. Bruce Brown finished with 23 points and Seth Curry added 16.

The TD Garden faithful peppered Irving with boos throughout, beginning with the pregame introductions. The volume ratcheted up after tipoff with the addition of “Kyrie sucks! Kyrie sucks!” chants on each of Brooklyn’s first two possessions. The boos returned whenever he got his hands on the ball.

Boston trailed the entire first half but finally caught up to tie it at 79 on a short jumper by Daniel Theis. The Nets were able to settle in and took a 90-85 edge to the final period.

The Celtics tied it up again at 92 early in the fourth on a leaner by Jaylen Brown and took their first lead of the game with 7:48 left on a jumper by Pritchard.

It was part of 23-4 run that grew the Celtics’ lead to 108-96. The Nets went almost three minutes without a basket during the stretch.

The barrage of boos fans aimed at Irving did little to rattle Brooklyn early. The Nets jumped out to a 9-0 lead, which led to a quick Boston timeout. Bruce Brown had all nine points, part of a 12-point quarter that helped put Brooklyn in front 33-24.

The lead increased to 45-31 in the second, prompting another Celtics timeout. During the break, Marcus Smart, who injured his left thumb minutes earlier while diving on the floor after a loose ball, could be seen grimacing as trainers attended to him on the bench.

He got the thumb taped and remained in the game, scoring six straight points.

Brooklyn settled in and got its lead as high as 15 before a late flurry by Boston helped it trim the deficit to 65-55 at half.

Nets: Irving, who is observing Ramadan, came out of the game with 3:23 left in the first quarter. He went to locker room and returned with food, the sun having just set in Boston. … Curry was called for a flagrant foul in the first after he grabbed Tatum’s arm and knocked him to the ground while breaking up a sure fast-break basket.

Celtics: Had nine turnovers in the first half.

Nets: Ben Simmons went through some contact work with teammates on Wednesday, which coach Steve Nash called “another step” in the point guard’s rehab efforts on his injured back. But Nash said an ESPN report that Simmons could return to action as early as Game 4 was news to him.

Though Udoka cautioned the team still isn’t anticipating him recovering from his recent knee surgery to return in time for this series.