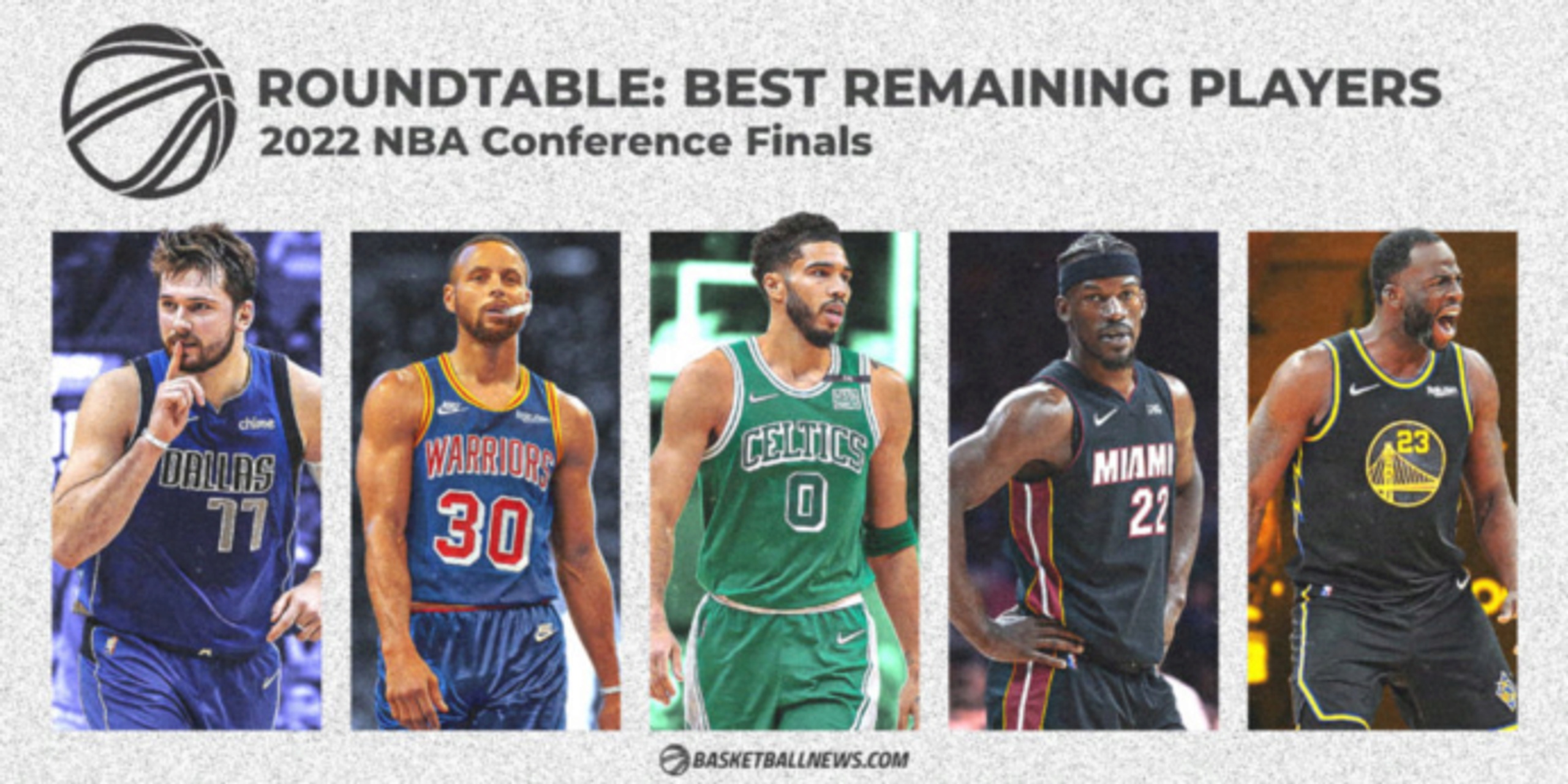 Roundtable: Ranking the 5 best players remaining in the NBA Playoffs

We've reached the Conference Finals, which means that only four teams remain in the NBA Playoffs.

The Eastern Conference's top two teams, the Miami Heat and Boston Celtics, will clash in what's sure to be a physical series, while the Golden State Warriors and Dallas Mavericks are set to square off in a highly-anticipated battle that will feature two incredible offensive talents.

With only those aforementioned franchises remaining, we asked our BasketballNews.com staff:

How would you rank the five best players remaining in the NBA Playoffs?

This is tough, but I think I'll go:

After what Luka has done through two rounds, I feel very confident putting him at No. 1. Curry and Tatum are a toss-up for me; if someone had Tatum at No. 2 and Curry at No. 3, I wouldn't be mad at it. Butler is a two-way force who elevates his game a ton in the postseason, so he's No. 4.

This is where it gets interesting. Adebayo, Jaylen Brown and Draymond Green each have a case, but give me Adebayo because of how well he's played on both ends of the floor so far during the playoffs. I think he's poised for a big series against the Celtics.

1. Jayson Tatum: In five seasons and as many consecutive playoff appearances, this man has played the elite of the elite at 19 years ol... okay, that joke will never get old, but in all honesty, we’ve got to admit that the total package is consistently there for Tatum. He is in a place where he’s just making his teammates better night-in and night-out. He’s gone up against greats like LeBron James, Kevin Durant and Giannis Antetokounmpo, and has not flinched, matching them shot for shot. Because of those experiences and the steady manner in which he’s played this postseason on both sides of the ball, I give Tatum the slight edge over the next guy...

2. Luka Doncic: The first time Luka doesn’t draw the Los Angeles Clippers in the postseason, he gets to the Western Conference Finals, eh? Without the prisoner-of-the-moment thing, it speaks volumes about how Luka’s just had that big-game mentality since he was overseas. He’s just a little bigger and stronger now. Same confidence and everything; he has not changed his energy one iota. His offensive impact is so substantial that the defensive woes are cast aside. If he can figure out how to defend a lick, it won’t be long before he tops this particular list.

3. Steph Curry: Don’t let one off-series and a “down” shooting season blind you from the fact that Steph is Steph. He’s constantly in motion, always making defenders stay attached to him, which in turn makes life easier for his teammates. Then, there’s the way he always closes games and goes into that mode where he could shoot from the front row on the opposite side of the floor and it wouldn’t touch iron. Until there’s any sign of regression, I don’t bet against Steph.

4. Jimmy Butler: I hate rankings because four seems so cruel. Butler’s been a stone-cold killer in the playoffs except for last postseason. I’ll refer you to Bryan Fonseca’s article about that specific stretch. Otherwise, Jimmy’s one of those guys who will rip your heart out in attack mode. He’s damn gritty, plays the right way and leads by example — late-season war of words be damned.

5. Bam Adebayo: Five is probably the spot most up for debate. It’s all love for Draymond Green, Jaylen Brown and Klay Thompson. But with Adebayo, he is a load to handle athletically on either end, presents all kinds of matchup problems and can impact the game in a multitude of ways, as ambigouous as that sounds. (Green’s probably my runner-up here because of the way Golden State ticks when he’s on the floor).

This is definitely a challenge.

1. Steph Curry: Even after a second-round slump, I still would take a red-hot Curry game over any other player remaining.

2. Jayson Tatum: Tatum gets the edge over Luka Doncic by gapping him on the defensive end.

1. Luka Doncic: He's the best player left standing despite the fact that his team is the weakest. Maybe the Dallas Mavericks are a better version of the 2006-07 Cleveland Cavaliers and he's *that* LeBron James. Let's remember that Doncic was All-Tournament at EuroBasket at age-18, which Slovenia won for the first time ever. He also is responsible for leading Slovenia into the Olympics for the first time ever this past summer, where they nearly medaled. They jumped from barely top-20 to firmly top-five in the world. That man can lift a team like few others.

2. Steph Curry: He's still the best shooter in the world and still one of the best players in the league. He hasn't been as good as a couple others we're about to get to, but is still *that dude* more often than not. The Warriors are the title favorites now, and it starts with The Chef.

3. Jimmy Butler: He is the most underrated star in the NBA, and historically — outside of last season — is better in the playoffs going back to his days as a Chicago Bull. He was primarily responsible for the only non-Kevin Garnett-led Minnesota Timberwolves playoff berth until this season. Every team he left got worse, and every team he joined got better.

4. Jayson Tatum: After Luka, he's the man most knocking on the door of "next" left in the playoffs. The best four talents of these playoffs have been, up to now, Luka, Giannis, Butler and Tatum.

5. Bam Adebayo: This is with massive respect to Jaylen Brown. Bam is not only the best defender left in the playoffs but the most consistent. For all the talk about lack of aggression, he averages nearly 20 and 10 offensively as a third option. Yes, he's capable of more offensively than he's shown in the playoffs, but he typically does well against the Celtics. Expect more in the Eastern Conference Finals.

1. Luka Doncic: He just eviscerated a 64-win team coming off a NBA Finals appearance in the most pivotal game of the season against multiple stingy wing defenders, including the Defensive Player of the Year runner-up. He played like he knew it too. He is the best player left in these playoffs until proven otherwise.

2. Steph Curry: He's the deadliest man from three in a league that values threes now more than ever. Now that his foot injury is firmly behind him, the Warriors will go as far as his deadly three-point accuracy will take them. Fun fact: This is Steph's first Western Conference Finals berth sans Kevin Durant in six years.

3. Jayson Tatum: He just went toe-to-toe with the most unstoppable player in the league and reigning champion, and came up victorious. Not only that, but he put the Celtics on his back when they were down for the count. The talent was always there. The growth in mental fortitude is what's eye-opening.

4. Jimmy Butler: What he doesn't have in talent compared to the other three he makes up for in grit. If there's one player in the league who's willing to get his hands dirty to get the win, it's Butler. All things considered, he provided a substantial return on investment for Miami, as this is their second Eastern Conference Finals berth in three years with him.

5. Bam Adebayo: The DPOY candidate has kept it going in these playoffs, having stopped the talented (albeit badly injured) Joel Embiid. Adebayo is the quintessential modern big in this league. He may not fill up the stat sheet like most stars do, but he makes up for it by winning games. 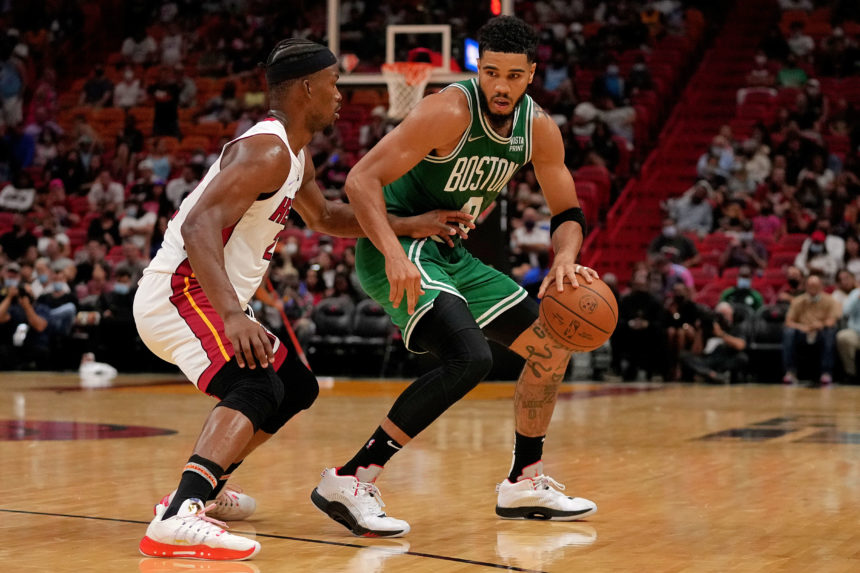 1. Luka Doncic: After what I just witnessed Luka do in-person against the Phoenix Suns, it felt like a transformative career moment. Doncic is a bona fide superstar now, and the way he's carried Dallas to this point is nothing short of incredible. The Mavericks’ hopes and dreams hinge upon Doncic continuing to be the best postseason player.

2. Steph Curry: After waffling back-and-forth on No. 2, I settle on Curry because doubting him feels unwise. Curry still provides vintage scoring performances as he continues to be the lifeblood of the Warriors’ offense. Curry versus Doncic is a matchup I can't wait to watch. Hopefully, it's a long a long series.

3. Jayson Tatum: After going toe-to-toe with two-time MVP Giannis Antetokounmpo, Jayson Tatum more than held his own. Delivering a legendary Game 6 performance in Milwaukee, Tatum has propelled himself to superstar status like Doncic. If anything, the NBA conference finals showcase that the next generation of stars are taking the batons and running away for good.

4. Jimmy Butler: Don’t doubt Jimmy Buckets, especially on this stage. Butler delivered against the Sixers, and I expect him to put on a show versus Boston. Butler’s all-around game continues to shine on the postseason stage.

5. Klay Thompson: Playoff Klay is very, very real. The West Finals feel like the ideal breakout stage for Thompson post-injury. Klay is beginning to heat up each round, too. Vintage Klay showing up on that platform would be so fun to watch.

1. Luka Doncic: He's carried one of the lesser total rosters in the playoffs to the Conference Finals. He's generational.

2. Jayson Tatum: He could be considered "1A" because of his two-way play, but Tatum has been a problem for two months now.

3. Jimmy Butler: JB is that dude. He can carry the Heat to the Finals, but Tatum and Luka get the nod as guys who can carry their respective teams through the Finals.

4. Steph Curry: He's not been the same Steph, but the Warriors are still in the West Finals — and that's terrifying. If he returns to form, the Warriors may win another championship.

5. Jaylen Brown: He's the best No. 2 of any team left in the playoffs. His two-way prowess and ability to pick it up when Tatum is off is crucial for the Celtics.

Steph is the greatest shooter ever, and Luka is that dude. JB is a dawg, and I will always ride with him. Tatum's star power is rising, and Klay is still deadly even after his two-year absence.

This is a tough question!

The four best players left are for sure Steph, Luka, Tatum and Jimmy. I would have to go with Bam at No. 5, so there's a decent little drop-off from the top four. (Not a slight! There's just levels to this, like Meek said).