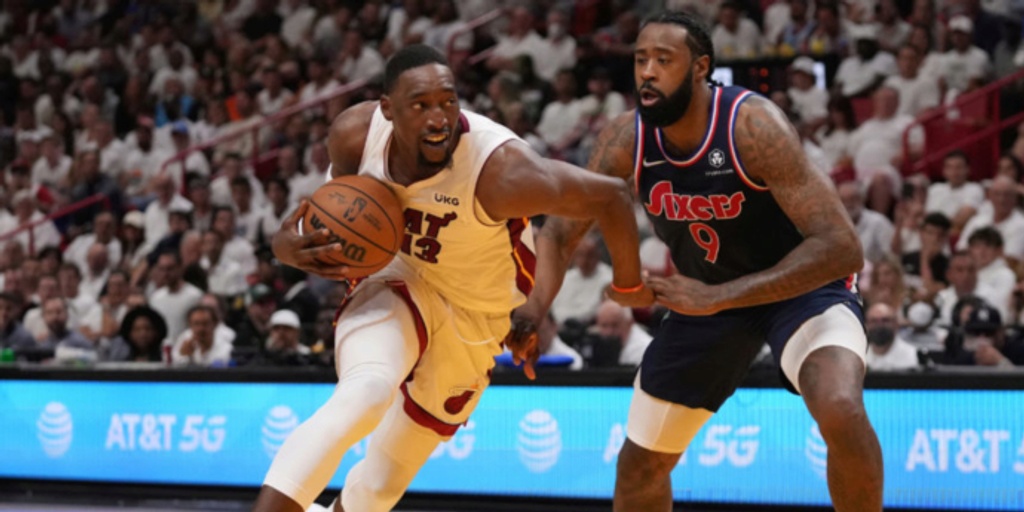 During the Miami Heat’s first-round dispatching of the Atlanta Hawks, Bam Adebayo showcased precisely why he finished among the top-five in Defensive Player of the Year voting this year. His perimeter mobility, length and wide-ranging ground coverage walled off drives for Trae Young and rendered a top-three regular-season offense untenable.

In three of those contests though, Adebayo took nine or fewer shots, including two games with a combined 11 shots and 15 points. Miami didn’t encounter much trouble coasting past Atlanta, but Adebayo surely wasn’t casting his holistic All-Star-caliber imprint upon the series.

Against the Philadelphia 76ers, Adebayo has been the series’ best player en route to a pair of blowout victories. Through two games, the 24-year-old is tallying 23.5 points, 10.5 rebounds, 3.5 assists and 1.5 steals on 80% True Shooting. He’s averaging 10.5 shots and 9.5 free throws, notable leaps from the 8.4 shots and 4.4 free throws he averaged during Round 1.

With Joel Embiid sidelined, the Sixers’ other options at center — DeAndre Jordan, Paul Reed, Millsap and Tobias Harris — are ill-equipped to contain Adebayo offensively. Some are too slow to track him (Jordan, Millsap). Others are too small (Millsap, Harris). Another is too inexperienced as he garners his first extended trial of playoff basketball (Reed).

Jordan’s idle nature as a drop defender exposes him in pick-and-rolls. Harris lacks the length to alter the Heat center’s finishes. Reed, prone to overzealous tendencies, has fallen for quite a few pump-fakes and has sent Adebayo to the foul line. Together, they’ve all proven incapable of neutralizing or slowing his interior scoring prowess.

His timing and discretion as a roller have been crucial too. He routinely picks the optimal angle or path from which to begin his dives and sets hulking screens. Butler, Herro, Gabe Vincent and Max Strus have all been recipients of his excellent screening, and his keen understanding of when to migrate toward the rim eases the burden for ball-handlers.

With seven screen assists through two second-round duels (per NBA.com), only Deandre Ayton (10), Giannis Antetokounmpo (10) and Dwight Powell (8) have more. Scoff at that statistic to your heart’s desire, but there’s a degree of utility in it. Adebayo’s screening is integral to the prosperity of Miami’s half-court offense, which is not flooded with standstill creators and requires him to aid perimeter scorers in their quest for space.

He’s also snagged six offensive boards in two games while also occupying the attention of defenders to spring free teammates to gobble up second chances instead. Not only is Adebayo excelling in the glamor category of scoring, he’s checking the boxes of grunge-work like screening and rebounding.

The Sixers likely want nothing to do with him the rest of the series. While they can’t control how he imposes himself offensively, they’ve quickly made evident their intention to avoid him defensively.

Among the sporadic instances in which he’s directly involved in a possession, the way he vibrantly and aggressively embraces switches has flustered Philadelphia. He’s erased driving angles numerous times and omnisciently roamed in help. Tyrese Maxey has struggled to attack downhill against him (though Maxey, with 34 points, was stellar in Game 2). Adebayo consistently obstructs assignments from turning the corner against him.

The All-Star’s brightest defensive superlative in this series has been his deterrence. Philadelphia’s clear preference is to exclude him from the action altogether. According to NBA.com, he’s been a primary defender for ~184 possessions, and those players have only attempted 17 shots against him. As a team, the Sixers have scored 155 points, good for 84.2 points per 100 possessions.

Most often, when Adebayo switches onto someone, they hardly even look to create and remain far removed from any threatening scoring position. As such, he can retreat to a free safety role, complicating passing windows and disincentivizing driving lanes.

Whether it’s Jordan, Reed, Millsap or Matisse Thybulle, Philadelphia is playing someone (or multiple someones) that Miami feels comfortable disregarding to suppress whatever Maxey, Harris or James Harden are looking to do. Adebayo is the man often tasked as a helper to further suppress those efforts.

During Adebayo’s 67 minutes in this series, the Heat have outscored the Sixers, 166-125. During his 29 minutes on the pine, Philadelphia has outscored Miami, 70-59. He’s the biggest (available) differentiator between a competitive pair of games and two double-digit wins for Miami.

Embiid’s unfortunate absence pervades across various angles of this matchup. But it’s perhaps been most pronounced in Adebayo’s play, given the multifaceted manner in which he’s overwhelming the Sixers. Until or if the big fella returns, these problems will likely persist for Philadelphia and continue to behoove Miami.

With Adebayo at the heart of everything, the Heat are in control, two wins away from their second conference finals appearance in three seasons.