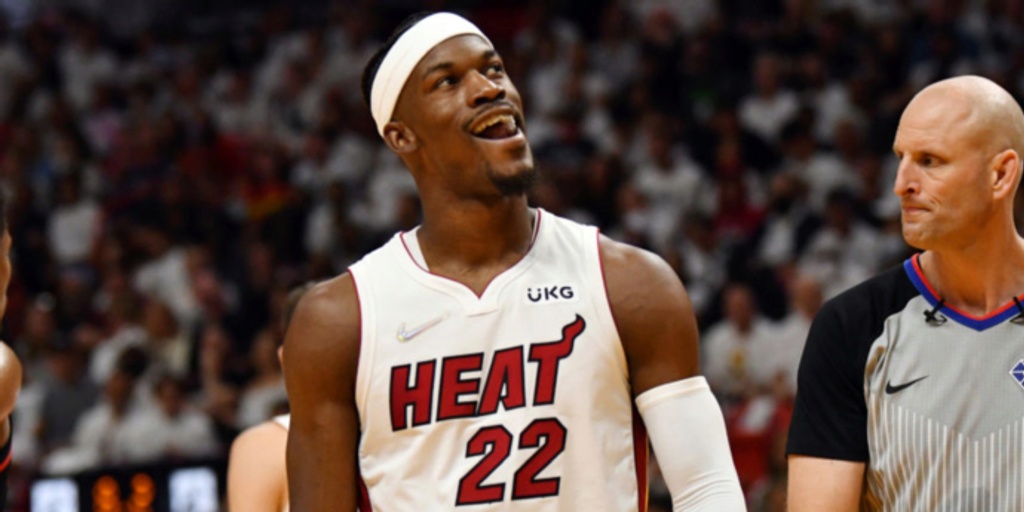 Jimmy Butler is a 16-game player

Four years ago, after winning a third title in four seasons, Draymond Green offered the Golden State Warriors' front office some advice before the 2018 NBA Draft, which included a directive to target “16-game players.”

Larry Harris said Draymond Green's given the front office a piece of advice: "There are 82-game players, then there are 16-game players." Draymond's interested in the 16-game (playoff-type) players.

And although people are sparring daily with FOX Sports personality Nick Wright over his thoughts on Nikola Jokić and LeBron James among others, he drew the Green claim as a reaction to Jimmy Butler’s epic 45-point game performance Tuesday night in a 115-105 Game 2 victory over the Atlanta Hawks.

If you polled a consensus of NBA Twitter, media, players or front-office people about whether Trae Young is the best player in this series, an educated guess would suggest that those largely outside of Miami (and New York) would vote “Yes.”

Some people very flippantly said Trae Young was *easily* the best player in the series. And, yo, I get it ...

What Jimmy Butler does on *both* ends isn't flashy, doesn't make highlights, but that dude is a flat-out winner and a star, and he proved it yet again tonight.

And that’s understandable, right? Young is a superstar offensive talent who projects to be a perennial All-Star and an All-NBA challenger, if healthy, for much of his prime. But also in doing so, perhaps it ignores what could be brought on the other end of the floor by Butler, who is at least a candidate to make an All-Defensive Team for a sixth time in nine seasons.

(I affectionately refer to Butler as the Ed Reed of the NBA because of his elite ability at playing free safety. His running mate Bam Adebayo is Darrelle Revis, for what it’s worth.)

Whether you prefer an offensive-production machine who routinely offers the league’s most tantalizing highlights, or a two-way grinder with the grit of Stone Cold Steve Austin and immense impact that often goes overlooked as a result in a world of flashier, Rey Mysterio-types, whoever you think the actual best player in the series probably doesn’t matter.

What matters is this: It bears reminding that Butler is a 16-game player. He’s damn good in the regular season too, but time and time again, he’s proven it in the playoffs, and it needs to be noticed.

(Before the NBA Twitter mob comes, this is not to say Young necessarily isn’t, especially after last year’s postseason run. We’re just turning our focus to Butler now for the purposes of this piece).

In Game 2, Butler finished with 45 points, 5 rebounds, 5 assists and a pair of steals, He subtly patrolled the Heat’s defensive secondary, manipulating Atlanta's guards to lob seemingly-out-of-range alley-oops that were detected and slapped toward a Miami teammate to initiate a break. In addition, the 32-year-old star bullied his way to the free-throw line to tilt the power in his team’s favor.

Still, this was a different type of contest-controlling outburst than one we’re accustomed to seeing from the Tomball, Texas native.

A new playoff career-high for @JimmyButler puts the @MiamiHEAT up 2-0!

As the Hawks seemed to get hot from the floor, cutting the Heat lead to 64-62 with 8:59 to go in the third quarter, Butler drilled his third three of the game two possessions later. One minute after, he extended the lead to double figures with a lay-up following a defensive board, which prompted a Nate McMillan timeout. The Hawks would again come within single digits following 6-0 run late in the third, and Max Strus found Butler for a dunk with 1:48 to go in the period.

In the fourth, Butler produced 9 points, 2 assists and a steal, and he found Gabe Vincent (who himself had a fantastic two-way effort off the bench) for a triple with 6:12 left in the game; it was a key moment to stretch a narrowing four-point lead to seven.

As the Hawks again sliced it down again with 3:53 left, Butler came out of a timeout, penetrated the lane, drew in the defense and found an open Adebayo for a dunk — his easiest bucket of the playoffs so far. Not going away, the Hawks cut it to three, but Jimmy drove into a slam with 2:16 left to bring Miami's lead back up to five. And on the ensuing offensive possession, Butler drained a fourth three to make it 109-101 Heat with 1:36 remaining in the game, essentially the dagger.

We know about what Butler did in the 2020 NBA Playoffs and those Finals in particular. And in 2019, if it wasn’t for his performance in the seven-game East semifinals series against the Toronto Raptors, there’s no telling how long that Philadelphia 76ers team would’ve lasted.

That summer, Simmons and Harris were maxed, and Butler landed in Miami.

(And if you’d like to hold up the 2021 playoffs to detract Butler, you can. But, you must also note that the Heat and Los Angeles Lakers had a seven-week offseason between the NBA Finals and training camp, and the Boston Celtics and Denver Nuggets had nine each; they all flamed out last spring for a reason.)

Tuesday night's performance capped an imperfect offensive display from Miami, who settled for too many jump shots in favor of attacking the rim with Bogdan Bogdanović, DeAndre Hunter and Kevin Huerter all being in foul trouble throughout, but every playoff game is its own experience.

As the Heat head into Atlanta with a 2-0 lead, Adebayo and Tyler Herro — who’ve combined for 36 points through the first two games — have yet to leave their offensive imprint on the series. If you throw in Kyle Lowry in the mix, the number only grows to 55 points.

If at least one guy is able to have a breakthrough on the road, Miami will probably not need another 45-pointer from Butler, so long as the team defends to or near its capabilities.

And if that doesn't happen, one, it'd be a surprise, but two, who else is better suited to grind you to an ugly-but-effective-ass 81-77 road victory?