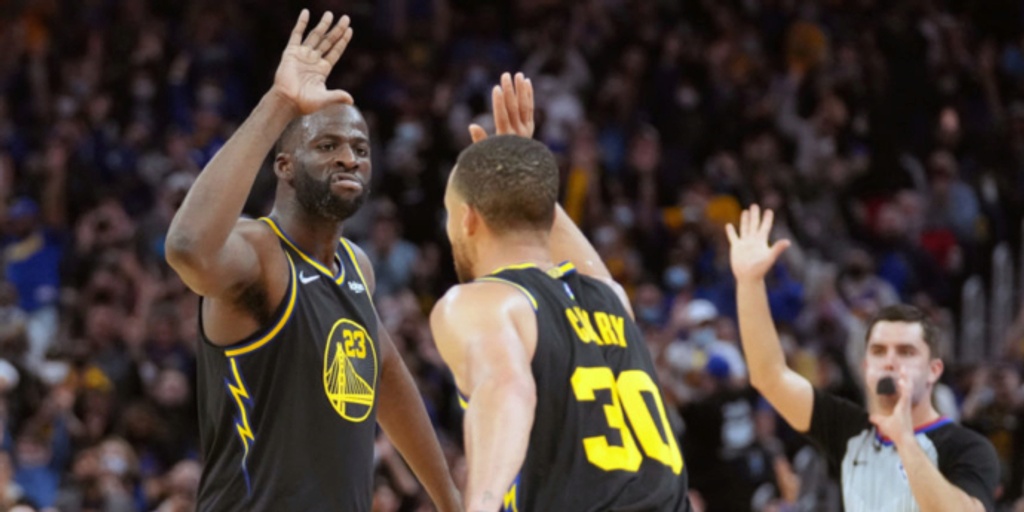 The Milwaukee Bucks, now finally healthy, have vaulted further in the top-five, while the league's top two teams are set to square off in a much-anticipated duel, with potential historical implications, Tuesday night in Phoenix.

Today in "further proof that Stephen Curry is the greatest shooter that has ever walked the earth," over his last 10 games, Steph is averaging 31.8 points, 7.4 assists, 5.1 rebounds and 6.2 made three-pointers while shooting 50.7% from the floor, 46.6% from downtown and 91.7% from the charity stripe. Oh, and as if they needed it, the Warriors have reinforcements on the way. Both Klay Thompson (right Achilles surgery) and James Wiseman (right knee surgery) were assigned to the team's G League affiliate in Santa Cruz earlier this week, as they inch closer to a return to action.

The Suns have a chance to notch their 17th consecutive victory Tuesday night, which would tie the franchise's all-time record. But they'll have to earn it, as they take on the Warriors in a showdown that will generate plenty of juice for a regular-season game played in November. It will be the first game in history in which both teams playing each other have a winning percentage of at least .850, and both teams are riding winning streaks of at least seven games.

The Nets got some bad news Monday when it was announced that sharpshooting guard Joe Harris would undergo surgery on his left ankle. Harris' agent said the guard is expected to miss 4-to-8 weeks, but ESPN's Adrian Wojnarowski reported that "there's optimism that Harris can return to the Nets on the shorter end of that timeline."

The Bucks have now won seven straight, and are still undefeated this season (a perfect 10-0) when Giannis Antetokounmpo, Khris Middleton and Jrue Holiday are all in the lineup. The Bucks have also added veteran big man DeMarcus Cousins, who will be available to play this week. "When you look at the depth chart and look at how we're subbing, depth at the big position is something that we could use," Budenholzer said over the weekend. Starting center Brook Lopez (back) has been sidelined since opening night.

Nikola Vucevic did it all in the Bulls' victory over the Charlotte Hornets on Monday night, tallying 30 points, 14 rebounds, 5 assists and 2 blocks. Alex Caruso also had another solid game, and has been a terrific addition for Chicago. Over his last five games, Caruso, who leads the NBA in steals, is averaging 13.5 points, 3.8 rebounds and 4.5 assists while shooting 53.8% from the floor.

The Jazz have won 6 of their last 8 games, thanks largely to consistent excellence from Rudy Gobert. On the season, Rudy is averaging 15.1 points, 14.5 rebounds and 2.1 blocks, while converting over 73% of his field-goal attempts.

After losing to the Nuggets on Monday night in Miami, the Heat are 2-3 in their last five games, with one of those wins coming against the lowly Detroit Pistons. Miami will look to get back on track Wednesday night when the team hosts the Cavs before heading to Indiana on Friday.

After averaging 30.5 points per game in 2019-20 and 31.3 points in 2020-21, Bradley Beal has scored more than 30 points in a game just once this entire season. Over the Wizards' last six games, Beal is averaging 21.0 points per game. However, the Wiz are five games over .500 and sitting in fourth place in the conference.

Remarkably, LaMelo Ball has dished out 13 assists in each of the Hornets past three games. According to Basketball-Reference, only four other players in NBA history have tallied at least 13 assists with double-digit points and over five rebounds in more than three consecutive games. Those four players are Magic Johnson, Wilt Chamberlain, Russell Westbrook and Oscar Roberston.

The Sixers were just 2-8 over their previous 10 games heading into Monday night when they secured a much-needed victory over Orlando. To make things even better, Joel Embiid has returned to action after missing over 20 days of action. Tyrese Maxey continues to impress on a nightly basis, making a solid case for the Most Improved Player award while buying time for the Sixers front office to patiently deal with the Ben Simmons saga. Over Philly's last 10 games, Maxey is averaging 22.1 points, 5.4 assists and 3.9 rebounds.

Luka Doncic missed all four free throws he attempted in Monday night's loss to the Cavs. Dating back to Nov. 3, Doncic is shooting just 59% from the charity stripe, and is at 65.2% for the season. It's befuddling considering Doncic's accuracy from long range, and that over the first two months of the 2020-21 season, Doncic was 178-for-224 (80%) from the free-throw line. In addition, Doncic's on/off splits this season are stunning. The Mavs have been outscored by 110 points with Doncic on the floor this season. The only player in the NBA on a winning team with a worse plus/minus is Kemba Walker (-122).

The Clippers' seven-game winning streak earlier this month seems like a distant memory, as L.A. has since dropped 5 of its last 7 contests. The Clips' defense had been solid all season, but they shockingly gave up 123 points to the undermanned Pelicans on Monday night.

The Nuggets were happy to welcome MVP Nikola Jokic back to the lineup on Monday after he missed four straight due to a wrist injury. However, Denver fans got some devastating news earlier in the day, when Adrian Wojnarowski of ESPN reported that Michael Porter Jr. will undergo a surgical procedure on his back and will miss an indefinite period of time.

The Celtics are about to endure a brutal three-week stretch. Boston hosts the Sixers on Wednesday before embarking on a five-game road trip against Utah, Portland, both LA teams and the Suns. Then, the C's return home to take on the Bucks, Warriors, Knicks and Sixers. Ten consecutive contests against teams at or above .500. Yikes.

There was some very surprising news courtesy from Knicks coach Tom Thibodeau on Monday, as he told reporters that not only was Alec Burks going to replace Kemba Walker in the starting lineup, but that Walker would be out of the rotation entirely — at least for the immediate future. It was surely a difficult decision for the coach to bench the veteran, but it was the right call. The Knicks have been outscored by a mind-boggling 122 points in the 441 minutes Walker has played this season.

The Lakers are 4-5 over their last nine games, which is concerning enough. But that record is even more troubling when you realize all four of those wins have come against teams far below .500. Conversely, Los Angeles is 0-4 in its last four games against teams with winning records.

The Hawks had reeled off seven straight victories before the Knicks beat them in Atlanta over the weekend. The NBA announced on Monday that Trae Young was named Eastern Conference Player of the Week for his performance last week. Young averaged 31.3 points and 8.5 assists as the Hawks went 3-1 over four contests.

Lauri Markkanen has been a beast for the Cavs since returning to the lineup after missing nearly three weeks due to COVID. In the four games he's played since rejoining the team, Lauri Legend is averaging 20.0 points, 8.0 rebounds and 3.5 made treys while shooting 50% from the floor, including 42.4% from behind the arc.

Where would you rank the Anthony Edwards/Karl-Anthony Towns duo amongst the rest in the league. #NBATwitter #RaisedByWolves pic.twitter.com/1VjhsN1SNc

The Wolves are rolling right now, and are winners in 7 of their past 8 games. During this eight-game stretch, sophomore Anthony Edwards is averaging 20.5 points, 6.4 rebounds, 3.8 assists, 1.9 steals and 3.1 made triples. At just 20 years of age, the kid is starting to establish himself as a star already.

The entire city of Memphis held its collective breath when it saw superstar point guard Ja Morant crumble to the court in pain on Friday night, clutching his knee. However, Grizz fans got good news over the weekend, as coach Taylor Jenkins said Morant is only dealing with a left knee sprain. "He'll be out for a few weeks, and each week, we'll have a better idea as (things) unfold," Jenkins said Sunday. "We expect a full recovery, and this is nothing long-term that we're worried about."

The Blazers have lost three in a row, and Damian Lillard is mired in another shooting slump. During these three straight defeats, Lillard is shooting just 35.6% from the floor and 26.1% from downtown. Dame has never finished a season shooting below 34% from deep, but has converted just 30.2% of his triple tries in 2021-22. Lillard is expected to take a rest day on Tuesday vs. Detroit.

The Raptors have played without OG Anunoby (left hip) and Khem Birch (right knee) in each of their past six games, and are just 2-6 in their last eight. Fortunately for Toronto, the team has an excellent opportunity to jumpstart its season over the next few weeks, as they play 9 of their next 10 contests at home.

The Pacers lost to the Wolves on Monday, but the defeat can't be pinned on Domantas Sabonis, who was everywhere for the Pacers. He racked up a monstrous triple-double: 16 points, a career-high 25 rebounds and 10 assists. According to Basketball-Reference, Sabonis is the first player to grab 25 boards in a triple-double effort since Shaquille O'Neal in 1993.

The Kings won back-to-back games last week, including a thrilling triple-overtime victory over the Lakers on Friday before getting blown out in Memphis in Sunday night. As we noted last Tuesday, Marvin Bagley III has worked his way back into the Kings rotation. Over Sacramento's past three games, he's averaging 9.3 points and 6.3 boards in 24.1 minutes while shooting 71.4% from the floor.

Break up the Spurs! They've won consecutive contests! For a Gregg Popovich-coached team, that is usually a meaningless accomplishment. However, by beating the Celtics last Friday and the Wizards on Monday night, San Antonio has a winning streak for the first time this season. According to the Associated Press, San Antonio has won back-to-back games 881 times under coach Pop since 1996, which is the most of any coach in NBA history. (Phil Jackson is second with 823.)

OKC lost to the Rockets on Monday nightm but did get an encouraging performance from its young big man, Isaiah Roby, who tallied a season-high 17 points in 27 minutes. Tre Mann also notched his career-high with 17 points vs. Houston.

Jonas Valanciunas erupted for a career-high 39 points along with 15 rebounds in Monday's victory over the Clippers. Valanciunas was a perfect 7-for-7 from downtown in the first half. Shockingly, Valanciunas now leads the NBA in three-point percentage this season, as he has knocked down 30 of his 58 attempts (51.7%).

The Rockets young guns propelled them to a victory over OKC on Monday, which was Houston's third consecutive victory. Christian Wood poured in 24 points and grabbed a career-high 21 rebounds, while Kevin Porter Jr. notched the first triple-double of his career with 11 points, 11 assists and 10 rebounds. At 21 years and 209 days old, KPJ became the youngest player in franchise history to record a triple-double.

The Pistons have lost six straight and sophomore Saddiq Bey, the 19th overall pick in the 2020 NBA draft, continues to struggle with his efficiency. Bey has been asked to shoulder more of the offensive load for the rebuilding Pistons this season, but has not been able to locate his stroke. After posting a respectable 53% Effective Field Goal percentage as a rookie, Bey is shooting just 36.3% from the floor, including 29.4% from downtown and 73.2% from the free-throw line this season.

Monday night was a bummer for the Magic. Not only did they lose to the Sixers, but they lost No. 5 overall pick, Jalen Suggs, for an "extended period of time," as he fractured his right thumb. Guards Michael Carter-Williams and Markelle Fultz are both also sidelined with injuries. (Editor's Note: Fultz joined "The Rematch" with Etan Thomas recently to discuss his recovery and more.) Magic head coach Jamahl Mosley said Monday there is no timeline for either player to return. Cole Anthony has missed six straight games due to an ankle injury to boot.