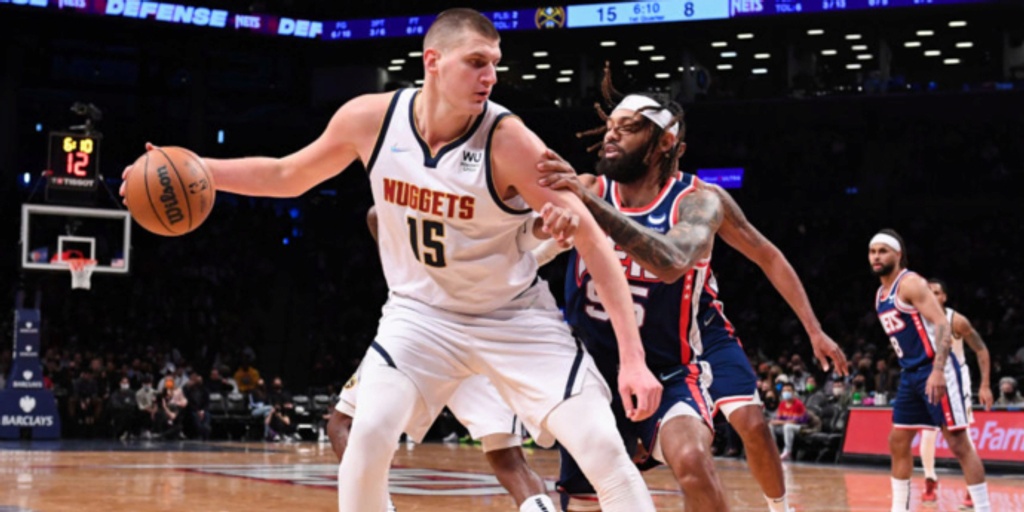 NBA Power Rankings: Nuggets and 76ers on the come up, Nets sliding

The Denver Nuggets are red-hot, thanks primarily to the MVP-caliber play of Nikola Jokic, while the Brooklyn Nets have gone ice-cold, losing 11 of their past 17 games.

With their victory over the San Antonio Spurs on Sunday night, the Suns became the first team in the league to reach the 40-win plateau. In the process, they guaranteed themselves the Western Conference's best record going into the All-Star break, which means head coach Monty Williams will coach the West in Cleveland later this month. And as valuable as soon-to-be All-Stars such as Chris Paul and Devin Booker have been this year, Phoenix has received surprisingly solid contributions from mid-season signing Bismack Biyombo, who is averaging 14.1 points and 10.4 rebounds over the Suns' last seven games. Phoenix is undefeated, a perfect 12-0, in the 12 games Biyombo has appeared in this season.

Steph Curry had been ice cold (at least by his standards) over the first 15 games the Warriors played in January and the first three quarters of Golden State's game vs. the Houston Rockets on Monday night. But in the final frame, Steph played like Steph, scoring 21 points in the fourth quarter to lead the Warriors to their sixth consecutive win. "We've seen Steph do that a million times," head coach Steve Kerr said after the game. "It was bound to happen even though it's been a couple of weeks or whatever. Not surprising, but fun to see him shake free and have a game like he did."

Ja Morant poured in 37 points and Desmond Bane scored a career-high 34, but it wasn't enough to knock off the Philadelphia 76ers on the road Monday night. Remarkably, it was the seventh straight game with at least 30 points for Morant. That's the longest such streak in Grizzlies franchise history. During this seven-game span, Ja is averaging 35.4 points (while shooting over 50%), 7.3 assists, 7.1 rebounds and 2.1 three-pointers.

The @sixers got the win in OT while Tyrese Maxey & Ja Morant both dropped 30+points in their duel!@JaMorant: 37 PTS, 5 REB, AST@TyreseMaxey: 33 PTS, 8 AST, 4 BLK pic.twitter.com/Fcgh05taaI

With MVP-contender Joel Embiid resting  Monday night vs. Memphis, the Sixers needed Andre Drummond and the rest of the squad to step up. And that's just what they got. Drummond racked up 16 points and 23 rebounds, Tobias Harris scored 31 and Tyrese Maxey pumped in a season-high with 33 points to go along with 8 assists, 4 blocks and 3 assists in the impressive overtime win over the Grizzlies.

Miami was extremely shorthanded in its loss to the Boston Celtics on Monday, forced to play without Jimmy Butler (toe), P.J. Tucker (knee) and point guard Kyle Lowry (personal). The Heat, who still have five contests left on their arduous six-game road trip, plays in Toronto on Tuesday, the second night of a back-to-back.

The NBA announced last week that DeMar DeRozan will be a starter in this year's All-Star game. It's the first time a Bull has been a starter since 2017, and will mark DeRozan's fifth appearance as an All-Star. On the season, he's averaging 26.4 points per game (his highest scoring average since 2016-17) and is the only player in the league averaging over 25.0 points while making less than one three-pointer per contest.

The Nuggets are rolling right now. They've won five consecutive contests (tied for their longest winning streak this season), including starting their current six-game road trip with four straight victories. During this five-game streak, Nikola Jokic is somehow averaging a triple-double (27.0 points, 12.4 rebounds and 10.0 assists) despite logging fewer than 33 minutes a night.

The Cavs were embarrassed Sunday in Detroit and were missing Darius Garland due to a sore lower back on Monday, but Brandon Goodwin stepped in and stepped up, finishing with a career-high 21 points in a win over the Pelicans. Cleveland trailed by 10 points in the final frame, but came back to secure a much-needed victory over New Orleans.

The Bucks lost 2 of the 3 games they played last week, and their only victory was a home win over the struggling New York Knicks. Sunday's loss to the Nuggets in Milwaukee was particularly disheartening, as Denver humiliated the home team 136-100. The Bucks will look to get back on track Tuesday in Minnesota.

The Mavs had won 3 of 4 (and 7 of 9) before suffering a disappointing loss to the Magic in Orlando on Sunday. The defeat can't be pinned on Luka Doncic, who stuffed the stat sheet with 34 points, 12 rebounds and 11 assists. It was the 43rd triple-double of his career, moving him into a tie for 10th-most triple-doubles in NBA history, which is incredible considering the kid is just 22 years old.

The Jazz, who have lost 9 of their last 11 games, received devastating news Monday. The team confirmed that Joe Ingles will miss the remainder of the 2021-22 season (and a chunk of the 2022-23 season) after an MRI revealed he tore the ACL in his left knee. Ingles, who was the runner-up to teammate Jordan Clarkson for the NBA Sixth Man of the Year Award last season, is in the final year of a $13 million contract.

The Nets have lost four games in a row, and things don't get any easier moving forward; they have four games left on their West Coast road swing, which resumes Tuesday night in Phoenix. In the 17 games they've played dating back to Dec. 30, Brooklyn is just 6-11. That's the third-worst record in the Eastern Conference, behind only the Magic and Indiana Pacers.

The Hornets are 2-3 over their past five games, and even in their wins, they have been porous defensively. The Hornets allowed their opponents to score at least 113 points in each of those five contests.

The Raps have registered two extremely impressive victories over the past few days. On Saturday, they outlasted the Heat in an epic three-overtime slugfest in Miami, and then beat the red-hot Hawks in Atlanta on Monday night.

The C's took advantage of a banged-up Heat team Monday, beating Miami by 30 points. It was Boston's fourth victory in their last five games. Jaylen Brown is averaging 29.0 points, 7.0 rebounds and 3.5 made treys over his last four contests.

Playing without Trae Young, who was sidelined by a right shoulder contusion he suffered on Sunday, the Hawks had their seven-game winning streak snapped Monday night. Delon Wright was inserted into the starting lineup but struggled, shooting just 1 of 7 en route to 4 points, 7 assists and 4 rebounds.

After losing back-to-back games on Thursday and Friday (at Golden State and Phoenix), Karl-Anthony Towns got the Wolves back on track Sunday, erupting for 31 points, 11 rebounds, 10 assists (vs. just a single turnover) and 2 steals in the Timberwolves 20-point victory over the Jazz. It was KAT's second career triple-double. Jaden McDaniels also chipped in 22 points (on perfect 9 of 9 shooting), 4 assists and 3 treys in 27 minutes off the bench.

It was reported over the weekend that LeBron James underwent an MRI that revealed general swelling in his knee. James has missed each of the Lakers' past three contests due to the injury and is expected to miss more. With L.A. having lost each of the three games LeBron sat out last week, it will be very interesting to see if the team can stay around .500.

On Monday, the Clippers wrapped an eight-game road swing with a loss to the Pacers in Indiana; however, the Clippers went a respectable 4-4 on the trip. They now return home to host the Lakers and Bucks later this week before embarking on another three-game road trip.

The Wizards are riding a five-game losing streak and are staring down the barrel of a brutal back-to-back. They have to play the Bucks in Milwaukee on Tuesday and the surging Sixers in Philly on Wednesday. Oh, and the Wiz will be without their best player, Bradley Beal, who is nursing a sprained left wrist.

On Monday, the Knicks snapped a three-game losing skid by beating the Sacramento Kings in MSG. Quentin Grimes chipped in 14 points off the bench in the victory and played very well on the defensive end. The rookie is averaging more than 24 minutes a night over New York's last four games, as he has secured a spot in coach Tom Thibodeau's rotation due to his impressive, all-around skill set.

Larry Nance Jr. has been sidelined since Jan. 6 due to right knee inflammation, but head coach Chauncey Billups told reporters over the weekend that Nance "is progressing every day" and "getting better." However, Billups said there is still no firm timeline for Nance's return.

Brandon Ingram has been sidelined five straight games due to a right ankle sprain, and the Pelicans have lost each of the last four contests he's missed. There is a possibility he returns to action Tuesday night when New Orleans travels to Detroit.

Despite playing without Derrick White (rest), Dejounte Murray (left knee contusion) and Jakob Poeltl (low back soreness) Sunday in Phoenix, the Spurs hung tough with the Suns. In fact, they had a 12-point lead in the fourth quarter before Phoenix sprinted past them at the finish. Murray has been playing at an incredibly high level this month, averaging 22.9 points, 10.1 assists and 9.4 rebounds over his previous 10 games.

Isaiah Jackson had 26 points and 10 rebounds in his first NBA start. It's so easy for him to be productive just by embracing rolling hard and playing above the rim. Important to note that he made a three too pic.twitter.com/HOqDJ77DL7

Domantas Sabonis entered the COVID-19 health and safety protocols on Monday afternoon. However, the Pacers were still able to beat the Clippers that night, thanks mainly to a breakout performance from rookie Isaiah Jackson. With Goga Bitadze (foot) and Oshae Brissett (right ankle soreness) also sidelined, Jackson made his first career start and responded with 26 points, 10 rebounds and 2 blocks.

The Kings have lost seven in a row, and Monday's loss to the Knicks in New York was their 12th straight defeat on the road. It's been two months since their last road victory, which came on Dec. 1. De'Aaron Fox (sore left ankle) has missed each of Sacramento's last four games, but head coach Alvin Gentry said Monday that Fox is "feeling much better" and is "not concerned" about the injury being a long-term issue.

Thunder fans got some bad news over the weekend when it was announced that Shai Gilgeous-Alexander, who suffered a right ankle sprain Friday against the Pacers, will be out at least through the All-Star Break.

Cade Cunningham missed all 10 of his field-goal attempts and was scoreless in the first half of Sunday's game vs. the Cavs. However, Cunningham put the Pistons on his back after halftime, scoring 19 points over the final two quarters to lead Detroit to an impressive victory over Cleveland. He finished the win with 10 rebounds, 10 assists (vs. just 2 turnovers) and 3 steals.

The Magic have won 3 of their last 4, with two of their most impressive victories of the season coming on successive Sundays (wins over the Bulls and Mavs). Franz Wagner poured in 18 points to help beat Dallas, including the clutch layup in the final minute. Over his last five games, Wagner is averaging 19.2 points and 4.0 assists while shooting a scorching 61.3% from the floor, 41.7% from downtown and 93.8% from the free-throw line

Christian Wood did his part, tallying 24 points, 13 rebounds, 2 assists, 2 steals, and a block on Monday vs. Warriors, but it wasn't enough to knock off Golden State. The Rockets' loss to the Warriors was Houston's fourth consecutive defeat and their 11th in a row at home.