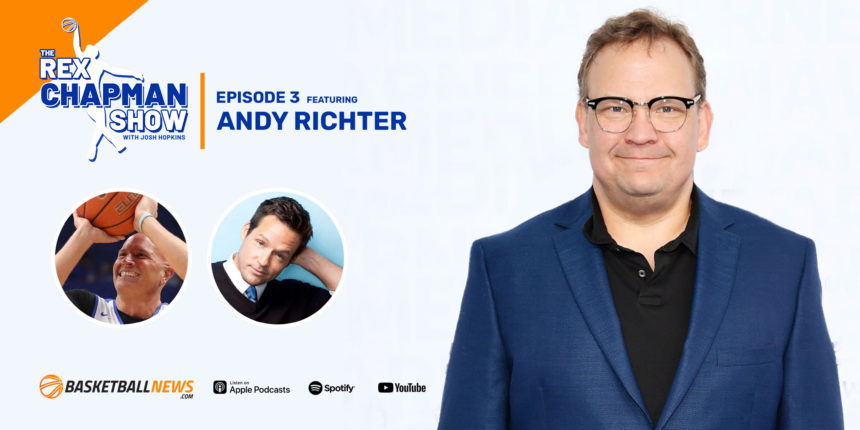 The Rex Chapman Show: Zion Williamson discussion and an interview with Andy Richter

On this episode of The Rex Chapman Show, Rex and Josh Hopkins are joined by actor, comedian and Conan O'Brien sidekick Andy Richter! With a number of great movies, where does Semi-Pro rank among basketball flicks? While on the subject of Hollywood, they also discuss Josh's appearances on Conan and more. Time-stamps are below!

20:10​ - How many celebrity guests has Andy sat next to during his run with Conan? And does Andy even remember Josh being on Conan?

34:00​ - How Andy became an actor and the risk involved with staying in LA long enough for a second audition.

41:00​ - Betting on himself when leaving a known commodity like the Conan to pursue more acting.

44:30​ - Andy enjoys making television and being a comedy producer, would like to do it in the future or just act and cash the checks.

60:00 - What is Sacha Baron Cohen like in real life after playing his husband in Talladega Nights?

1:01​ - Andy's relationship with Jane Lynch, dating back to Improv Olympic in Chicago and how they remain close all these years later.

1:17​ - Rex’s near encounter with Conan O’Brien while living on Josh Hopkins’ couch.

Steph Curry on if he's the MVP this year: "I gotta be"
3h

James Harden (hamstring) suffers setback, could be out until playoffs
7h

Steph Curry on if he's the MVP this year: "I gotta be"
3h

Russell Westbrook has been on a triple-double tear since the All-Star break
yesterday
Subscribe to our newsletter
SUBSCRIBE
Follow Us




Copyright © BasketballNews.com 2020. All Rights Reserved.
