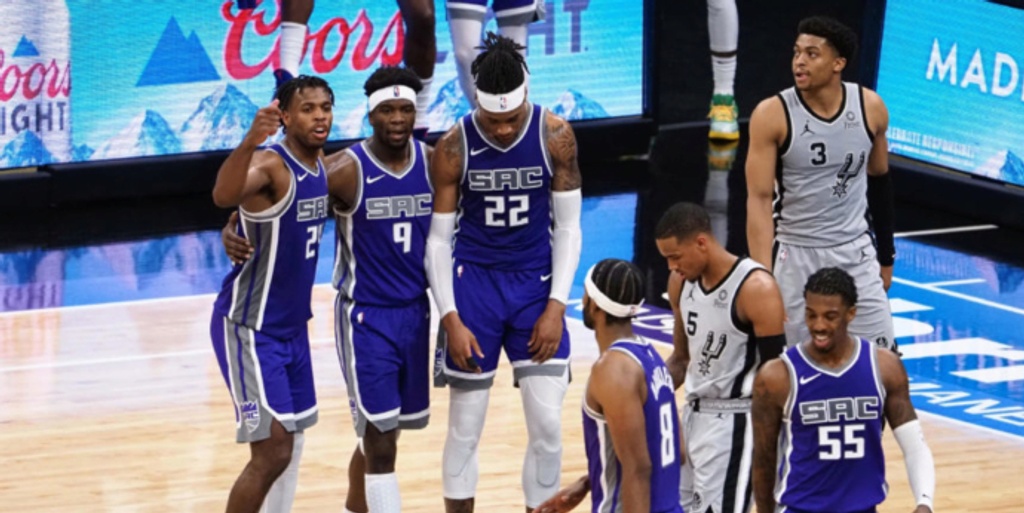 Welcome to “10th Place Matters” week. It is sort of like getting a participation trophy in fourth-grade athletics, but better because this is an occupation.

The NBA regular season wraps up next Sunday, and for the first time in history we can say 10th place carries some importance for something other than ping-pong ball arithmetic. The bigger (and arguably better?) NBA Playoffs include a play-in tournament this season, which makes the New Orleans Pelicans just the slightest bit relevant, along with the Chicago Bulls and Sacramento Kings.

New Orleans and Chicago sit in 11th place in their respective conferences, and that is where they will finish unless we see one of the craziest weeks in league history. Sacramento is No. 12 but is 2.5 games behind San Antonio.

The Pelicans remained in contention Sunday night with a victory against the Charlotte Hornets, as veteran James Johnson played the role of de facto Zion Williamson, and Chicago maintained its relevancy by defeating the Detroit Pistons, 108-96, to pull within 2.5 games of the Indiana Pacers.

Chicago has already won the season series against the Pacers and thus would have the tiebreaker if the teams finish tied for 10th, but Zach LaVine and Nikola Vucevic’s team pretty much needs to have a perfect week against the Brooklyn Nets (twice), the Toronto Raptors and the Milwaukee Bucks.

Chicago also needs Indiana to have a bad week, and the Pacers play five times in the next seven days, beginning tonight against Cleveland. Indiana also will face the Philadelphia 76ers, Los Angeles Lakers, Bucks and Raptors.

You never say never in the NBA, but the Pels, Kings and Bulls have only the slimmest of chances to extend their respective seasons. New Orleans is trying to do it without Williamson, after he sustained a broken finger; Pels EVP David Griffin said it was “egregious and horrific” and “violence” perpetrated by opposing big men who have learned to be physical with Williamson because they were getting away from it. At least that was Griffin’s story, and he was fined $50,000 on Mother’s Day by the NBA for expressing it.

The Kings are still alive after defeating the Oklahoma City Thunder by 28 last night, and their week ahead includes a rematch against OKC, a back-to-back road set in Memphis and their finale against the Utah Jazz on Sunday. Sacramento would lose tiebreakers with both the Spurs and Pelicans, so their chances are the slimmest of the slim.

"Whatever happens around the league happens. In four games, if we're in a play-in game, we're in," Kings forward Maurice Harkless said.

Maurice Harkless joined the postgame show to discuss the Kings success spreading the ball around Sunday night, and their chances at making the play-in tournament 👀 pic.twitter.com/hYa6I9CG1O

For those confused by the play-in tournament, BasketballNews.com did an explainer article detailing its structure and how the final four seeds will be determined.

But here’s how it works: There will be two No. 7 vs. No. 8 games, and those two winners (one from each conference) get the No. 7 seeds. As a practical matter, that means that if an 8 defeats a 7, the No. 8 team becomes the No. 7 seed and could end up having a worse record than the eventual No. 8 seed.

There also will be two No. 9 vs. No. 10 games, one in each conference, with the losers eliminated and the winners moving on to play the losers of the respective 7/8 games. The winners of those final two games get the No. 8 seeds.

And in the meantime, LeBron James, James Harden and a bunch of others get a plenty of extra rest and recovery time. If they return with as much gusto that Anthony Davis has shown lately for the Lakers, we can all erase our collective memories of the Lakers being oh so pedestrian this season.

There are other seeding battles to be determined this week. Philadelphia appears to be locked into the No. 1 seed in the East with a three-game lead over Brooklyn and possession of the tiebreaker. The Nets have a half-game lead over the third-place Bucks -- winners of five in a row -- but Milwaukee also owns a tiebreaker over Brooklyn. If the Bucks go 5-0 this week against the Spurs, Magic, Pacers, Heat and Bulls, they will get the No. 2 seed no matter what Brooklyn does.

Three-way tiebreaker scenarios between the Knicks, Heat and Hawks are dependent on the outcome of Tuesday’s Miami-Atlanta game.

In the West, Phoenix and Utah continue to battle for the No.1 seed, but the Suns’ losses to the Hawks and Lakers last week have put them two games behind the Jazz, who have won five in a row.

Should the Lakers be able to match the Blazers, they still lose the tiebreaker against Portland. Los Angeles finishes with games against the Knicks, Rockets, Pacers and Pelicans, so a 4-0 week by the Lakers and a 2-2 week by the Blazers would move the Lakers out of the play-in tournament.

If Dallas, Portland and the Lakers finish with the same record, the Mavs win the three-way tiebreaker by virtue of having won the Southwest Division.

Golden State has a half-game lead over Memphis for eighth place, and the Warriors and Grizzlies will play on the final day of the season with the winner getting the tiebreaker edge. Memphis will play five games this week to Golden State’s four, but the Grizzlies have the easier schedule. The No. 8 spot in the play-in tournament could be up for grabs.

San Antonio has lost six of seven and is limping to the finish line with a tough week ahead; according to Tankathon, it is the hardest schedule remaining in the NBA. The Spurs are playing Milwaukee at home, then traveling to New York for a back-to-back against the Knicks and Nets, then facing the Suns twice next weekend. The tiebreaker edge over Sacramento is a nice thing for Gregg Popovich to have in his back pocket, but an 0-5 week would open the door for the Pelicans and the Kings.

If San Antonio, New Orleans and Sacramento finish in a three-way tie, the Spurs win the tiebreaker by virtue of their 4-2 record against the teams they would be tied with. The Kings are 2-4 against the Spurs and Pelicans, and NOLA is 3-3 vs. Sacramento and San Antonio.

“I think we're a better team than what the record shows,” San Antonio’s Dejounte Murray said.

We shall find out in the week ahead, and the participation trophy for the 10 teams that miss out will be rendered in ping-pong balls, as usual.