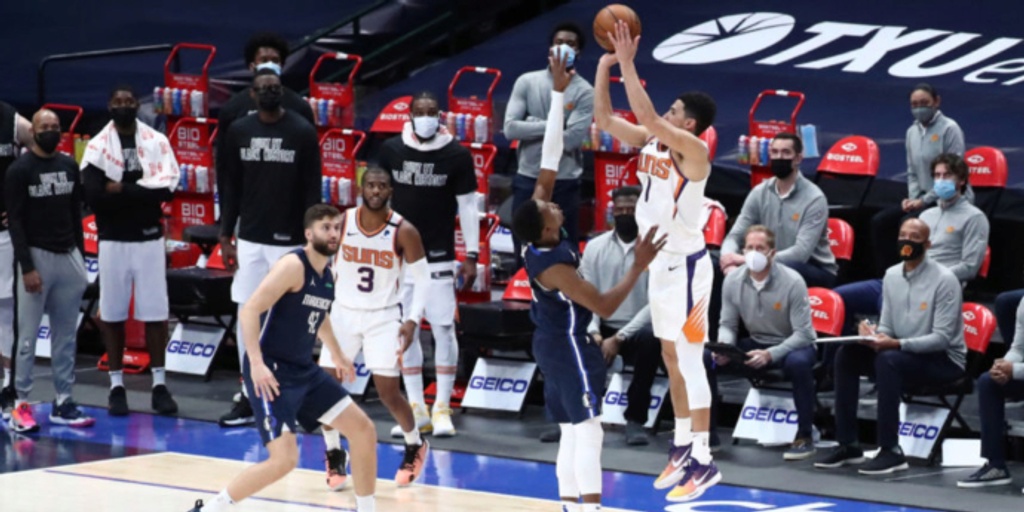 Devin Booker was the hero on Monday night, with his game-winning three sending the Phoenix Suns to a 109-108 victory over the Dallas Mavericks. But Booker is just as excited about the rapport he is building with backcourt mate Chris Paul.

"Iron sharpens iron,” Booker said after Monday's win. “We both hold each other accountable. We both have that similar approach where we want to win at all costs. We’re not worried about hurting anybody’s feelings -- on our team or the other team."

When the Suns traded for Paul in the 2020 offseason, everyone knew they had gained a star player who fit well next to Booker on paper. But already, the two have pushed each other and the Suns to one of the more promising starts in recent years.

Booker returned from a hamstring injury and scored 24 points in the victory over Dallas, while Paul had 34 points, nine rebounds and nine assists.

“We’re going out there to win basketball games and whatever it takes to do that. I’m learning from him every day," Booker added. "He’s been in every situation that I want to get to. I have the cheat code of being alongside him, his backcourt mate. From on the court to off the court, just everything he does — I’m a sponge to it.”

“It’s nice playing alongside a guy who pushes you,” Paul said to NBATV. “I trust him, he trusts me. When I’m passing up shots, he on my head, ‘Shoot that, C! Shoot that, C!'”

CP3 has been known as one of the better defensive point guards in basketball throughout his career. Paul has carried that pedigree to Phoenix, who now has the fifth-best defensive rating in the league. Two-way wing Mikal Bridges has also been wreaking havoc on opponents.

Between their efforts and improvements from Booker and Deandre Ayton, the Suns sit at 11-8 and have entrenched themselves as playoff contenders.