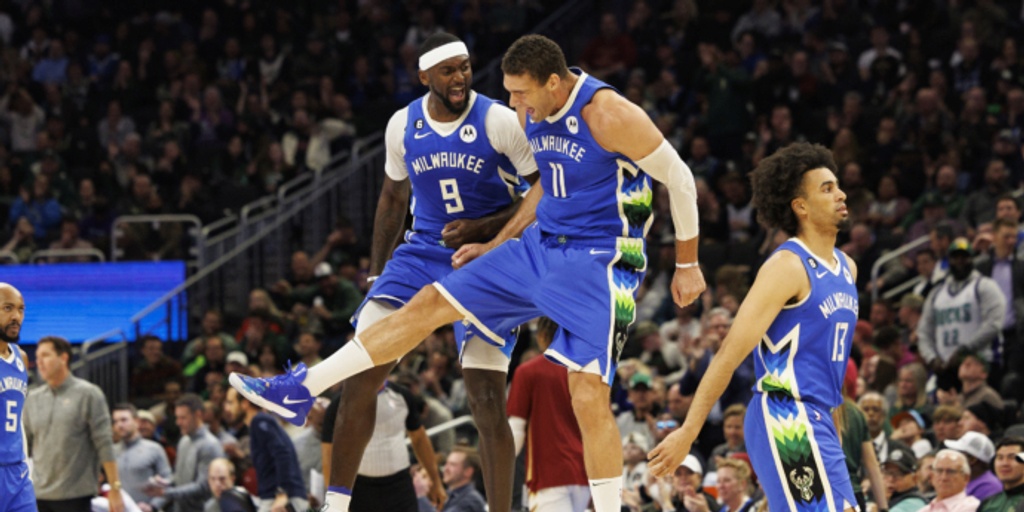 There's an existential dread that comes with facing the Milwaukee Bucks, particularly when they're healthy.

Jrue Holiday will laugh at your attempts to screen him, instead attaching himself to a ball-handler like he's a jersey decal.

Jevon Carter, thriving with more minutes, is every bit as annoying to deal with at the point of attack.

Giannis Antetokounmpo is present, even if he isn't there. You're always aware of where he is. Any joy you feel by breaking the first level of Milwaukee's defense is quickly replaced by nervousness.

If you're able to break the first level, and Giannis is stashed somewhere else, you still have to deal with the final boss: Brook Lopez.

Splash Mountain may as well be Bash Mountain this season; opposing players just aren't having much fun in the paint when Lopez is around.

Lopez is, figuratively and literally, at the center of that defense. They're even stingier in the half-court with Lopez on the floor (84.3 per 100) this season, thanks to his ability to wall off the paint. With the Bucks being more selective about the way they help from the perimeter, ball-handlers have been funneled into Lopez.

Only Nikola Jokic is defending more shots per game at the basket (8.2) than Lopez (7.6), but Lopez is allowing a much lower conversion rate at the rim (51.9%) than Jokic is (67.0%). Lopez also happens to lead the NBA in blocks (2.5 per game) among players who have appeared in double-digit games.

Because of the sheer size and length of Lopez, it's incredibly difficult to garner clean looks at the rim. Add in his understanding of timing and verticality — he very rarely leaves his feet before the shooter does — and you begin to understand why he's having an elite campaign in shot contests and blocks.

He put on an absolute masterclass against the Cleveland Cavaliers on Wednesday night. The spotlight was rightfully on the glamour end — he dropped a season-high 29 points behind an explosive 7-of-9 clip from three — but the way Lopez navigated the drop against the Darius Garland-Donovan Mitchell backcourt was a loud example of the quiet goodness he's displayed all year.

Brook Lopez is nasty in a drop, man. pic.twitter.com/6zMkQA5x0E

The Cavs generated a shade under 0.9 points per possession (PPP) on trips featuring a ball-screen defended by Lopez, per Second Spectrum. It's a wildly low number made more impressive by how good Cleveland's pick-and-roll attack has been this season (1.03 PPP, fifth entering Wednesday).

What's even wilder: That 0.9 PPP figure was actually good relative to how other teams have fared. On the season, the Bucks have allowed 0.81 PPP on trips featuring a ball-screen defended by Lopez. Among 56 players to defend 150 picks as the screener defender, that's the best mark in the league. And considering only Nikola Vucevic has faced more picks than Lopez (462 to 438), it's fair to conclude that nobody's fared better than Lopez.

Zoom out to include post-ups defended — and just general work as the last line of defense — I don't think there's been a better interior defender than Lopez, period. The only player keeping Lopez from being the we-don't-even-have-to-talk-about-it favorite for Defensive Player of the Year might be Toronto Raptors do-everything-man OG Anunoby — the NBA's current steals leader who can slide up and down the positional spectrum.

His presence makes life easier for everyone. Holiday and Carter can put their all into screen navigation, knowing that Lopez is behind them if they get caught up. Giannis can fly around more freely knowing Lopez has his back. The Bucks don't have to send extra help towards drivers because they trust Lopez can shut things down without getting himself into foul trouble.

As we saw last season, the Bucks can cobble together a workable defense when Lopez isn't available. But if the beginning of this seaosn is any indication, he makes this defense go from "workable and annoying" to darn-near impossible to score against.