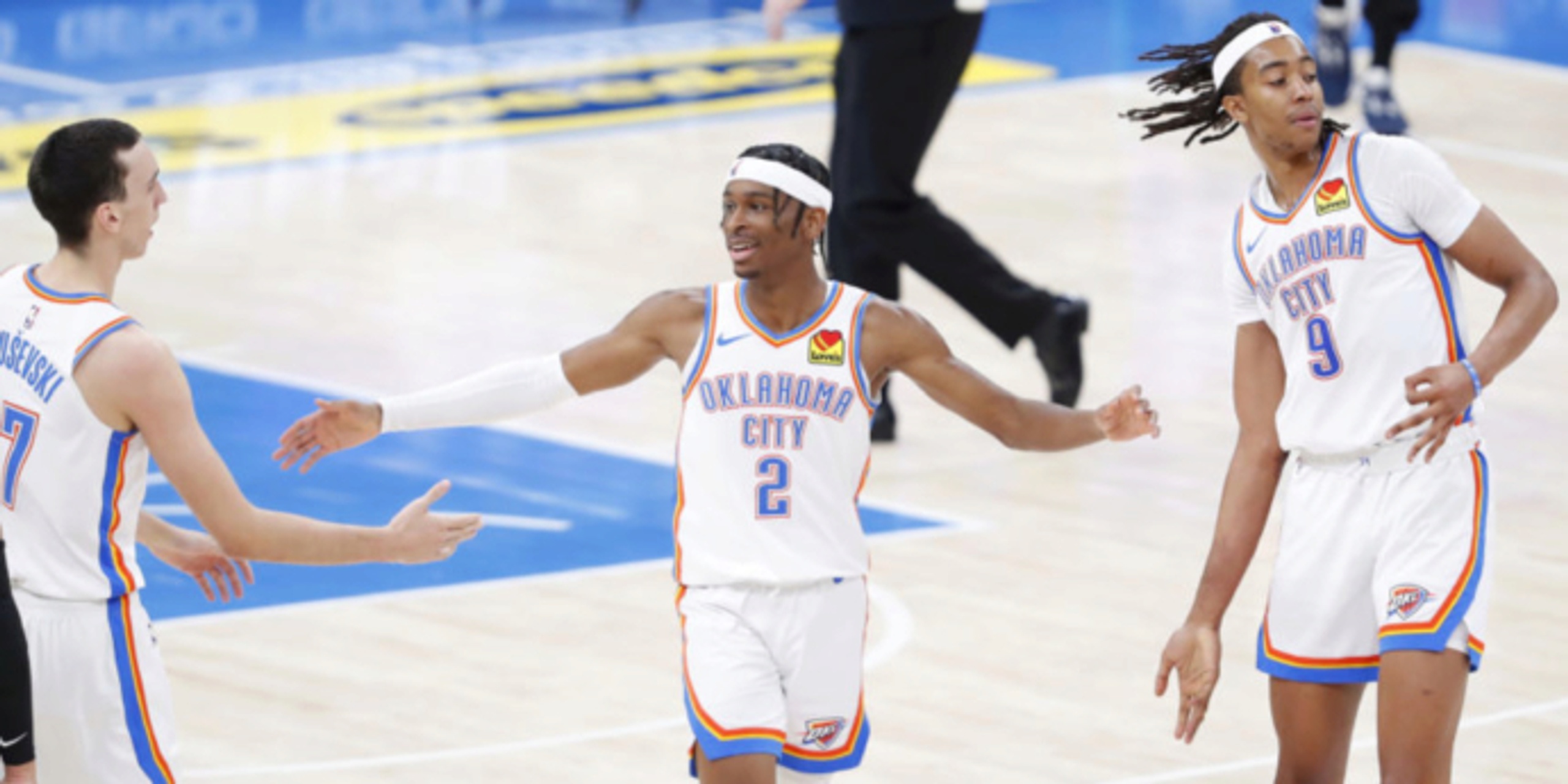 Young and still learning: The hidden joys of the Oklahoma City Thunder

They were blown out by the Detroit Pistons on Monday night, extending an absolutely dreadful stretch of losses for them as of late. Their past six games have gone as such:

For the mathematically challenged, that's five losses by a total of 114 points -- a 22.8 point average. Even with the win over the Raptors sprinkled in, the Thunder have a minus-22.9 net rating over their last six games. They have the NBA's worst net rating (minus-7.9) overall this season.

Things probably won't get much better in terms of wins and losses. Shai Gilgeous-Alexander, their All-Star caliber guard, is out indefinitely with right foot plantar fasciitis. Al Horford is essentially getting "DNP-Old" designations. The team is bad, and will continue to be bad.

Bad doesn't have to be boring, though. I would argue that despite the wacky deficits, this is a pretty fun group to keep track of from a development standpoint. The Thunder have intentionally shifted to go even younger to close the season, and we've been treated to some interesting flashes from their prospects because of it. Let's take a look at a few.

Maledon is hard-wired to make the right play. If he sees a help defender creep in, or a big man play a pick-and-roll a bit too high, he'll seek out the extra pass. He's more than willing to make the "one more" pass in a swing-swing situation. Keeping the chain moving is more important than seeking out individual glory for him. Maledon is a point guard's point guard in that respect.

That passivity has also gotten him into trouble at times this season.

There's nothing inherently wrong with making those corner skips or extra passes. In fact, the vision and precision needed to fulfill those responsibilities are necessary to thrive as an initiator. It becomes a bit of an issue when teams know you want to pass more often than not. The offense can and will bog down if you always pass up good shots in search of a great one.

It's likely due to the absence of SGA, but Maledon is finally starting to take charge more often. He's taken 10 or more shot attempts in 11 straight games dating back to March 16. Before that date, Maledon had only taken 10-plus shots in three games total.

He's converting a shade under 36% of his looks from three in this 11-game stretch. More importantly, he's doing it with volume (5.8 attempts per game). The efficiency with pull-up jumpers hasn't been there as of late, but his willingness to pull against "under" coverage is an encouraging sign.

It's less about Maledon needing to turn himself into a high-volume shot-creator, and more about making defenders respect the threat of his scoring so he'll be able to pass the way he wants to.

Someone who isn't gun-shy is Aleksej Pokusevski.

The results have been less than good, to be kind. 222 players have taken at least 250 shots this season; Pokusevski ranks 222nd in field goal percentage (32.3%).

It's been better as of late, though the easy caveat is that the bar couldn't get much lower. He still struggles to finish through contact; being listed at 7-feet tall and 190 pounds on Basketball-Reference, it's easy to see why he'd struggle in the paint.

The jumper has run a little hotter. During this recent three-game skid, Pokusevski has drilled 44% of his triples on six attempts per contest. They aren't just the spot-up variety like your typical stretch big. The lanky fella can knock down shots off the bounce, or get busy flying off of screens.

There are a handful of WTF plays from Pokusevski every game, but those should diminish as he gains experience and grows into his body. Even in the midst of bad games, there are plenty of skill flashes on display. Not losing confidence, while operating as the least efficient player in the sport, is important for his progression moving forward (and oddly endearing).

MOSES BROWN IS CLEANING UP

Let's start here: Moses Brown is a massive human being.

Listed at 7-foot-2 with a 7-foot-4 wingspan, Brown towers over just about everyone he plays with; he's still trying to figure out how to use that size. It's a bit wild how often he's dislodged on layup attempts (41.1 percent, via SportRadar tracking), and he doesn't bring the "oomph" that you'd think as a pick-and-roll threat (54th percentile, per Synergy). But what he lacks as a downhill threat right now, he more than makes up for as a menace on the offensive glass.

There's more to work out on Brown's behalf. Aside from the finishing, he's still learning the nuances of pick-and-roll defense. His size helps at the rim, but navigating the gap in drop defense has been an adventure. By adventure, I mean there are a significant amount of possessions where he doesn't venture past the elbow and allows ball-handlers to walk into pull-up threes or fruitful pull-up twos.

He opts to spread his arms wide in order to...well, I guess he wants to take away the pocket pass. But he drops so far back, ball-handlers never really have to push the issue in that way. I'd love to see him play a step or two higher; he has the length to bother a ball-handler's space, and it's not like he doesn't move well.

Use your limbs, big fella!