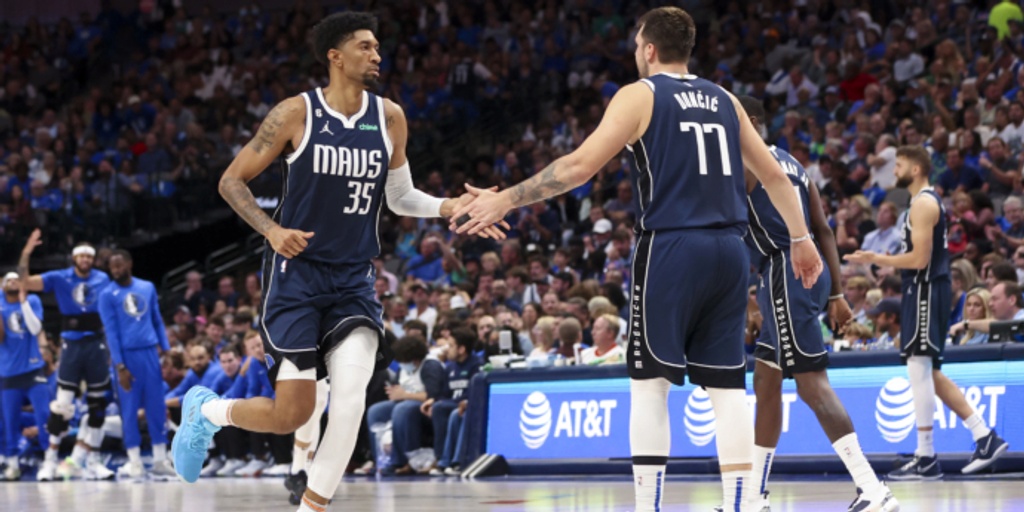 The Mavericks' Christian Wood experiment is going as expected

When the Dallas Mavericks pulled off a trade for Christian Wood — sending off a bundle of not-in-the-rotation pieces back to Houston Rockets in return — my mind immediately went to three places.

1) That's all it took to get Wood, huh? The Rockets must've really wanted to clear the runway for the younger guys.

2) Oh, Christ, the pick-and-roll tandem with him and Luka Doncic is going to be unstoppable.

Yes, that's all it took to get Wood in a contract year. There were just enough question marks, on and off the floor, for the price for Wood to drop. And Wood is talented enough to make the gamble worthwhile for a Dallas team that has to get a little creative to build around Doncic.

It's no surprise that the Mavs have been typo-good in his minutes offensively, boasting a 137.5 Offensive Rating. And by the way, the Doncic-Wood ball screen pairing has been as advertised.

You can't play drop coverage against these two. You're allowing Doncic to get a defender on his hip, freeze the help and have the big at his mercy. Wood can slow-roll it and get passes in the pocket, then either take a dribble and generate a shot at the rim or sprinkle in push shots in the intermediate area. Or, Wood can simply pop out and drain triples.

Turning a drop into a late switch, or just switching outright, is equally devastating. Wood has the right mix of skill and power to abuse smaller players. And again, asking a big to defend Doncic on an island is cruel and unusual punishment. There is no mercy, only hope for a missed shot.

Putting two on the ball against Doncic is the best of bad worlds, but even that is putting your team in scramble mode. Wood isn't an inventive passer, but he's shown he's capable of making basic kick-outs. And if Doncic is able to string out your trap, you're really in trouble.

The numbers back up this dichotomy. On trips featuring a Doncic-Wood ball screen, the Mavericks are generating 1.38 points per possession (PPP) — the best mark in the NBA among 42 high-volume pairings (min. 30 picks) per Second Spectrum.

They've been successful against drop (1.00 PPP), flat-out abused switches (1.47 PPP) and have generated plenty of goodness when Doncic has gotten two on the ball (1.11 PPP). Even when some of Wood's shooting numbers drop, you can probably bank in Doncic raising his three-point shooting (25% on 10.7 attempts right now). Good luck to your favorite team.

The defense is still worth monitoring. The Mavs are sporting a 110.4 Defensive Rating in Wood's minutes, and it's only slightly better when he's not on the floor. That's pretty solid!

I ... would still feel queasy, though; the Mavs have had Wood in a drop more than anything, almost copy-pasting what they did with Kristaps Porzingis last season. In addition to that, pay attention to the perimeter when Wood is involved in ball-screens. They're peeling in early to provide Wood with extra relief, inviting kick-outs.

You'll see successful reps from the Mavs in the video compilation below, but keep tabs on what's opening up.

About those kick-outs: Opposing teams have increased their three-point rate by over 15% in Wood's minutes so far, per Cleaning The Glass. Now, that number absolutely won't hold — that would easily be the worst mark among rotation players, probably ever, if it did. And on the flip side, the opposing rim rate has dropped 19% in those minutes — another number that won't hold.

But the theme is clear: We don't want to get beat at the rim when Wood is in. How they go about that accomplishing that — how often teams indulge in three-point hunting and what kind of shooting variance that produces — will all be worth keeping an eye on.

Though drop has been the primary coverage for Wood, they have sprinkled in other things. Against the Phoenix Suns and Memphis Grizzlies, there were instances of Wood playing at the level or outright hedging. Let's just say there's room for growth, especially in the retreat/recovery phase.

At some point, the Mavs will probably tinker with letting Wood switch more. Per Second Spectrum, Wood has only switched four (4) of the 38 picks he's faced as the screener defender. While he won't be confused with Bam Adebayo, that's easily his most comfortable coverage. We'll see if (or when) Jason Kidd will indulge.

For now, the Wood experiment is going as expected. He's helped juice the Mavs' attack on offense, while his presence defensively has opened up some things worth questioning within a playoff context.