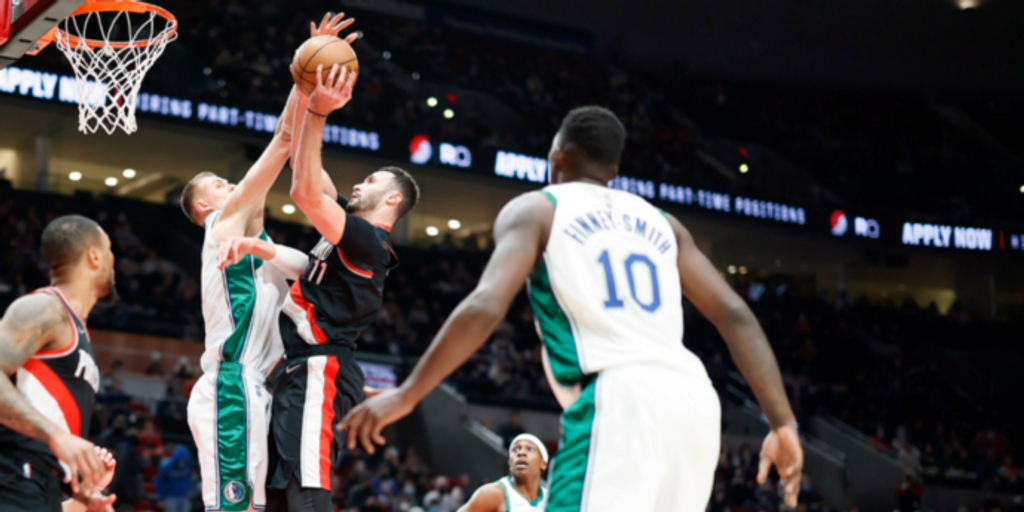 Without a true anchor, how do the Mavs have an elite defense?

Take a look at the top-10 in Defensive Rating this season, and most of the names will make sense.

Miliwaukee Bucks and Miami Heat? Elite personnel and coaching. Boston Celtics and Los Angeles Clippers? Ty Lue's a madman and Ime Udoka has a stellar defensive background, and both rosters navigate switches at a high level. The Memphis Grizzlies? They were good last year, and Jaren Jackson Jr. is having a fringe All-Defensive Team season.

And then, there are the Dallas Mavericks. They rank fourth in DRTG (106.4) this season, and easily hold the best defense (97.7 DRTG) in the league since the turn of the calendar.

Look at the Mavs' roster and point me to their middle linebacker like Draymond. Show me their elite point-of-attack guys like Bridges, or Jrue Holiday. Their toss-him-on-everything guy like a PJ Tucker or Marcus Smart. Fly-around-and-plug-holes guys like Vanderbilt or Nicolas Batum. Versatile rim-protectors like JJJ or the Twin Towers in Cleveland. (Fro Bros? Grow it out, Evan, so we can make this happen!)

You really can't, and that's what makes this Dallas team fascinating. There isn't an elite guy on the roster; heck, their most reliable wing defender over the past few seasons is reportedly on the trade market.

How in the name of all that is holy are they pulling this off? Are we all living in a simulation?

(Yes, actually. Life is a giant Black Mirror episode; I've been screaming about this for years.)

Oddly enough, it begins with their offense.

When you hear of a good offense leading to a better defense, it's generally within the context of made baskets. If your opponent is constantly taking the ball out of the basket, it's typically easier to set up your half-court defense.

That's true for the Mavericks, who rank No. 3 in points per possession allowed following a made basket (0.99 PPP), via Inpredictable. Beyond that, I think it's worth noting how their offensive approach helps their defense.

The boring answer behind the Mavericks' defensive leap? They're doing a much job of navigating transition opportunities.

Per Cleaning The Glass, the Mavericks allowed 128.3 points per 100 transition plays last season. That's down to 117.7 this year — nearly a 10-point decrease, and a shift that took them from 21st to seventh.

Effort and awareness play into that, of course. It's been a pleasure watching Tim Hardaway Jr. and Jalen Brunson high-tail it from the corners in order to match up with guys after misses.

Here's something I'm trying to work through: How much of a head start do the Mavericks get due to their offensive alignment?

They run over 39 spread (5-out) pick-and-rolls per 100 possessions, the third-highest rate in the league per Second Spectrum. They're also posting up more than they did last year (6.6 to 8.0); Kristaps Porzingis is posting slightly more, and Luka Doncic has nearly doubled his rate from the year before.

Because of the shots they get, and because of how their players space the floor — they almost always have two players stationed high on the floor as kickout options — it's easier to get back. Here's a quick stillshot of a Luka post-up just to get a visual. 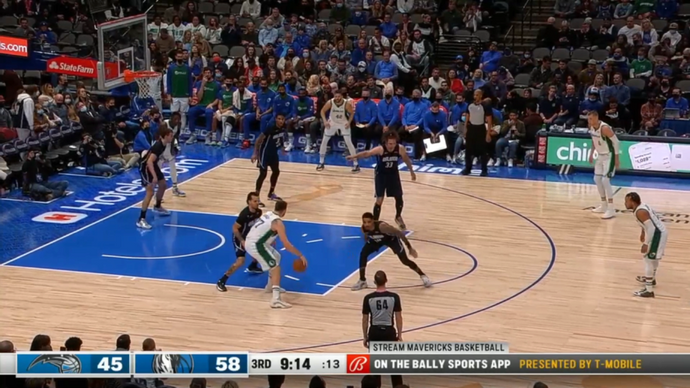 Dorian Finney-Smith is roaming the dunker spot (subscribe!), but the point remains. Both Brunson and Porzingis are spacing well beyond the three-point arc. They're good enough shooters to stress defenses from that range. But within this context, it won't take much for them to get back on defense because of where they're located.

As far as their half-court defense, the Mavericks don't do anything too crazy. They're primarily a drop coverage team with a hankering for late switching. Their defensive shot profile has improved because of this; they're allowing a lower share of threes and shots at the rim than last season, per Cleaning The Glass.

Porzingis is protecting the rim at a high level; opponents are only converting half of their shots against him, though he's contesting fewer shots than last season.

With that, it's worth noting that Porzingis is playing a step or so higher in his drop than he did last year, making it a little more difficult for ball-handlers to build momentum.

The Mavs are doing this thing where, if the ball-handler's defender can't stay attached cleanly over a screen, they'll pass off their man to Porzingis in the 14-to-16 foot range. He isn't a switch big in the Bam Adebayo mold, but he can use his length to navigate closer quarters.

The Mavs switch more frequently and effectively with Porzingis off the floor, per Second Spectrum. Having Maxi Kleber (looking good again!) or Dwight Powell at the 5 gives them more mobility, thus allowing them to flatten out offensive actions a little easier.

Head coach Jason Kidd hasn't quite gone into his Milwaukee bag in terms of ball pressure, but he'll sprinkle in some tricks. A funky counter they threw in their recent outing against the Oklahoma City Thunder was a hard double following a switch. Shai Gilgeous-Alexander simply wasn't prepared for it.

Beyond that, the Mavericks are just kinda working hard and nailing the little things. This is a group that talks, points and moves with a purpose. Rotations are tighter; scram switching feels like less of an adventure.

Brunson's fighting at the point of attack despite his size limitations. Hardaway hasn't allowed his shooting to affect his defensive effort. Frank Ntilikina and Josh Green (keep an eye on him) are bringing youthful exuberance. Even Luka is giving more effort on the weak side of actions, even if he gives me Harden vibes.

(Seriously, he reminds me a bit of how James Harden has been used the last few seasons. They park him in an area, and switch just about any direct action involving him to keep him in said area.)

There are still holes to pick at within a playoff context.

Brunson can be hunted on switches; Porzingis still struggles against stretch bigs. Luka has switched more screens than any other Maverick, per Second Spectrum, and that's mostly because screen navigation is a chore for him.

But for now, the Mavericks are locked in. They're "the whole is greater than the sum of its parts" personified. If they can replicate most of this during postseason play, we may have to rethink their ceiling.