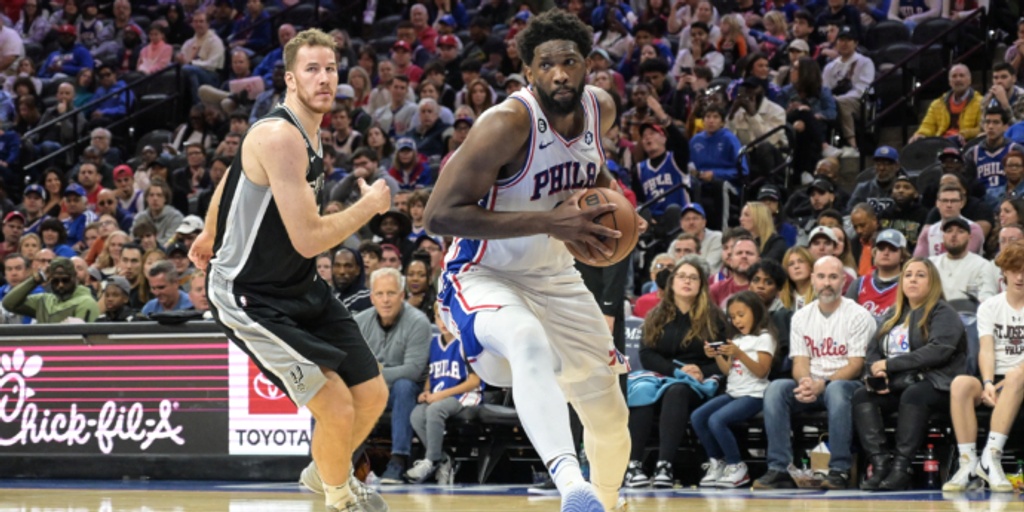 PHILADELPHIA (AP) — Good news for Philadelphia 76ers fans: They can keep their No. 21 Joel Embiid jerseys.

And don’t worry about a trip to Delaware just to watch Embiid and James Harden play for the developmental Blue Coats.

The All-Stars are not going anywhere — well, except Toronto for games Wednesday and Friday against the Raptors — and the Sixers are not going to finish the season 0-82. It only felt like the sky was falling in Philly after an 0-3 start.

“From the fans' perspective, yeah,” Embiid said. “They probably wanted me to be traded and the whole team to be sent down to the G League.”

The reigning NBA scoring champion, Embiid kept his cool, even as boos inside the Wells Fargo Center got louder as the Sixers lost their first three games before they rebounded at home to beat Indiana on Monday night.

Yes, coach Doc Rivers has to figure out how best to use a healthy and invigorated Harden with Embiid and still find room for Tyrese Maxey and Tobias Harris to score. And Rivers is still looking for another rotation player to emerge off a bench full of new faces. But it was Embiid’s slow start — OK, slow by the 7-footer's standards — that raised early concerns.

He scored only 15 points on 6-of-21 shooting and did not score in the second half of a loss to Milwaukee. A 37% shooter from 3-point range last season, Embiid missed 5 of 6 in the opening-night loss at Boston. He also had 10 turnovers in his first two games, uncharacteristically awful numbers that might have been rooted in injuries.

Rivers eventually revealed Embiid suffered in the offseason from plantar fasciitis, and the foot woes slowed the big man to the point where he was essentially sidelined headed into training camp. Only now, Rivers said, is Embiid starting to round into game shape.

Embiid said the foot injury “came out of nowhere” while he worked out over the summer in Los Angeles and hurt him to the point where he couldn’t walk. Often one of the more jovial players when he talks to the media, it turned out Embiid wasn’t entirely joking when he said last month before the start of camp his biggest offseason accomplishment was staying in bed.

Turned out, he needed to stay off his feet.

Embiid has played banged-up for the bulk of his NBA career — he famously missed his first two seasons with injuries — and suffered a right orbital fracture and concussion in last season’s playoffs. He had offseason surgery to repair the torn ligament in his right thumb suffered in the playoffs and a procedure to repair an injury to his left index finger.

“You still think about it, especially when it comes to boxing out,” Embiid said Monday. “I’m still not comfortable using my hands and my fingers because I think that’s how I got hurt in the first place. My finger got caught on somebody. I’ve still got to get comfortable with that. Boxing out, I haven’t been using my hands much. I’m trying to use my elbows and my forearm. I’m sure over time it’s going to get better.”

Embiid, the MVP runner-up each of the last two seasons, scored 26 points on 8-of-13 shooting against the Pacers with three blocks.

“I liked how he approached the game,” Rivers said. “He kind of had great patience. He kind of let the game come to him.”