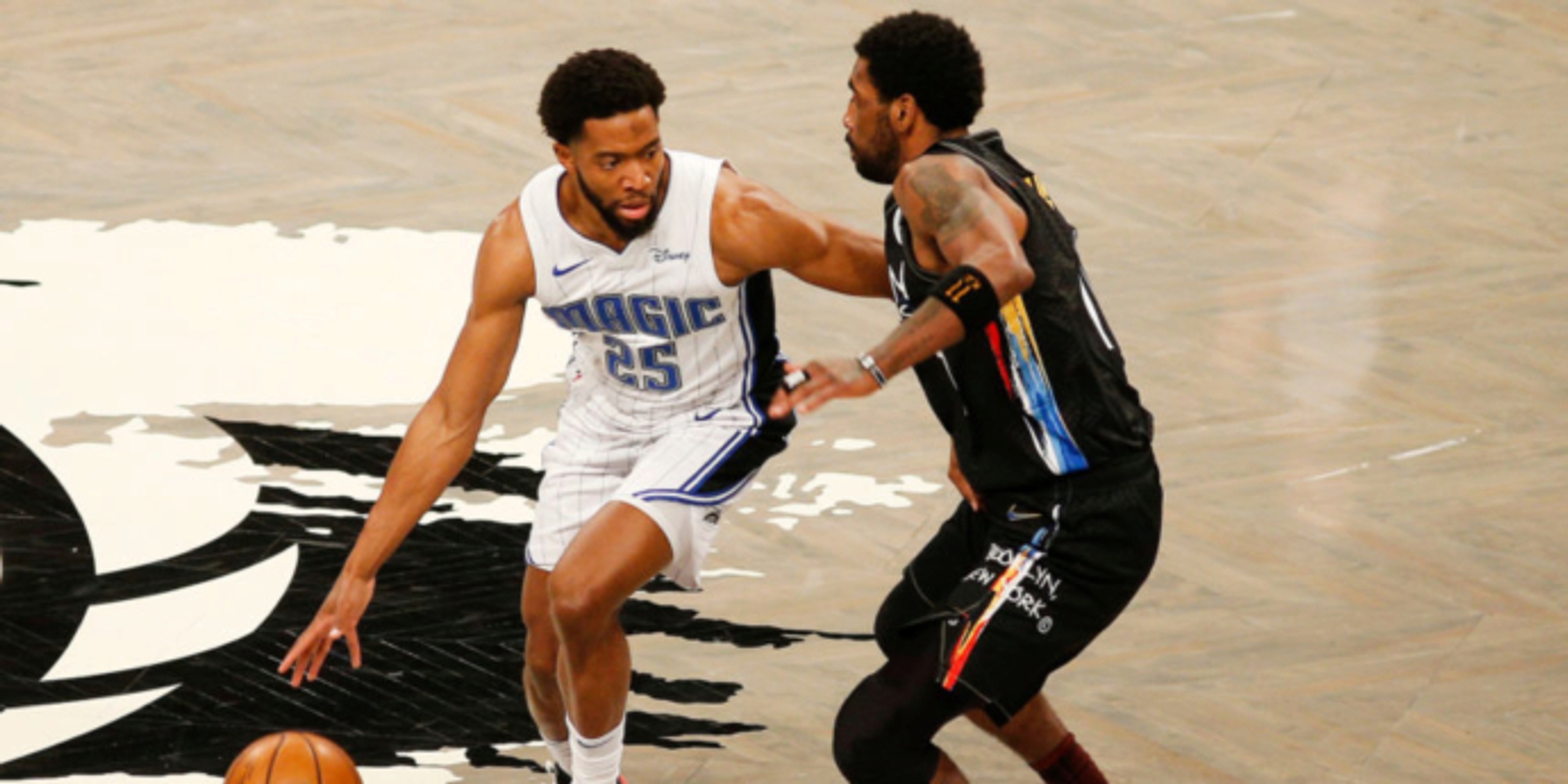 That’s what life’s been like for Orlando Magic point guard Chasson Randle since he signed a two-way contract with the team a month ago, in a wild succession of events over a small period of time.

Originally arriving to the Orlando G League Bubble as a member of the OKC Blue under the Thunder umbrella, Randle’s stay at the ESPN Wide World of Sports Complex was much more short-lived than others. Following a 22-point performance in a close loss to the G League Ignite, Randle and the Blue were set to take on the Canton Charge on Feb. 14.

Preparing to take his pregame nap, he got a call from his agent, Darrell Comer. Randle found out that he would be playing for the Magic. He had the option to suit up one more time for OKC, but was suggested not to do so in order to avoid the risk of injury.

“Initially I was surprised because I knew they had just signed Frank Mason and I hadn't heard of any injuries that he had,” Randle told BasketballNews.com in an exclusive phone interview. “I was grateful that another opportunity was coming my way and was excited and didn't end up taking my pregame nap. It was pretty cool to get that call.”

Despite his new affiliation, Randle didn’t spend any time with the Lakeland Magic before joining the big club. So no, he didn’t get any rings or hardware when the team took home the G League title last week.

“I had spoke with one of their assistant coaches when I was leaving the bubble and when I was coming to the team, and he was like, ‘I hope we don't have to see you,’” Randle said with a laugh. “I'm glad they came out with the victory in the championship and I won't take any credit. I couldn't do that.”

Prior to latching on with Orlando, the last time Randle stepped foot on an NBA floor was March 10, 2020 for the Golden State Warriors. Nearly a year later, he was back in the Association, and it didn’t take long for him to find that out. In his first game, Randle was assigned the task of guarding his former teammate Derrick Rose. The next night? Stephen Curry.

“It's like that was my moment of, 'Hey, you've got two of the league's best point guards ever in front of you. We're back,'” Randle chuckled.

“I think first, it's just realizing that it's a process. Everything is not going to go perfect. Control the things that I can control, and that's my energy and effort and intensity out there on the floor, and then following the team's game plan. I think once you can hone in on those things, the basketball just becomes the basketball. You play instinctively and try to make plays when you're out there. That's kind of how I approached it.”

In 11 games with the Magic, Randle has recorded multiple assists in eight contests, including five or more dimes in three of those. Despite not getting too many touches, he ranks fourth in the NBA in assist-to-usage rate with a 1.51 ratio, per Cleaning The Glass.

Remember, this is a man who was just thrown into the fire right away -- leaving the G League bubble, getting acclimated to a new organization, figuring out a fresh system with different plays and teammates -- all the while having to abide by the league’s strict health and safety protocols.

“First, it's like, 'Just play hard man, and let the rest take care of itself.' Just trying to pick up everything and learn,” Randle said. “It's the NBA though, this is a job. You have to be ready, prepared, and take advantage of every opportunity you get.

“Even [during the] All-Star break I was able to catch my breath a little bit. But I stayed in Orlando, and the way that things were set up with us having to test every day, I didn't want to risk anything, so I stayed here and got some extra work in with the staff and stuff. So it was cool. Very fortunate man, just blessed to be in this position.”

Randle’s teammate and fellow member of the Orlando guard room, Michael Carter-Williams, can’t say enough about how ready Randle has been for the team.

"He's definitely taken full advantage of his opportunity,” Carter-Williams told BasketballNews.com, following an interview for his own profile. “He got called up at a time where he was gonna be playing right away. He was ready, he was in shape. He picked up the plays quickly, spent time learning them at a fast pace. He's been great for us, and we're gonna continue to need him. You can just tell before he came in that his preparation was great, so I'm glad all that's paying off for him.”

"I'm definitely grateful for his comments,” Randle said in response to Carter-Williams’ praise. “He's been super helpful for me [with] just learning the system, what the coach wants from his point guards and the way that they want to play. He's helped me with the plays and everything, so he's been great for me. I mean, for him to be Rookie of the Year and then to go through what he's been through in his career, it just shows what type of player, what type of person he is, his determination. He's turned himself into one of the best defenders in the league man, and he's definitely somebody that I pay attention to and watch in practice and try to pick up little things from. He sets the blueprint for what a guard can be defensively. He's great."

Randle and Carter-Williams are both playing extended minutes as Orlando continues to be on the mend. From the moment the season tipped off, the organization has been riddled with injuries, particularly to the upstart young backcourt of Markelle Fultz and Cole Anthony. Such setbacks have decimated the roster and led to ever-changing rotations. Whether it’s been due to the scheduling or demand of the season, Randle admits he’s never been in a scenario with this many of his teammates sidelined.

This would be a difficult situation to figure out for anybody on that squad, so for somebody who’s spent a month there? It’s even extra challenging. Randle is still studying the coverages that head coach Steve Clifford has in place defensively, and he’s also got an All-Star big man teammate in Nikola Vucevic that commands the ball as the focal point of the offense.

“He demands a lot of attention,” said Randle, who once played with a similar player in Joel Embiid when he was with the Philadelphia 76ers in 2017. “The system here is set up to feed the post and all of that. It wasn't an adjustment, but it was pretty cool to have that as a weapon on your team.

“Just trying to figure out how I can best help him get the ball and put him in positions. It doesn't matter where he's getting it, he's getting a bucket. But as teams hone in on him and key on him, just trying to make it a little bit easier on him and then spacing the floor, like being an option for him as an outlet if he gets in trouble and needs to kick it out. Being ready to shoot and knock one down for him.”

Though Vucevic is doing everything he possibly can to contribute to winning, he and the Magic are on a sizable skid, dropping eight straight games and plummeting in the Eastern Conference standings. It’s going to take more than one player to snap out of this funk.

“I think the onus is gonna be on us to pull ourselves up out of it. We've got to want it. We can't get used to this feeling, losing,” Randle said. “It's not gonna be easy. Even with the injuries, nobody's gonna feel sorry for us -- this is the NBA -- but it's gotta be us. We've just gotta hone in on the little things we need to defensively and continue to play the way we need to play offensively. Take care of the ball, and we'll be good.

“I think getting guys back will be helpful and hopefully, we can make some type of push towards giving ourselves a chance to play for something at the end of the season."

Ask Randle about how he’s performed since he made the jump to Orlando and he’ll say he’s done pretty well. He’ll tell you that he’s showcased his ability to shoot the ball and run the offense by getting others involved. Defensively, he believes his intensity has been there and that he's been in the right positions to guard the ball. While it sounds cliche, he wants to improve in every facet in every single game.

“It's not one thing that I don't think I can do better. I'm the type of guy that doesn't want to settle,” Randle said. “I look to stay aggressive on both ends. I think that's gonna be key, especially with the attention that some of our players are getting on the offensive end. And then defensively, just making sure that I'm a presence. That's something that I want to continue to do. I'm excited for [this week].

“Each game is like a new opportunity. It's like a new life. You play video games, you might win a round or you might lose a round, but you get that new life and an opportunity to do it again. I'm excited for the rest of what's ahead."

Randle began this basketball season with OKC in the G League, teaming up with promising talents such as Aleksej Pokusevski, Moses Brown and Omer Yurtseven (“Their potential and upside is tremendous, especially with the size and length they have as players,” he adds). Randle is grateful that the Thunder presented him with an opportunity to get back into the gym, work out with talented players and be a part of a positive environment.

He even got the chance to take on top-projected 2021 NBA Draft Class prospects in Jalen Green and Jonathan Kuminga (“Their talent spoke for itself...they definitely proved their worth," he said).

But as we make our way into spring, Randle has returned to the highest level for his fifth stint in the NBA. Recently, the league announced amendments to its two-way contract rules, allowing players who are those deals to play an unlimited number of games in the 2020-21 season.

Randle is included in that field of players. Two-way contracts are only a partial guarantee financially, and sometimes, the same goes for a roster spot. With the trade deadline approaching, and when the team gets healthier, things could change. Only time will tell.

Whatever the case turns out to be for him personally, Randle won’t change the way he handles his business.

"The way I live my life man, I never really bank on anything. I don't ever just want to relax and feel complacent,” Randle said. “I know that every day I have to prove myself. I'll just have to continue to play hard and be myself and try to contribute in any way I can to help this team win games, and the rest will take care of itself.

“Whether it's a guaranteed contract, non-guaranteed, whatever, I just try to keep my head down, work hard, be me, play a certain way and let the chips fall where they may."