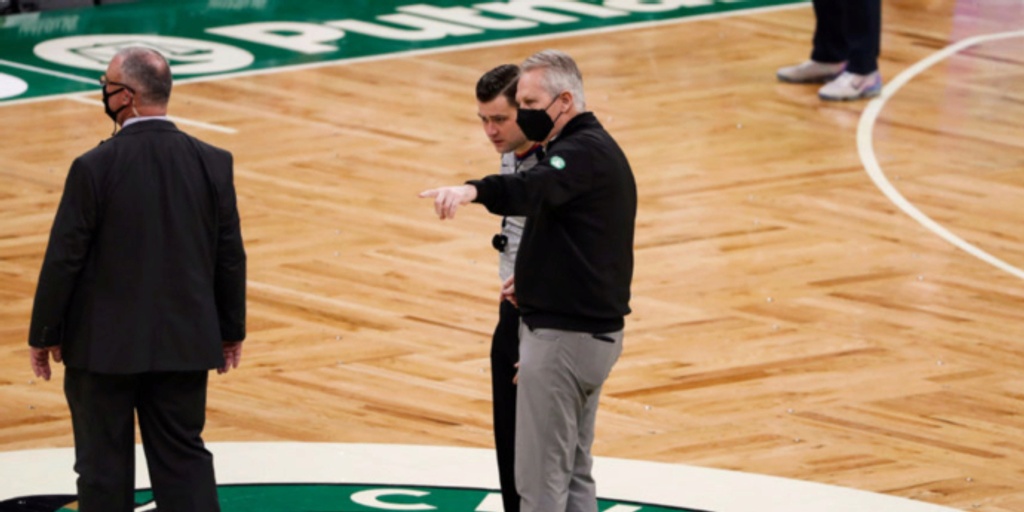 Celtics GM Danny Ainge: 'Our roster obviously is not good'

The Boston Celtics dropped to .500 again on Wednesday night after a 122-114 loss to the Atlanta Hawks. General manager Danny Ainge did not mince words about the state of the team this morning.

“Our roster obviously is not good. I mean, we are a 14-14 team. There’s no ifs, ands or buts about it. That’s who we are,” Ainge said on the radio show Toucher and Rich. “This team, where we are, 14-14, if there’s somebody to blame, this is Danny Ainge to blame. This is not Brad Stevens. It’s not Jayson Tatum or Jaylen Brown. It’s, like, not good enough right now. And we all know that. And, you know, we need to get better.”

Boston, like many NBA teams, has battled a rash of injuries and COVID-related absences this season. They did not start a traditional point guard in Wednesday's loss with Kemba Walker out for the game. Marcus Smart remains out with a calf strain, while Daniel Theis is nursing a finger injury and Walker continues to get acclimated following a knee injury.

“I think that the easy answer is obviously we haven’t played [as] well as we expected,” Ainge said. “But – and this is not a spin and this is not an excuse – I’m just saying that our starting team, what we envision as a starting team, has played 20 minutes all year. We just haven’t gotten any sort of consistent flow or groove. We’ve had great moments, good games, good wins, and just a lot of stinkers."

That starting unit -- ideally consisting of Kemba Walker, Marcus Smart, Jaylen Brown, Jayson Tatum and Daniel Theis -- has logged just under 21 minutes on the floor this season, and is a plus-15.6 points per 100 possessions in those minutes. No five-man combination has cleared 100 minutes of playing time together. A whopping 13 different Celtics have started a game so far.

“This is such a strange time with [no] practice and, you know, COVID, it’s just weird,” Ainge said. “Guys waiting for test results and not practicing near as much as we have [in the past] and the short season turnaround, all those things have been factors.

“When you make your player that you peg as being your eighth-best player on your team, and needs to play a certain role – and all of a sudden he needs to be your fourth-best player, you’re not as good of a team,” he added. “And you can get away with those things for short stretches in a season, but it’s hard to get away from them for the whole season."

Ainge and the Celtics have already hinted at potential trade-deadline plans. But regardless of what happens, the veteran GM knows there are layers to addressing a roster with so many injuries.

“Yes, you can go add some pieces, but you’re giving – you’re sacrificing other things,” he said.