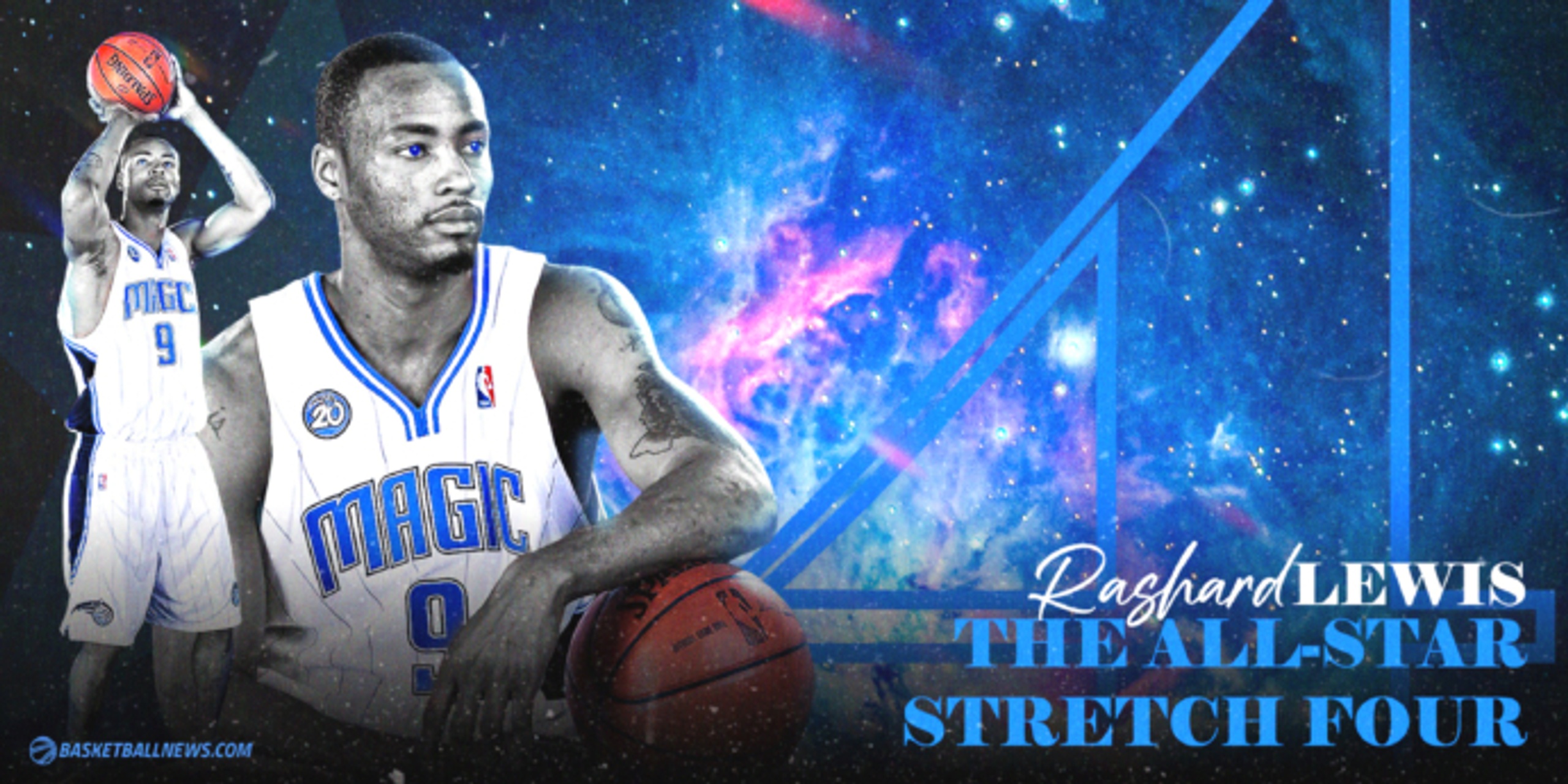 In this second installment, Mat goes in-depth on two-time All-Star power forward Rashard Lewis and his lasting impact as a stretch 4 with insight from Bob Beyer and Ahmad Ajami, two former Orlando Magic assistants who worked closely with Lewis.

Like many things in basketball, the concept of the "stretch 4" was not invented in the 2000s.

However, before the turn of the century, the archetype was almost exclusively viewed as a matchup-based tool. Using a baseball analogy, it was like having a lefty reliever in the bullpen reserved for specific circumstances rather than an ace at the head of your rotation.

But that all changed when a combination of untimely injuries and coaching ingenuity led to Orlando Magic head coach Stan Van Gundy starting Rashard Lewis at the power forward position. Lewis became a true All-Star while playing the stretch 4 and helped influence this revolution.

What Made Lewis Special

Like his stretch-4 predecessors, Lewis was lethal from the perimeter. In the 2008-09 season, he shot nearly 40% from downtown while leading the NBA in total three-point makes and attempts.

Despite his prowess, Lewis was far more than just a stationary sniper. During his formative years, he underwent what I call "the Anthony Davis growth trajectory" — a phenomenon where a basketball player grows up playing as a guard, hits an unforeseen massive growth spurt and then matures into a big with guard skills. And, because that happened, Lewis was able to combine a 6-foot-10 stature with his bucket-getting chops, which earned him the moniker: “Sweet Lew.”

“At that time, length and athleticism at the 4 wasn’t as prevalent as it is now,” said Ahmad Ajami, a former Magic assistant coach under Van Gundy for five seasons between 2007 and 2012.

“He could play both inside and out,” Van Gundy’s longtime right-hand man Bob Beyer stated about Lewis.

Too big for smalls, too fast for bigs. This was a recurring storyline throughout Lewis’ career.

That narrative reached its climax during Orlando’s iconic 2009 Eastern Conference Finals bout with the LeBron James-led Cleveland Cavaliers. During that series, Lewis burned slow-footed big men Zydrunas Ilgauskas and Anderson Varejão with his superior quickness, and alpha'd the smaller Delonte West by elegantly lofting jumpers over top of him.

“The guy who probably [doesn’t get] the credit that he deserves is Rashard... It [all] goes back to Rashard,” Beyer recalled when describing Orlando’s success against Cleveland. “Rashard could exploit their two bigs out there.”

In the six-game series, Lewis eviscerated Cleveland, averaging 18.3 points on 64.0% True Shooting, all while hitting some critical shots en route to Orlando’s only title appearance of the aughts.

Throughout his career, Lewis’ impact derived primarily from his value as a scorer and spacer. During his All-Star campaign in 2008-09, he was second on the Magic in both scoring volume and efficiency (among players who played at least 50 games). He also ranked in the 93rd percentile in spacing league-wide, according to BackPicks.com.

The impact metrics available at the time seem to agree with his nomination, painting Lewis as a fringe All-Star contributor.

However, what he accomplished by working in unison with Magic frontcourt mates Dwight Howard and Hedo Türkoğlu was much more important than his individual success. In isolation, each member of the trio was a solid offensive player. But in the aggregate, the three coalesced to form a multi-faceted machine.

On the surface, this particular Magic team greatly resembled the infrastructure of the two-time world-champion Houston Rockets from the 1990s. Under the guidance of Rudy Tomjanovich, those Rockets deployed a progressive 4-out, 1-in offensive scheme with the legendary Hakeem Olajuwon flanked by four shooters on the perimeter.

However, those Houston teams were founded on Olajuwon’s reputation in the post that allowed him to regularly commandeer the attention of a second defender (like this). Meanwhile, Howard was more of a play-finisher than a pure isolationist on the low block.

“Dwight could really excel when he was on the move. He was a good runner in transition. He was a good roller in pick-and-rolls,” Beyer said. “Runner, roller and the other thing — we would get a lot of spin-out lobs.”

Pair Howard's finishing with TürkoÄŸlu’s size, ball-handling and pull-up shooting, and add Lewis’ expansive scoring repertoire, and you had a recipe for offensive brilliance.

The Magic (like the D’Antoni-led Suns) were a pick-and-roll-centric team, with their pet play being a three-man action involving their frontcourt triumvirate.

Beyer said that Orlando called it a “Thumb Down Spread,” basically a middle pick-and-roll featuring TürkoÄŸlu as the ball-handler and Howard as the screener, with Lewis lurking one pass away.

Here’s a demonstration of the play in theory and in practice (with a roll-and-replace wrinkle from Lewis):

“That was our go-to play,” Beyer said. “It forced the defense to protect the basket... because Dwight [was] such a dynamic roller. If you consistently dropped your big back to take the roll away, Hedo was more than capable of making that three-point shot or pull-up two. We would run the roll-and-replace action where we would come and lift Rashard up, and then, there’s another deadly three-point shooter.

“You’re talking about scoring options at all three of those positions on the floor."

(Beyer also mentioned another variation of the play that utilized Lewis as the screener called the “Thumb Up Spread,” literally signaled by a thumb up.)

Typically, the major drawback that comes with playing these offensively-slanted lineups comes at the defensive end, as more offense usually means less defense. But this iteration of the Magic defied the laws of statistics, touting the No. 1 defense in the NBA in 2009.

The keystone to this formidable front was, of course, Howard.

“[You’d] be hard-pressed to find a rim-protector and [overall] defender — on-ball and off-ball — like Dwight,” Ajami stated.

And despite his slender frame causing some issues against "classical" power forwards (see: 2009 Finals), Lewis compensated for his deficiencies by leveraging his great length and sound hands (87th percentile steal rate in 2009, per Cleaning the Glass) to create chaos on and off the ball.

“Both Rashard and Hedo TürkoÄŸlu were so long,” Beyer said. “They were very intelligent [and used] their length to defend guys. They were active with their hands. Their closeouts were appropriate — based on who they were guarding. And, if they were to get beat, they still had confidence that the next play could be made by Dwight to clean it up.”

For reference, that is a higher NET number than what the trio of Jrue Holiday, Khris Middleton and Giannis Antetokounmpo posted during their championship season with the Milwaukee Bucks.

“Nobody would have ever guessed that we would have been as successful as we were,” Ajami smiled. “But we were right there.

“That group of guys was extremely special.”

In a feature article from 2020, The Athletic's Josh Robbins credited two factors for Van Gundy’s decision to start Lewis at the 4: “Necessity and smart thinking.”

For some context, the Magic initially planned to start traditional power forward Tony Battie. But when he was ruled out for the entirety of the 2007-08 campaign, Van Gundy decided to experiment with Lewis playing the stretch 4 full-time.

However, dig into the weeds a little further, and one could posit that this innovation was more than happenstance, and that Van Gundy and Lewis had seen this before.

In 2008-09, Orlando’s three-point attempt rate (3PAr) had a frequency 11.1% higher than the league average. Let’s look at teams that posted a similar relative 3PAr that came before them: 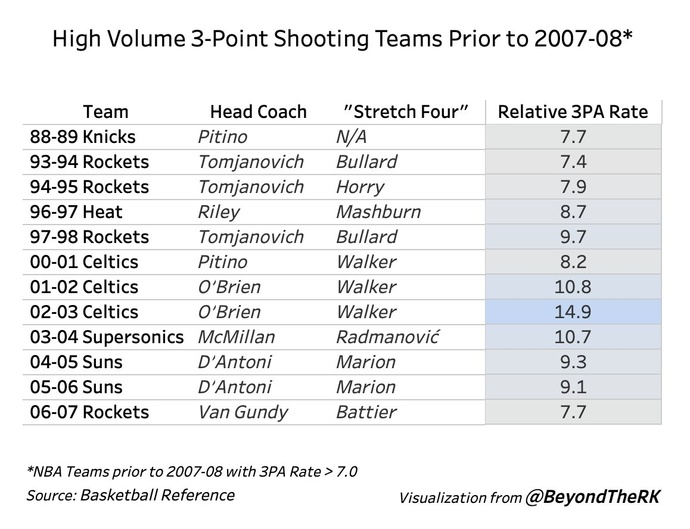 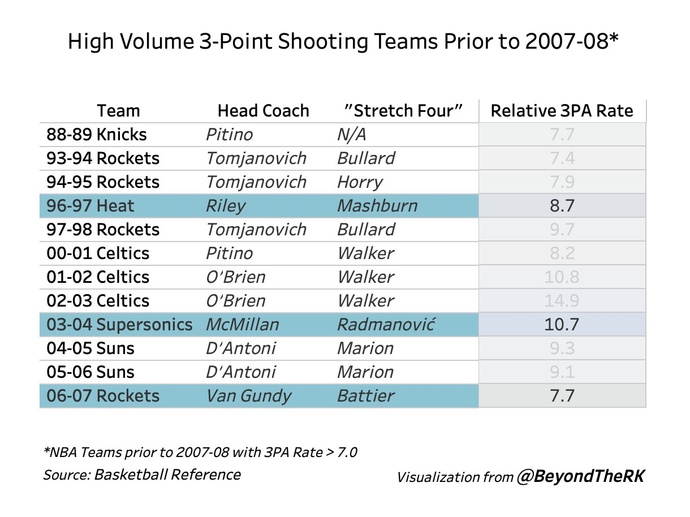 First are the 1996-97 Miami Heat, led by "The Godfather" Pat Riley. Who was his lead assistant during that time? None other than Stanley Alan Van Gundy.

Secondly, the 2003-04 Seattle SuperSonics. Before he landed in Orlando, Lewis had some practice slotting in at power forward under Sonics head coach Nate McMillan — spending 20% of his minutes that season at the 4 spot, per Basketball-Reference. Although, it is worth noting that Vladimir RadmanoviÄ‡ was Seattle's primary stretch 4 (playing 80% of his minutes at power forward).

And lastly, the 2006-07 Houston Rockets. It was the last pit stop for the legendary Jeff Van Gundy, Stan’s younger brother. Also featured on that team was Tracy McGrady — a player whom Lewis has publicly acknowledged he studied and modeled his game after.

“I don’t know if I would specify it that cleanly," Beyer said with a chuckle. "But I do know this: I know how much Stan values shooting, and I know how much Stan is always trying to come up with lineups where the best players are on the floor together. So, your theory makes a lot of sense to me.”

The point is that, whether it was an intentional decision, a freak coincidence, or a case of cryptomnesia, you can see that past experiences in Lewis and Van Gundy’s professional lives had them trending in this direction the entire time. And together, they made sweet music.

Unlike Steve Nash, finding direct descendants for Lewis is more of an arduous endeavor because, nowadays, seemingly everyone employs a stretch 4 to some degree. In this past season alone, 15 players listed as power forwards on Basketball-Reference surpassed 4.4 three-point attempts per game (Lewis’ career average).

Ajami stated that, because of the absence of positional constructs in modern-day basketball, he only thinks about positions as who you guard on defense.

“Basketball has almost become positionless,” Ajami said. “To me, you playing the 4 or 5 really just means who on the other team you're defending because, for us, our 4 and our 5... have got to be able to do the same things we ask our 2 and our 3 to do.”

In 2020-21, the Utah Jazz led the league with a relative 3PAr of plus-9.6. One could find a lot of parallels between their frontcourt of Joe Ingles, Bojan BogdanoviÄ‡ and Rudy Gobert and the one the Magic rode to the NBA Finals. (BogdanoviÄ‡ plays the role of Lewis in this analogy.)

Coming into the 2018 NBA Draft, some scouts viewed Michael Porter Jr. as a new-age version of Lewis. And when his back was right, Michael Malone would frequently run jumbo frontcourt lineups featuring MPJ, Aaron Gordon and Nikola Jokic. (Coincidentally, Malone’s father Brendan was an assistant coach on those Magic teams).

You can even see some influence from the Magic on this current iteration of the Cavaliers — three seven-footers in the frontcourt with Lauri Markkanen operating as their de facto Lewis.

Ironically enough, Lewis’ legacy has made his offensive archetype less unique than it was when he was playing (something we will see a lot in this series). None of the heirs to Lewis we listed have achieved All-Star status because the stretch 4 has become a staple feature on every team.

Nonetheless, Lewis and those Magic teams pushed the limits of what was once thought possible for the position — the hallmark feature of any basketball pioneer.

And for his overarching impact on the game, Lewis deserves his respect, his All-Star nominations and, most of all, his own chapter in the history of the NBA. 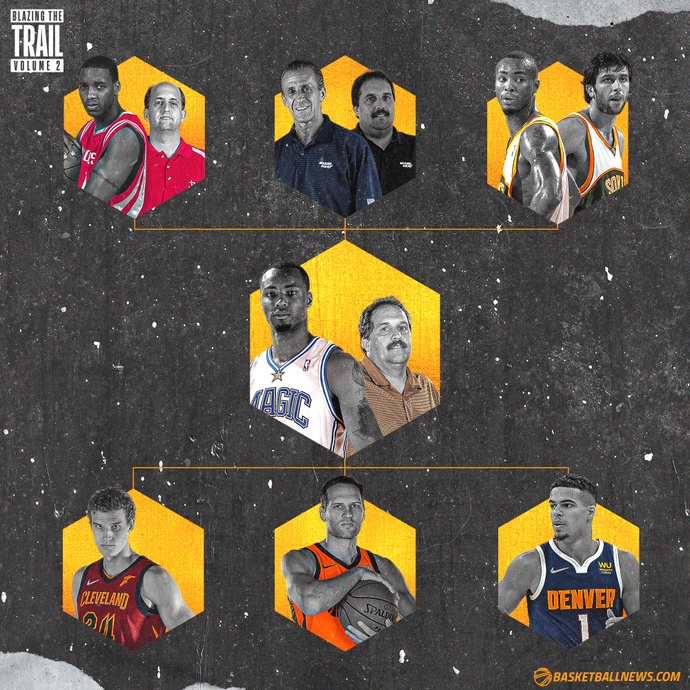 Tune in next week for Part III of Blazing the Trail, which focuses on Shane Battier — the data-ball defender.

Click here to read Part I: "Steve Nash, the magician who danced in the paint."