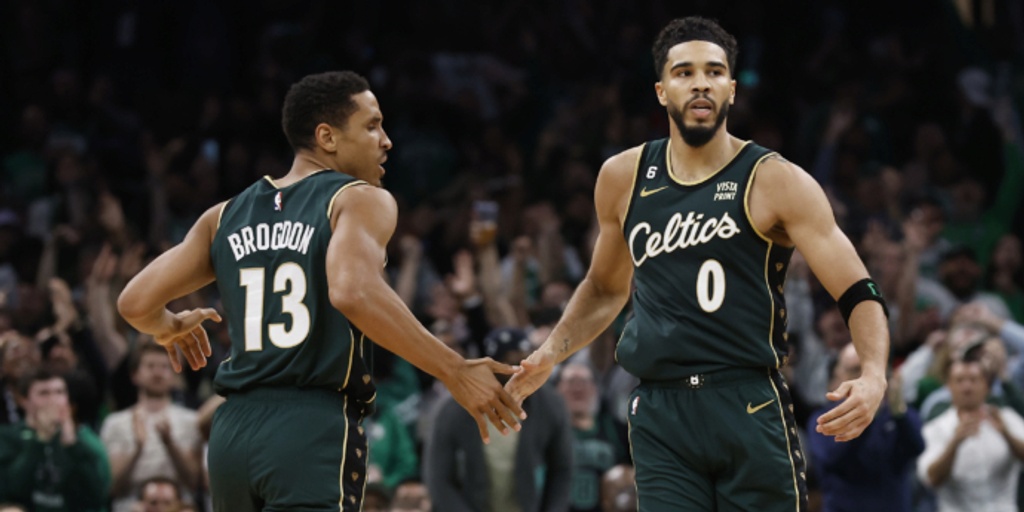 5 things we learned from Celtics vs. 76ers on NBA opening night

The Boston Celtics and Philadelphia 76ers opened the NBA season Tuesday night with a classic showdown of Eastern Conference strongholds.

Though the Celtics defended home court with a 126-117 win, most of the contest was a back-and-forth chess match led by dynamic duos. Jayson Tatum and Jaylen Brown each scored 35 points in the victory, while James Harden also dropped 35 and Joel Embiid finished with 26.

Opening night always sets a baseline for teams to build from, and yesterday's matchup gave us several answers — and some more questions — about these title contenders going forward. Here are five key takeaways from the clash:

1. The Celtics' bench made a statement.

Boston's move to get the franchise over the championship hump was trading for dynamic driver Malcolm Brogdon. When I reacted to the addition this summer, I stressed that an actualized Brogdon can change the topography of this offense from a unit that sometimes trudged upward into a downhill, attacking team.

After one game, Brogdon is achieving that mission. The combo guard was almost a guaranteed paint touch whenever he started with the ball. He finished with 16 points and shot 7-for-11 from the floor. Brogdon had a straight-line drive from the corner that stymied Harden and ended with an easy layup. He blew by De'Anthony Melton for another score, and also dug into his bag a bit against Tyrese Maxey (shown above). Brogdon shined in his role and inspired some tremendous optimism.

He wasn't alone. After not reaching an agreement on a contract extension in the offseason, Grant Williams balled out to the tune of 15 points on 5-for-5 shooting last night. He drilled three triples, including some difficult makes, and continues to improve off the bounce.

Noah Vonleh had six screen assists in just over 20 minutes last night — one less than Joel Embiid, who played over 37 minutes.

6.0 per game won’t last, but for context, that would have ranked 2nd in the NBA last season.

Noah Vonleh might have been the biggest eyebrow-raiser for his screening prowess and physicality against Joel Embiid. The Massachusetts native helped free up Boston's playmakers, and on defense, put in an admirable effort against one of the best players in the world. Vonleh outplayed Blake Griffin in the contest, and appears to have locked down the backup center spot behind Al Horford. He wasn't perfect, but he played a valiant game that sets a solid foundation for the second unit.

Amidst the rising crop of young guards and Harden's rocky road over the last two seasons, we (myself included) might have forgotten just how dominant he is as an orchestrator. The 33-year-old was in full control during the first half last night, and even as the game slipped away, he still showed just how hard it is to defend a player with his set of tools.

This is a miss but here was a big challenge moment for Boston. They're going over on ball screens for Harden and playing the big in drop. But they can't give Harden or Embiid that type of space in front of them, so it takes a third guy (Smart) to help, opening up the weak corner pic.twitter.com/VNvaV4Qx4d

When Harden used a ball-screen, the Celtics would send their guards over to cover a pull-up jumper and keep their screener defender in drop coverage. The challenge, particularly against Harden and Embiid, is that both of them have the touch to hit mid-range jumpers and floaters. It forces a third defender to "tag" Embiid emphatically so that the defending big man can keep them both in range. But as the above clip shows, that leaves a shooter open — and the Beard sees all.

Harden had a couple of passes like these that went unrewarded. He also hit Embiid for rolling baskets and knocked down a lefty floater with the space he received. It's still a mind-bending puzzle to solve a Harden pick-and-roll.

3. Boston has a defensive game plan for Joel Embiid.

It took some work for Embiid to get his 26 points. The all-world center shot 8-for-12 inside the arc, but it was some of the shots he didn't take, plus his six turnovers, that told more of the story.

Boston sent a double-team at Embiid whenever he was posting up in an empty corner. It began with the opening play (more on that later) but also included more tactical moments. Here, Tatum is the man to come double. Brogdon gets to stay guarding the outlet pass — an easy job because Harden barely moves off the ball. Tatum also waits until Embiid turns into a move on the baseline; that makes life easier for Brown and Marcus Smart, because those passes to the weak side become incredibly difficult.

Vonleh wears the first bump from Embiid and he has nowhere to go, leading to a turnover. The Celtics definitely built their game plan around Embiid's isolations, but they didn't let him frazzle their own spacing. That discipline over a full game is something interim head coach Joe Mazzulla can hang his hat on.

4. Philadelphia has to fix its offensive flow — and its transition defense.

However, these plays weren't just about Boston's defense. The Sixers had several seriously concerning moments with their offensive tempo. I'll defer to Nekias Duncan, who dissected two plays in detail that summed up the frustrations:

Meanwhile, the most cringeworthy team stat for Philly was their 24-2 deficit on fast break points. I mean, they hemorrhaged transition buckets. Boston averaged 169.2 points per 100 transition plays; per Cleaning the Glass, that would have led the NBA by 35 points last season.

Here are three Tatum transition scores that were a product of low effort from Harden specifically. I understand that transition play is naturally tilted toward offenses, and that the take foul is gone from the NBA. Still, there has to be a better fight in some of these instances.

5. Jayson Tatum may have fully arrived.

Speaking of Tatum, we have to highlight the best performance of the night. The 24-year-old superstar was a monster last night on both sides of the floor. He made 13 of 20 field goals, ranging from pushing the pace in transition to some unreal, contested makes — all while seeming perfectly in control. He was one of the most successful individual defenders against Harden and also made timely off-ball adjustments within Boston's scheme.

So the game starts to turn here. Jayson Tatum recognizes that Tucker wants to stay with him and Embiid is playing super conservative, so he screens both. That effectively makes this a PnR with no Philly big defender. Harden helps off the strong side and Horford makes the 3 pic.twitter.com/hZIirZNak0

Even plays like this that won't show up on the box score were driven by Tatum. He showed such a full command of the offense, yet this didn't feel like a game where he was overly ball-dominant. Tatum has typically started seasons slowly, so this type of first-game outburst already has Celtics fans elated.