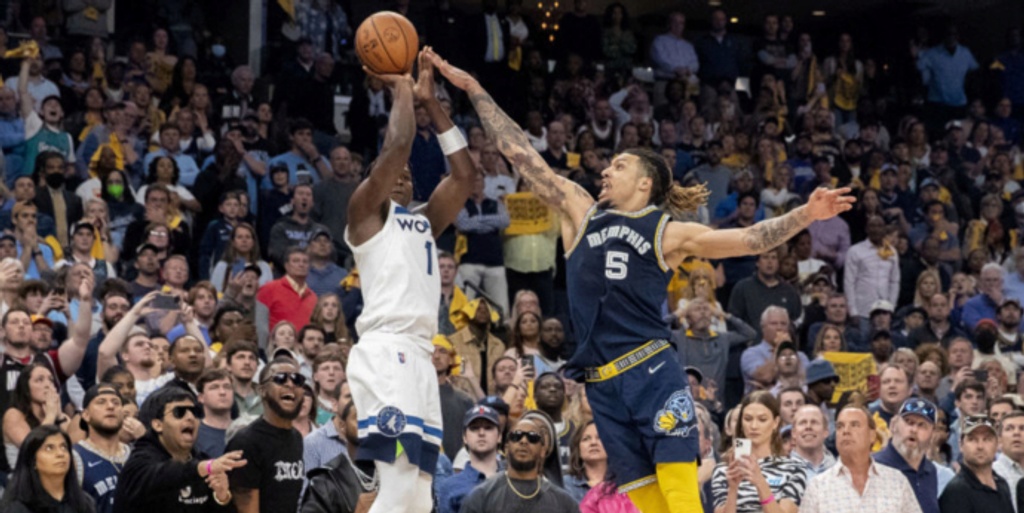 A perfectly orchestrated out-of-bounds set is a thing of beauty.

Plays ran after timeouts, or ATOs as they're commonly referred to, are by far the most intricately designed sets in any NBA game.

We hear the phrase "read and react" quite frequently, but that's truly the best way to describe the typical flow of NBA offenses. Possessions in the half-court without any sort of stoppage regularly feature some sort of pick-and-roll or handoff action, maybe with 1-to-2 additional tinkerings depending on the team you're watching. But the point is: There is a great deal of freelancing going on out there. These guys are pros for a reason — they don't need a guy in a suit telling them exactly what to do for every second of the game.

ATOs, however, are quite different. They allow head coaches to step in, sit down with their players for a full minute and 15 seconds, precisely rehearse and recall a scripted action from practice, and, most of all, tactically prey on the weaknesses of an opponent.

And when they're executed well? Sheesh, there's truly nothing better.

Now, just for size, imagine watching two back-to-back successful ATOs in the final eight seconds of a playoff game. That'd be crazy, right? Huh?! For all my play-by-play geeks out there?

Alas, that is what happened during Tuesday's Game 5 between the Minnesota Timberwolves and the Memphis Grizzlies.

Let's set the stage a little bit: This contest was not a gorgeous showing of pristine execution. It was a back-and-forth, frenetic affair, with both teams streaking up-and-down the floor like the Gatorade coolers had been spiked with C4 pre-workout. All of that speed didn't necessarily equate to production; collectively, both teams turned the ball over a ghastly 39 total times, and Memphis couldn't hit the broad side of a barn from deep at just 25.0% (7 of 28).

Minnesota controlled the tempo for most of Tuesday's game, building a lead as large as 13 in the second half. The Grizzlies looked dead in the water on their home floor, unable to get much of anything going in the halfcourt. Then, Ja Morant did this, and the mood completely changed...

A jaw-dropping dunk….a clutch late 3….a game-winning shot. Ja Morant did it all in game 5, leading the Grizzlies to victory over the Timberwolves to take the 3-2 series lead. pic.twitter.com/pKbwxriEws

(Seriously, it's tough to get enough of this freakin' dunk. BBN's Mark Schindler even wrote an entire article on it! I mean, what the actual HECK, Temetrius Jamel Morant.)

That audacious poster lit something inside of Morant, who went on an absolute tear in the final period of the game, eventually boosting his fourth-quarter point total to 16 after a pair of free throws. This put Memphis up by 3 with just eight seconds remaining.

With the first-round series hanging in the balance at 2-2, Minnesota needed a three-pointer more than ever to even things up at 109 apiece. And gosh darn it, Wolves head coach Chris Finch delivered.

Minnesota sets things up with Jordan McLaughlin inbounding, its two strongest offensive players — Karl-Anthony Towns and Anthony Edwards —on the strong side of the floor and D'Angelo Russell and Jaden McDaniels on the weak side. 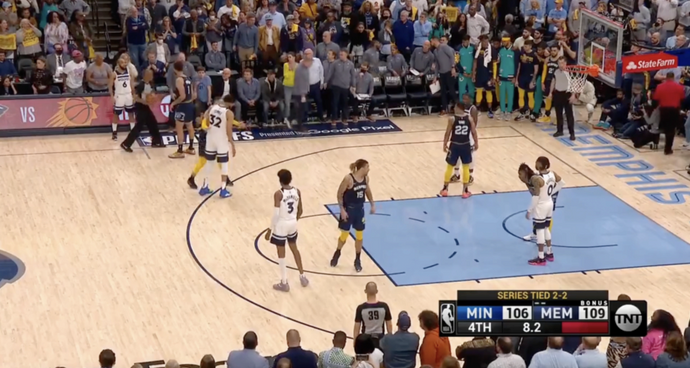 McLaughlin inbounds the ball to Towns at the left slot to initiate things. All the while, McDaniels streaks toward the left dunker spot and Russell brushes a backscreen for McDaniels. Then, Russell proceeds to "ghost" or fake a secondary back-screen for Edwards cutting up from the low block to the right slot.

Here's a video of that specific action involving that trio of players:

In the end, it was a simple exchange of positioning; McDaniels had replaced Russell in the right dunker spot, Edwards had taken McDaniels' place as the lifted shooter on the weak side of the floor, and Russell was now in Edwards' spot on the strong side. But most importantly, Brandon Clarke, the largest Grizzly available, was now tasked with manning rim-protection duties as the "low man."

Now, let's zoom out a bit. Minnesota inbounds the ball to its most dangerous offensive player, Towns, who at this point has scored a team-high 28 points on the night. Yet as the inbounder, it's McLaughlin who is technically the most dangerous player on the floor, and so Towns immediately returns the rock to give the zippy backup a running start. As such, McLaughlin gains a step on his defender, Kyle Anderson, and this causes Clarke to hesitate for a second, unsure if he's supposed to protect the rim or track the weak-side shooters.

Because Clarke decides to hold his ground in the paint, Morant then becomes responsible for "zoning up" and guarding the two weak-side offensive players, Edwards and McDaniels. So, Edwards drifts down to the baseline for deep positioning to create a brutally tough angle of recovery, and McDaniels sets a back-screen on Edwards' man (Morant).

This specific screening setup is known as "exit" action, where one offensive player pins the "zoned-up" defender with a screen to generate a corner three for his teammate. (Finch loves his exit-screen plays, I tell ya.) 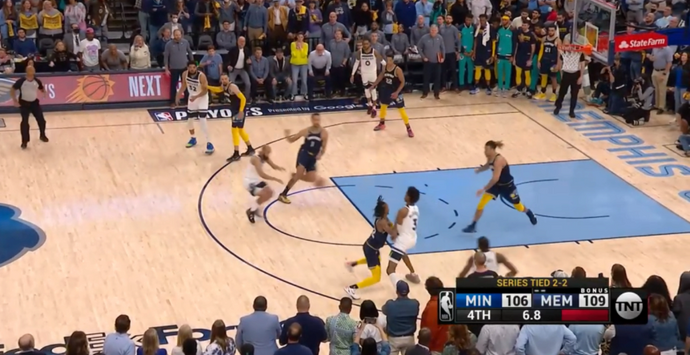 McLaughlin flicks a ridiculous bounce pass to the corner like he's skipping rocks across a pond, and Edwards—quietly shooting ~42% on catch-and-shoot threes in the regular season and postseason—nails the corner jumper over an excellent closeout from Clarke.

Which meant it was Taylor Jenkins' time to cook for the Grizzlies' response.

Unlike Minnesota, Memphis set up by overloading one side of the floor with Desmond Bane, Anderson and Morant all sharing the strong side, and Tyus Jones on the weak side. 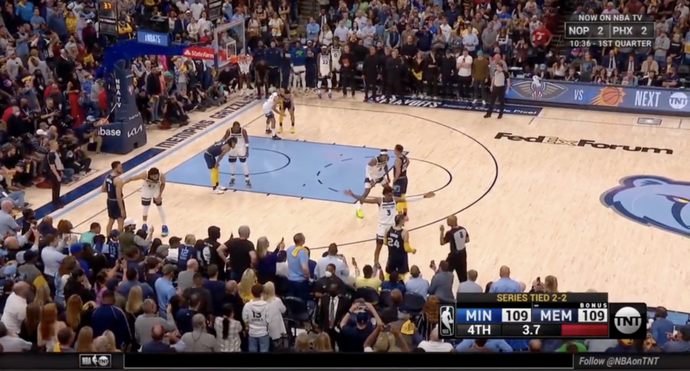 Morant sets a cross-screen for Jones to cut across the paint, only to have Ja then come off a pindown screen from Desmond Bane. This specific action is known as "screen the screener," in which a player (Morant here) sets a screen for one teammate (Jones) and then receives a screen from another (Bane). Meanwhile, Anderson cuts across the paint from the left corner to the right slot to drag Minnesota's only rim-protector, Towns, completely out of the play.

Memphis' screen-the-screener setup, or STS, forces Morant's defender (Edwards) to navigate not one, but two off-ball screens while tracking the hottest player on the floor. Edwards falls slightly behind the lightning-quick Morant, and exasperates things by gambling for the steal. Ant giveth, Ant taketh.

Now, Morant has the advantage with a free lane to the rim and Clarke in the right dunker spot. Jarred Vanderbilt rotates over to the stop the drive, and Towns inexplicably (??) turns his body away from the ball instead of rotating down to Clarke. This effectively leaves Vanderbilt in no man's land, forced to defend perhaps the best downhill dude in the league and a premier lob-threat... and, well, you know the rest.

And sure, the night was dominated by the highlights (again, whew, that dunk), but it's sequences like the final eight seconds that make this NBA game what it is — great.