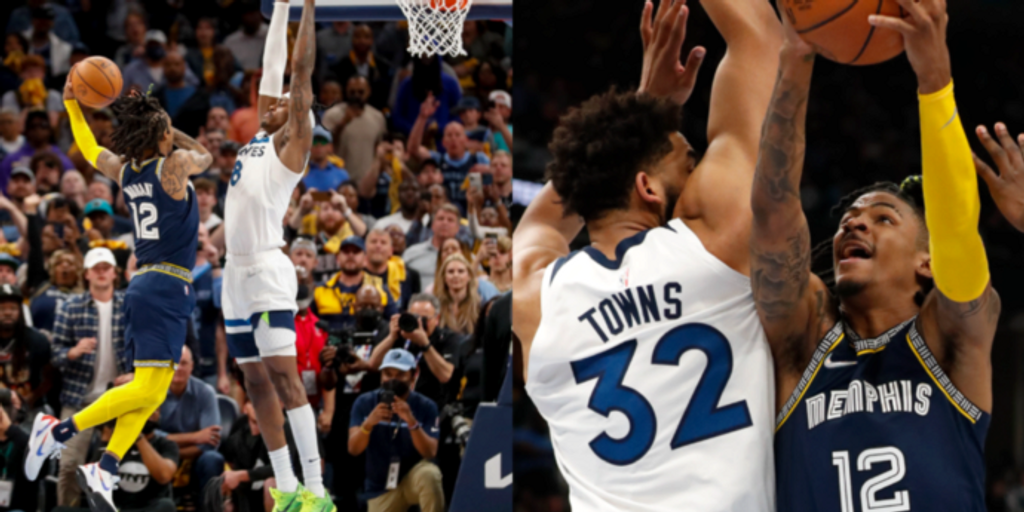 During the regular season, Ja Morant was one of the league’s most prolific and productive downhill adventurers.

He averaged 20.9 drives per game (third-most in the NBA) and shot 51.0% on those drives. Despite playing just 57 games, his 828 points resutling from drives led all players.

Once he mounted a head of steam, containing his powerful acrobatics was an incredibly arduous task for defenses. That prowess fueled Morant's scoring leap, as he averaged 27.4 points on 57.5% True Shooting en route to winning the Most Improved Player award.

Yet from Games 2-4 in the Memphis Grizzlies’ first-round series against the Minnesota Timberwolves, Morant’s profits attacking the rim dried up, which subsequently hampered his overall scoring numbers.

During that span, Morant thrived as a playmaker, delivering 35 assists to 11 turnovers and amplifying the divergent off-ball scoring chops of Brandon Clarke and Desmond Bane. But Minnesota’s tactic had clearly flustered his individual success.

In those games, Morant averaged just 16.7 points on 45.9% TS and shot 38.7% on 62 drives. After 20 free-throw attempts in Game 1, he had just 17 total over the ensuing three outings. Halfway through Game 5, Morant had 6 points and 7 dimes (although, an uncharacteristic 2 of 7 showing at the line helped stymie him as well). Another pass-heavy approach was percolating.

With the Timberwolves loading help in the paint and at the nail, Morant’s passing grew in importance, and his scoring suffered. They sagged off Memphis’ cast of generally timid, unthreatening floor-spacers, and directed focus to the star guard in front of them.

On most of his drives, a defender confronted Morant at the nail as three, sometimes four, bodies awaited him near the rim. Stunts from the strong side (usually a no-go for defenses) were commonplace. His once-dynamic finishing was better classified as erratic.

The Grizzlies ranked just 28th in three-point rate (.346) and 17th in percentage (35.3%) in the regular season. So, Minnesota dared them to convert beyond the arc and refused to offer Morant runways for his trampoline-bounce to shine.

Pause those clips above. Process the positioning of Minnesota’s help defenders and how much room Memphis’ shooters are granted. On the final play, both Anthony Edwards and Jarred Vanderbilt tag the roller, likely in case Morant wiggles around Karl-Anthony Towns’ hedge and explodes to the hoop. That’s a whole lot of attention on one dude.

To Memphis’ and Morant’s credit, Game 5 was full of experimentation to open driving lanes for him. Whether he initiated offense from different spots (top of the key vs. the wings), he began possessions off the ball to operate as a screener/second-creator or the floor-spacing was rearranged, everyone involved worked to find him some breathing room.

In the second half, those efforts were rewarded and the dam broke, particularly amid Memphis’ fourth-quarter, 13-point comeback. Morant scored 24 points after intermission, including 16 over the final seven minutes, when the Grizzlies closed with Morant, Bane, Clarke, Tyus Jones and Dillon Brooks once Jaren Jackson Jr. fouled out.

That lineup didn’t record a single minute together in the regular season and debuted for two minutes in Game 4. By surrounding Morant with four ball-handling/play-finishing threats, Memphis provided him with more space and complicated Minnesota’s "contain Ja at all costs" approach.

When bigs like Jackson or Xavier Tillman occupy the dunker spot, the Timberwolves are content helping off because neither is a particularly adept scorer around the basket. When Clarke is there, abandoning him to help on Morant is riskier, given Clarke’s premier finishing and Morant’s interior passing genes.

Minnesota has also routinely aimed to avoid involving Towns in ball-screens against Morant, which continued in the fourth quarter. That strategy gave Morant increased space as a driver and cleaner finishing angles over the top, while also forcing the Timberwolves’ defense into rotation more often.

Small-ball was not the Grizzlies’ only avenue to springing free Morant and their collective offense. They really emphasized emptying the wings to muddle Minnesota’s aggressive stunt-and-recovers. Rotating to the nail/elbows is much tougher when someone’s assignment is stationed in the corner.

They also utilized double ball-screens for Morant out of a Horns alignment. Doing so removed a big man from the dunker spot altogether, and empowered Ja to work off the ball rather than needing to spearhead every action. Without help looming around every ball-screen, the third-year guard slalomed into the paint and gained traction to bring his squad a crucial Game 5 victory.

By night’s end, Memphis was plus-14 with the Morant-Jones-Bane-Brooks-Clarke quintet on the court. Morant scored 16 of its 21 points, headlined by a 9 of 10 performance at the free-throw line in the fourth.

Both in the half-court and transition, he repeatedly shimmied downhill and scored or drew fouls. His driving acumen also repopulated. Across his 45 minutes, he tallied 31 drives, shooting 50.0% (7 of 14) on them, taking 10 free throws and scoring 19 points. His pair of assists post-halftime were also emblematic of renewed scoring comfort.

Aside from Game 2, Memphis and Minnesota have been tangled in close battle after close battle. Morant’s struggled in certain aspects throughout these contests and amended his approach to still fashion positive contributions. On Tuesday, though, the team amended its approach to unlock the effervescent 22-year-old.

Now, the Grizzlies sit one win away from their first playoff series victory since 2014-15, with their franchise star guiding them and enjoying his finest stretch of postseason basketball this year.