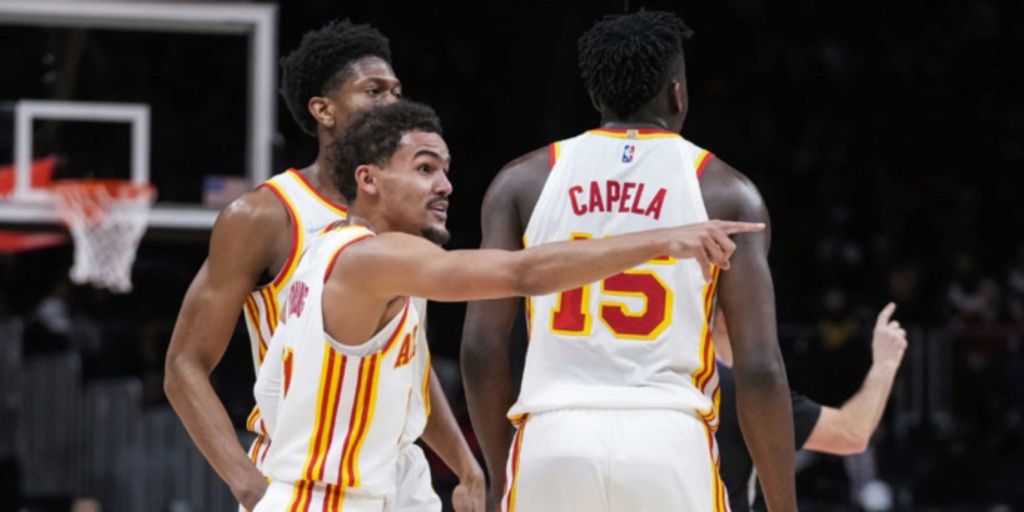 The Atlanta Hawks fought hard just to make the playoffs.

They battled to the very last second against the top-seeded team in the East.

But in the end, there's only one word to describe this season.

Coming off a surprising run to the Eastern Conference final in the summer of 2021, the Hawks entered this season thinking of themselves as a potential championship contender.

Instead, they took a big step backward, spending much of the year under .500 before a late surge got them into the play-in tournament with the ninth-best record in the conference.

The Hawks won two straight in the tournament — including a road victory at Cleveland — to take the No. 8 playoff seed, but they were no match for the Miami Heat in the opening round of the playoffs.

Atlanta lasted only five games, finished off by a 97-94 defeat Tuesday night.

It really wasn't a surprising result, given the Hawks lack of consistency during the regular season.

There were some obvious culprits — a rash of injuries, not to mention a COVID-19 outbreak that forced the team to essentially rely on a G-League roster just to take the court — but there were also mysterious lapses in effort that no one could put a finger on.

“We have to play better during the regular season to put ourselves in a better ranking, a better position to approach the playoffs,” Danilo Gallinari said. “We let a lot of games go. We had too many ups and down during the season. When it's playoff time, you can't take games off, minutes off. You've got to play every game the same way.”

From a summer filled with hope, the Hawks head into an offseason that looks much more tumultuous.

“It was a tough season. This was not a good result,” Gallinari said. “Where do we go from here? I have no idea.”

When the Hawks were struggling at the trade deadline, general manager Travis Schlenk passed on the chance for a major overhaul. The only deal he made was sending Cam Reddish to the New York Knicks for little-used Kevin Knox and a protected first-round ick.

Now that he's seen his team's body of work over an entire season, Schlenk will likely go for much bigger changes this offseason. After all the optimism generated by the 2021 postseason run, it seems clear the current roster isn't capable of competing for a championship.

John Collins, just one year into a five-year, $125 million contract, has been mentioned frequently as potential trade fodder.

After becoming just the second player in NBA history to lead the league in total points and assists, Trae Young endured a miserable playoff series against the Heat.

Miami limited Young to just 15.4 points per game, twice holding him to single digits. He shot just 32% from the field (22 of 69) and had as many turnovers as assists (30 apiece).

Young and the Hawks must figure out a way to get him more involved away from the ball and come up with ways to produce offense when the other team is intent on shutting down Atlanta's best player.

“This is part of my growth,” the 23-year-old Young said. “The next time I face this sort of challenge, I'm gonna be better.”

With no one on the current roster who seems capable of taking the scoring load off Young on a consistent basis, the Hawks may look to bring in another top-level player to complement their young star.

The Hawks have an abundance of role players, but no really elite player beyond Young. There were far too many nights when they looked like a one-man team.

This summer, the Hawks must decide what sort of commitment to make to De'Andre Hunter, who closed the season with a career-best 35 points in the Game 5 loss to the Heat.

The Hawks love Hunter's defense and believe he can become more of a force offensively, but he's battled injuries and inconsistency over his first three seasons in the league.

Now, he's eligible for a rookie extension worth up to $184 million over five years.

The Hawks already have big money tied up in players who struggled to meet expectations this season, including Collins, Gallinari, Bogdan Bogdanovic, Clint Capela and Kevin Huerter.

The Hawks will be looking for ways to get Onyeka Okongwu a bigger role.

Only 21, the undersized center missed the first part of the season recovering from shoulder surgery but played well as his minutes increased down the stretch.

He'll spend this offseason looking for ways to expand his offensive repertoire.