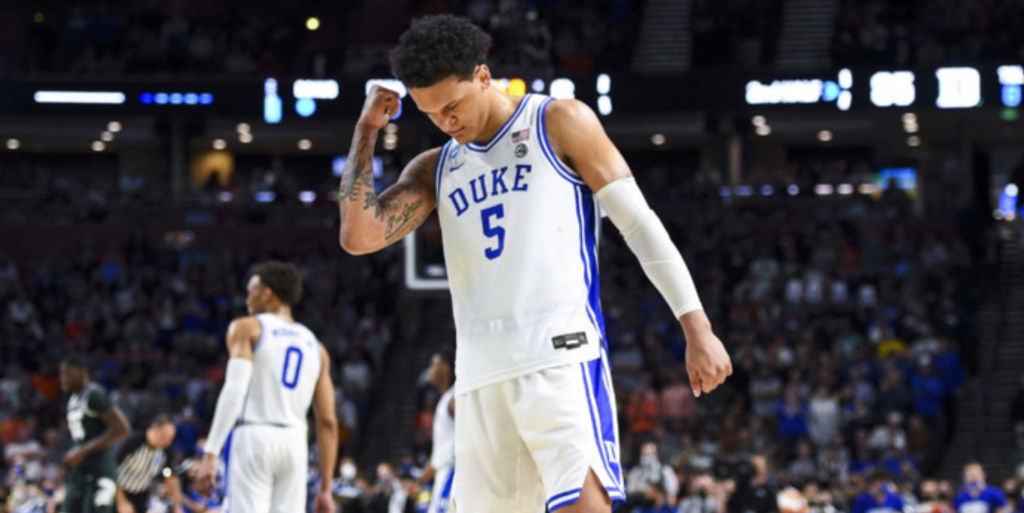 March Madness: 2022 NBA Draft prospects to watch for in the Final Four

The Final Four is upon us. Although only four teams remain from the Field of 68, there are numerous prospects set to take the floor this weekend.

Our Sr. NBA Draft Analyst Matt Babcock has been scouting these players for years, so I had him break down the 2022 NBA Draft prospects to watch in the Final Four. This list only includes prospects who are expected to enter this year’s draft and are currently included on BasketballNews.com's 2022 NBA Draft Big Board.

AJ Griffin is 6-foot-6 and possesses a 7-foot wingspan. He is a powerful and versatile wing with a tremendous physical profile and promising skill set. Griffin has also shown the ability to create for both himself and others. After missing the early part of this season due to injury, he has solidified himself as one of the best shooters in the country. AJ is the son of former NBA player and current Toronto Raptors assistant coach Adrian Griffin, and he has made a case for himself to become a top-10 pick.

Ochai Agbaji is a versatile wing who has shown promise as a defender, slasher, and shooter. Early in his career, he was known for his athleticism and defense. However, this season, he has emerged as one of the best shooters in America, making giant leaps as a scorer in both volume and efficiency. Agbaji has solidified himself as a viable 3-and-D option at the NBA level and was one of the best players in the entire country.

Mark Williams is one of the best shot-blockers and inside scorers in the country. Utilizing his size, length and interior presence, Williams shows flashes of dominance on both ends. This season, he has been solid for Mike Krzyzewski and the Duke Blue Devils, which could lead to him being a first-round pick in the 2022 NBA Draft.

Moore is having a breakout season, finally coming into his own during his junior year. At 6-foot-5, he has good positional size, strength and athleticism at guard. While Moore remains streaky as a three-point shooter, he has proven to be a reliable three-level scorer this year for the Blue Devils. He will still be 20 years old on draft night with more room to develop, making him a solid option this June.

A physical and slashing guard capable of shooting the ball from outside, Trevor Keels came to Duke after being a consensus five-star high school recruit. His physicality and natural ability to score the ball should generate interest from NBA teams. Although he can be streaky as a shooter, he has a beautiful release and has proven to be a tough shot-maker. With positional size and a knack for scoring, Keels is one to follow.

At 6-foot-6, Braun has positional size and has shown the ability to score from anywhere on the floor. He has a smooth release from three and can pick his spots off the dribble. He is reliable on and off the ball on offense, while providing intelligent defense on the other end. Braun is a well-rounded player and makes a strong case for the 2022 NBA Draft.

After being a highly-touted recruit out of high school, Caleb Love had a somewhat underwhelming freshman season for the North Carolina Tar Heels. However, this season, he is scoring well from deep and the free-throw line, promising a scoring punch at the next level. Love is a solid athlete with a quick first step and a knack for playmaking, and has taken a step forward this season. Love could be a viable option in the 2022 NBA Draft if he can continue trending in the right direction.

Collin Gillespie will enter the 2022 NBA Draft as one of the more accomplished college players in the class. He already has three Big East Championships and a national championship on his resume, and he'll look to duplicate that success at the NBA level. At 6-foot-3, he is intelligent on and off the ball, and is a reliable scorer at multiple levels. He's also disciplined and instinctual on defense, providing real value on both ends of the floor. Gillespie has the tools to be a backup point guard at the next level, so it will be interesting to track if an organization gives him that opportunity.

The Final Four will take place this weekend in New Orleans, LA.