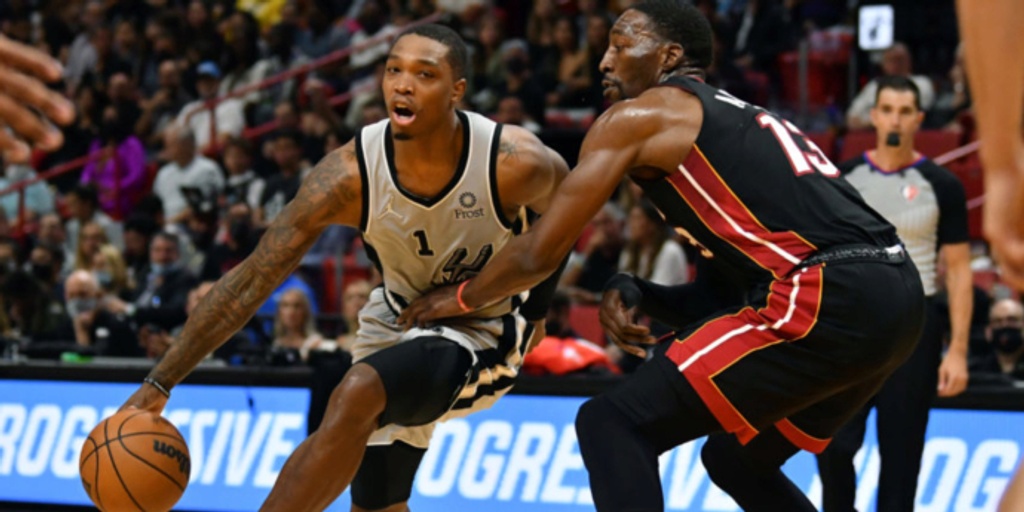 You know who's having a weird year? The San Antonio Spurs.

Consider this: They're currently 14 games under .500, yet have a Net Rating that is positive (plus-0.2) and higher than five teams currently in the Play-In (Brooklyn, Charlotte, Los Angeles x2, New Orleans).

You can blame that weird discrepancy on their late-game woes. Their 9-19 record (.321 win percentage) is the second worst in the league; they have the worst clutch offense in basketball (92.1 ORTG), and their average defense (106.9 DRTG, 15th) is offset by being the worst team — by far — at ending possessions (57.9% defensive-rebound rate).

(San Antonio's clutch offense was 15 points per 100 possessions better last season; one might say having a closer like DeMar DeRozan can be helpful.)

But here the Spurs are, just 1.5 games out of the final Play-In spot. They have an All-Star in Dejounte Murray, a massively underrated interior force in Jakob Poeltl (don't let Ja Morant spoil this for you) and a whole lot of athleticism around them.

Quietly on the rise is Lonnie Walker IV, a ridiculous athlete who has both fallen down the young prospect hierarchy, and has been prone to inconsistency throughout his career. (Murray, Devin Vassell, Keldon Johnson, Poeltl and rookie Josh Primo seem more valuable/important to the team moving forward.)

At different points of his career, we've seen transition brilliance. A silky spot-up jumper. Unique passing flashes. Aggressive drives. A slick-enough handle to get into an array of pull-ups or stepbacks. Very, very, very rarely have seen Walker put these things together, but he's on a bit of a run right now.

He's averaging 20.3 points (.590/.382/.579 shooting splits, 59.0% True Shooting) off the bench over his past six games. His current streak of six games with 15 or more points is the longest of his career; heck, his longest streak of double-digit scoring games is eight, something he accomplished for the first time last season and has repeated earlier this year.

We can start with the easy stuff. Walker is a devastating transition weapon. He doesn't run — he glides. And he doesn't jump — he opts to activate his jetpack instead. He's generated a preposterous 1.46 points per possession in transition over his last six games, per the good folks at InStat.

I'm not sure what you're supposed to do with that.

In the half-court, Walker is doing most of his work in a secondary role. The Spurs design some looks to get him on the move — mostly pindowns and staggered screens — since he's a threat to knock down shots or immediately attack off the catch. He's much better attacking a tilted defense than he is creating against a set piece.

There has been some growing comfort in pick-and-roll with Walker. He's been trusted to attack with drag screens in semi-transition, and has been the second (or third) option in San Antonio's set pieces. He's finding pockets to pull-up when faced with drop coverage, a boring-yet-vital piece to the creation puzzle. His recent outing against the Memphis Grizzlies was a nice snapshot of his growth.

But even when he's playing off of Murray or others, he keeps light on his feet, constantly looking for space to fill. He roams around the perimeter to stay in a driver's line of sight; he's made 42.0% of his relocation threes during this stretch, per Second Spectrum tracking. Pay too much attention to the main action, and he'll cut to the rim for easy ones.

Walker is at his most dangerous when he gets downhill. His forays to the basket are up during this stretch, and he's converting nearly 67% of his shots via drives.

What I've enjoyed are the passing flashes. There isn't real manipulation at play right now, but that's fine. What he is doing, however, is leveraging his driving chops to make easy reads to others. The video comp below will mostly feature missed shots — that'll affect the assist rate, some of his pick-and-roll metrics, all that good stuff — but you'll see where things are starting to come together for him.

It probably isn't reasonable to expect Walker to be a 20-point guy the rest of the way. But the pathway to him being an effective option — transition buckets, attacking off screens, secondary ball-screens against drop coverage — is evident and realistic.

I'd keep an eye out for Walker moving forward. He didn't receive a contract extension before the season, setting him up to become a restricted free agent this summer... unless the Spurs — armed with the aforementioned guards, plus Romeo Langford (and Josh Richardson) — decide there's no room for him.

Walker is an interesting second-contract gamble that teams should be interested in making.