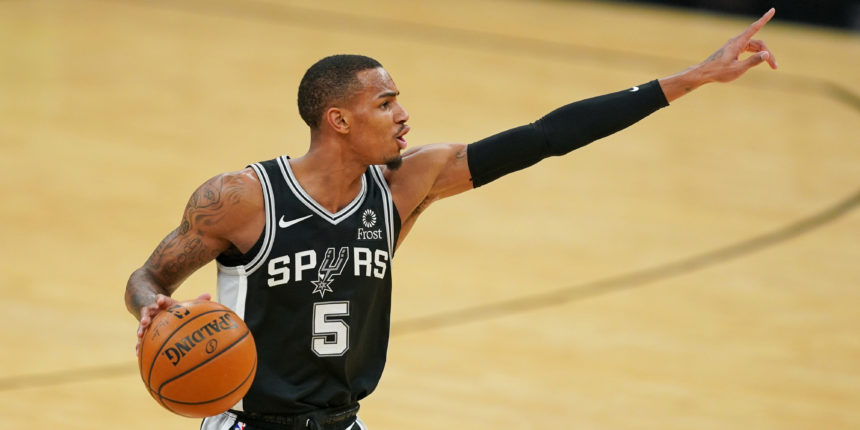 It's offseason time for 28 teams in the NBA, which means we're primed for the rumor mill to turn.

The class beneath that -- young impact players on their first or second contracts -- is always littered with interesting names. One that has surprisingly popped up is Spurs guard Dejounte Murray, an elite perimeter defender with a budding offensive game.

Zach Harper of The Athletic recently reported that Murray and teammate Derrick White could both be gettable. It's important to note that "could be gettable" is not equivalent to "actively being shopped", but still: the prospect of landing Murray is an exciting one.

It's hard to oversell his defensive capabilities. At 6'5 with a massive-for-his-position wingspan, Murray can swallow up opposing point guards while having the versatility to defend 2s and 3s in a pinch. His best ability is screen navigation; it's hard to generate contact on his slender frame, allowing him to stay attached to enemy ball-handlers.

The swing for Murray comes on the offensive end. While the three-point shot still isn't there for him, it was encouraging to see substantial growth inside the arc.

He maintained a mid-40s percentage clip in the mid-range area despite increasing his volume from last season. Per Synergy, Murray made 43 runners (at a 47% clip) after converting just 8-of-29 last season.

With Murray set to turn 25 a month or so before the 2021-22 campaign, and with more-than-reasonable money left on his contract (three years, roughly $50 million), it would take some major prying to pull Murray out of San Antonio.

Here are a few teams that should attempt to pull it off.

If ever there was a team that needed some help at the point of attack, it would be a Cavs team that currently starts a pair of talented but undersized guards.

The Cavs' 25th ranked defense last season deserves context. They got All-Defensive team caliber play out of Larry Nance Jr before getting hurt, and also got a high level early season stretch from Andre Drummond before shutting him down. Once the injuries piled up, the defense predictably slid.

At any rate, adding Murray to the mix would alleviate a ton of concerns on that end of the floor. His slashing ability would be a nice complement to the pull-up artistry of Darius Garland.

There's been enough chatter about the SexLand backcourt to lean into a potential split, sooner or later. Heck, we explored Sexton deals in this space not too long ago. Quietly, I think the Spurs could be a Sexton suitor.

His ability to shoot would be a welcomed addition to a squad that doesn't take threes in high volume. Sexton isn't a gunner from deep either, but would at least represent a sizeable bump from Murray. Behond that, his shot creation would either be a complement to, or a replacement of pending free agent DeMar DeRozan.

The Blazers may be sellers in their own right, depending on if -- or how far -- Lillard pushes the envelop. Even if he doesn't attempt to force his way out, it's clear the Blazers are sniffing around to bolster the defense around their star.

They're likely to go big game hunting first; surely they'll sniff around the Simmons situation in Philadelphia. If that doesn't pan out, why not turn their attention to Murray? He'd immediately become Portland's best perimeter stopper -- Robert Covington remains an All-World helper, but leaves a little to be desired as an on-ball defender -- while adding some rim volume to a team that could use some downhill juice, even under the assumption that Norman Powell will be re-signed.

If the Powell assumption is a fair one, maybe there could be a workable deal around a Murray-McCollum swap. The obvious caveat is that salary would need to be added from San Antonio's side, which could complicate things from a value standpoint.