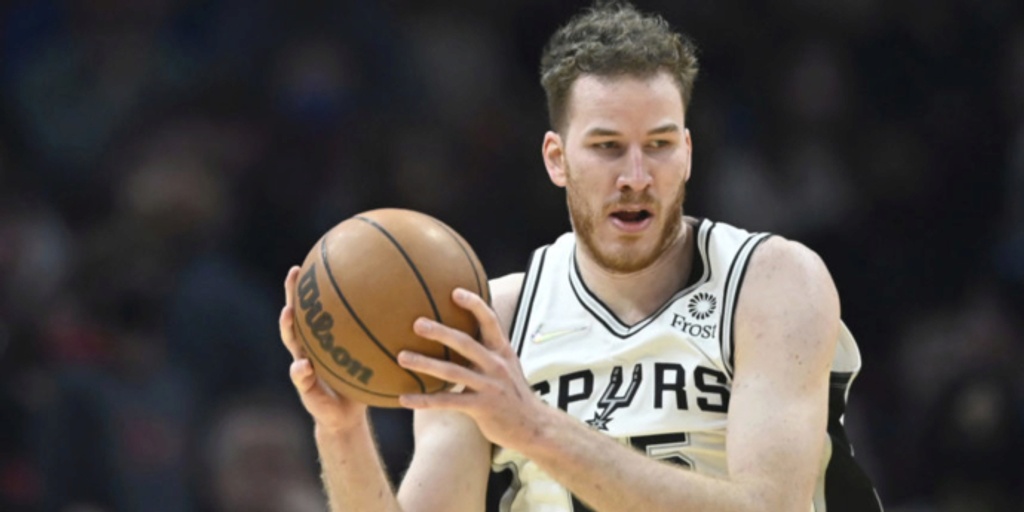 The San Antonio Spurs made their immediate intentions known as this year’s trade deadline when they sent Derrick White to the Boston Celtics for some notable future draft capital. White was a key cog in the Spurs’ puzzle, but the entire show revolves around the recent surge in development from Dejounte Murray. Becoming known for his stat-stuffing performances, Murray’s rise to All-Star-level player helps further contextualize where exactly the Spurs are along in their rebuilding process.

Hoping for lottery luck, San Antonio seems only one big foundational move away from taking a needed step up in the Western Conference. In the meantime, though, one player’s growth has added intrigue around the Spurs with Murray.

Once added to the Kawhi Leonard blockbuster trade with the Toronto Raptors alongside DeMar DeRozan, Jakob Poeltl has become a real reliably steady presence in San Antonio. This season, Poeltl is averaging 13.1 points, 9.2 rebounds, 2.8 assists and 1.8 blocks per game while carrying a 60.6% True Shooting percentage.

While Poeltl certainly won’t blow you away with an athletically-based profile, he does all the little things at such a high level. Whether it be delivering tone-setting screens, operating offense as a tertiary hub, well above-average rim-protection ability or efficient pick-and-roll scoring, Poeltl has a checkmark next to a lot of boxes for a functional big man in today’s NBA.

There’s no wonder why the Charlotte Hornets and Chicago Bulls reportedly put compelling trade offers on the table earlier this month for the Spurs’ well-rounded 7-footer. Poeltl offers a unique spin for what traditional bigs can offer — a high-floor, low-ceiling player, but one that’s necessary for successful teams. Being able to spread his wings further in San Antonio this season has brought more interest from the outside, but Poeltl seems like the ideal third or fourth-best player on a sustainable contender.

Poetl has played such an integral role in the Spurs staying afloat, and a competitive West team with a Play-In scenario still remains possible. Thanks to his gravity and efficiency brought within the pick-and-roll operation, San Antonio’s offense operates at elite levels with Poetl on the floor. The Spurs’ fun inside-out duo of Poeltl and Murray joins the Denver Nuggets (Nikola Jokic-Monte Morris) and Atlanta Hawks (Clint Capela-Trae Young) as the only point guard-center combinations to score at least 116 points per 100 possessions (minimum 1,000 minutes for two-man lineups).

Since Christmas, Poeltl is averaging 14.2 points, 9.8 rebounds, 2.9 assists, 2.0 blocks and 0.8 steals on 62.9% TS. A big enough sample size at 25 games exiting the All-Star break now, Poeltl stands out as one of the more intriguing players to follow over the next few months. While San Antonio figures not to be a contender, the next chapter of Spurs basketball is an intriguing thought with Murray, Poeltl and multiple other young prospects experiencing internal development.

An interesting scenario that could unfold is the Spurs exploring trade opportunities once more with Poetl this offseason. On one of the best bargain contracts in the league, Poetl would be able to fetch a nice return on investment via trade as a $9.4 million expiring deal. Whether it be as a starter or first sub off the bench, Poeltl’s winning attributes bring immediate impact.

Let’s say the Bulls actually nabbed Poeltl to pair with Nikola Vucevic at the deadline. Poeltl would provide Chicago another big body to throw against the likes of the Milwaukee Bucks, Miami Heat and Philadelphia 76ers. In postseason play, every possession becomes heightened. As a change-of-pace big, Poeltl holds value without any chance of a sinking cost.

If the Spurs jump in the lottery and are in position to land Gonzaga big man Chet Holmgren, ranked No. 3 overall on BasketballNews.com's 2022 NBA Draft Big Board, Poeltl could be redundant long-term. Whether it’s in San Antonio or elsewhere, Poeltl’s game has grown on me the more I’ve watched him closely taking in Spurs games. He’s not going to put together dominant flashes that shine all over SportsCenter highlights, but Poeltl is a consistently good player who allows the Spurs to bring together a pesky squad most nights. An anchor-setting presence on defense, coupled with inside scoring and playmaking chops in the short-roll, allows for endless possibilities.

With Poeltl, we’re now able to see how he could be utilized throughout his next contract set to pay up in 2023-24. While the ceiling might not be robust in possibilities, the floor is one that’s consistently strong enough to make a multi-pronged impact.

“He was a star,” Spurs head coach Gregg Popovich said of Poeltl’s recent 20-point, 17-rebound performance against the Oklahoma City Thunder. "I told him after the game you were a star tonight. We don’t win the game without what you did tonight. Without a doubt.”