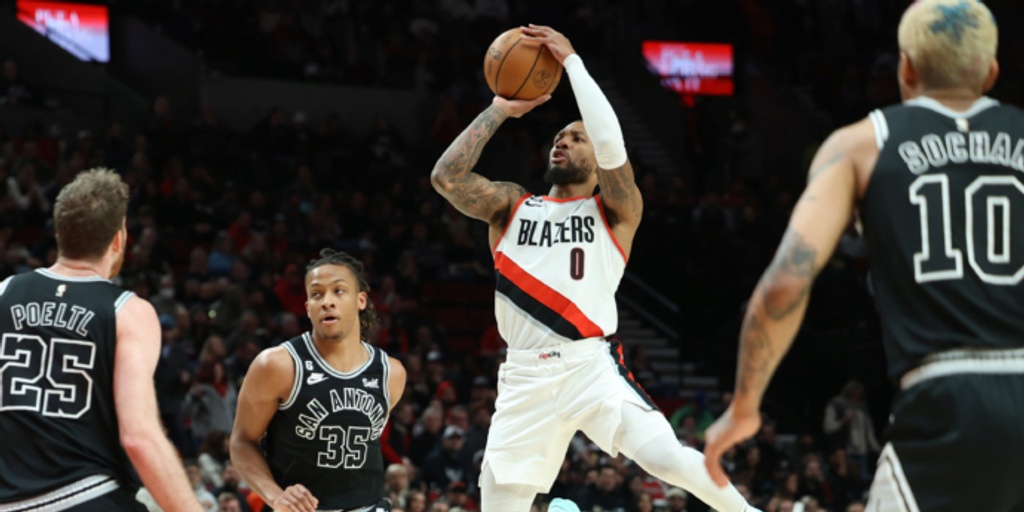 Jusuf Nurkic added 25 points and 11 rebounds for the struggling Blazers, who had lost eight of their previous 10 games.

Keldon Johnson scored 20 points for the Spurs, who have lost seven of their last eight games and sit second-to-last in the Western Conference standings, just above the Houston Rockets.

The high-scoring first half ended with the score knotted at 74. The Blazers started to pull away late in the third quarter, when Lillard hit a 3-pointer that gave them a 103-95 lead.

Rookie Shaedon Sharpe added a 3 and then dunked to give the Blazers a 108-97 lead. Lillard made another 3 from just inside Portland’s pinwheel logo at center court.

“We separated ourselves in that third quarter. We played the way we need to play for most of an NBA game, separated ourselves and then obviously finished the game. It was a great offensive game and a better defensive effort in the second half,” Lillard said. “Right now we can’t complain about how we get them. We won the game.”

Portland led by as many as 24 points in the fourth quarter to run away with the win.

The Blazers rebounded from a loss to the Lakers on Sunday night, when they blew a 25-point halftime lead for a 121-112 loss.

Portland coach Chauncey Billups spoke to the team before the game against the Spurs. While not revealing details of the chat, he said he used the quote: “Adversity has a way of introducing a man to himself.”

Afterward, he praised the team for bouncing back.

“What we did tonight is really, really hard to do. In my experience, just being around, losing a game like we lost last night, it usually has a lasting impact on you,” Billups said. “And I’m really proud of my guys for being able to put it aside and just move on and just worry about the Spurs. It’s really, really hard to do. I’m really proud of my dudes for being able to have the mental fortitude to do so.”

The Blazers led 40-38 lead after the first quarter. Tre Jones’ driving layup put the Spurs up 57-53. But Lillard was fouled on a 3-point attempt with just over a minute left before halftime and hit all of them, giving the Blazers a 72-67 lead.

“We’re scoring enough points, we’re not getting enough stops. A lot of credit goes to Damian tonight. He was great. He got the better of us, a great player. He’s who he is, and we couldn’t stop him,” Spurs coach Gregg Popovich said.

Spurs: It was the first of a three-game road trip. Next up are the Los Angeles teams. ... The Spurs had eight players in double figures. ... Jeremy Sochan finished with 18 points.

Trail Blazers: The Blazers won the first two meetings against the Spurs earlier this season. ... Portland is mostly healthy, with only Gary Payton II playing limited minutes. ... Anfernee Simons finished with 26 points. ... Portland’s record for most points in a game is 156.

Lillard had seven 3-pointers, moving him into seventh all-time in the league with 2,283.

Lillard now has 42 career games with 30 or more points and 10 or more assists.