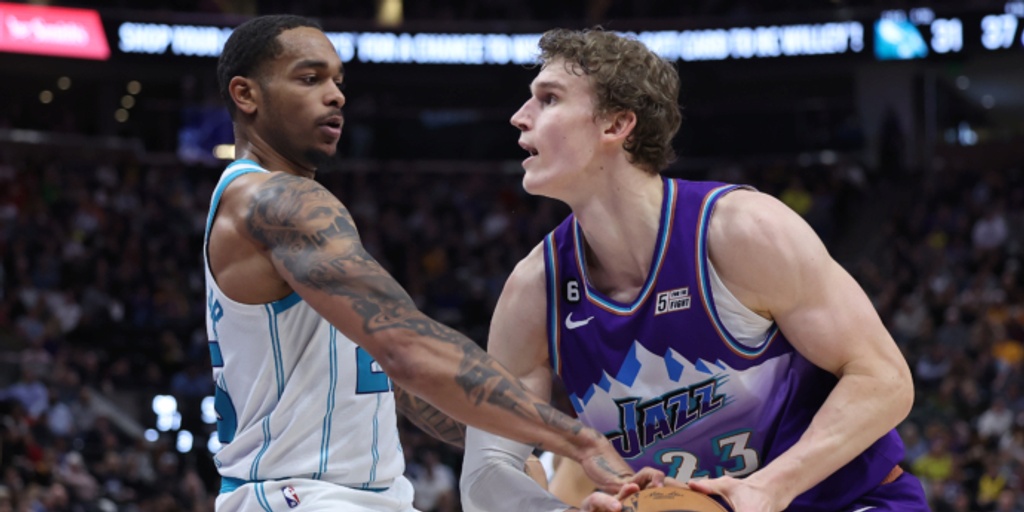 Markkanen scores 25 as Jazz beat Hornets, who make only 2 3s

The Hornets made only two 3-pointers, both by Terry Rozier, the fewest by an NBA team this season. Charlotte had 16 attempts beyond the arc, shooting 12.5%, while the Jazz made 16 of 40. The previous low for Charlotte this season was five 3s, most recently on Dec. 3 at Milwaukee.

“We saw at halftime they weren’t making their 3s, so our focus was just to protect the paint and take away what they wanted to do,” Markkanen said.

Jordan Clarkson scored 18 points and Mike Conley added 14 for the Jazz, who have won three of four.

Rozier scored 23 points and Mason Plumlee had 18 for the Hornets, who were trying to win three straight games for the first time this season.

“We’ve been inside-out all year. I believe we’re like fourth or fifth in drives into the paint per game. We haven’t shot the ball well from 3. Tonight we didn’t get many 3s,” Charlotte coach Steve Clifford said of his team, which ranks at the bottom of the league in 3-point shooting.

“We let them dictate too much on the defensive end. I feel like we didn’t get enough good shots and kind of let the game get away from us there,” Charlotte’s Gordon Hayward said.

The Jazz ran the Hornets off the 3-point line and conceded long 2-point jumpers and wild drives to the basket.

“Our team really executed on the defensive end. Our guys did a great job of switching and disrupting their offense,” Utah coach Will Hardy said.

Meanwhile, the Jazz used crisp passing to find open 3-point shooters and drives through the lane.

Eleven of Utah’s first 15 field goals were 3s, while the Hornets missed their first seven tries from long range. The Jazz led 58-45 at halftime despite having made three fewer field goals.

“My stuff comes off running into screens or off ball screens. Our team does a great job finding mismatches we like,” said Markkanen, who also grabbed 11 rebounds. “I don’t need to shoot it each time because if they double, I can find shooters for 3s.”

The Jazz extended their home winning streak over the Hornets to 16.

The game was played without a lot of emotion and the Jazz led by double-digits most of the way.

“Fatigue starts to set in around the 50-game mark and guys legs are getting heavy. The mental and the emotional fatigue is real. ... At this time of year, everything about the NBA is telling your brain to relax,” Hardy said.

Players start making plans for the All-Star break and injuries start to add up, making for some unenthusiastic midseason games.

“It’s the weirdest part of the season right now. The trade deadline is coming and you’ve played a lot of games ... so you your mind can get a little bit jumbled, when your body’s already worn down a little bit,” Conley said.

Hornets: Because of injuries, Hayward played just his fourth game at Utah since spending his first seven seasons with the Jazz. He finished with 11 points. ... Rozier made Charlotte’s first 3-pointer of the game with 10:51 left in the third quarter. ... The Hornets outscored the Jazz 22-15 on the fast break.

Jazz: The 40-foot big screens above the court facing each sideline were inoperable. ... After the game, Clarkson gave his jersey to rapper YG, who sat courtside. ... Ochai Agbaji flipped in the air on an acrobatic dunk attempt in the third quarter and landed awkwardly. He returned with in the fourth with tape on his left wrist.