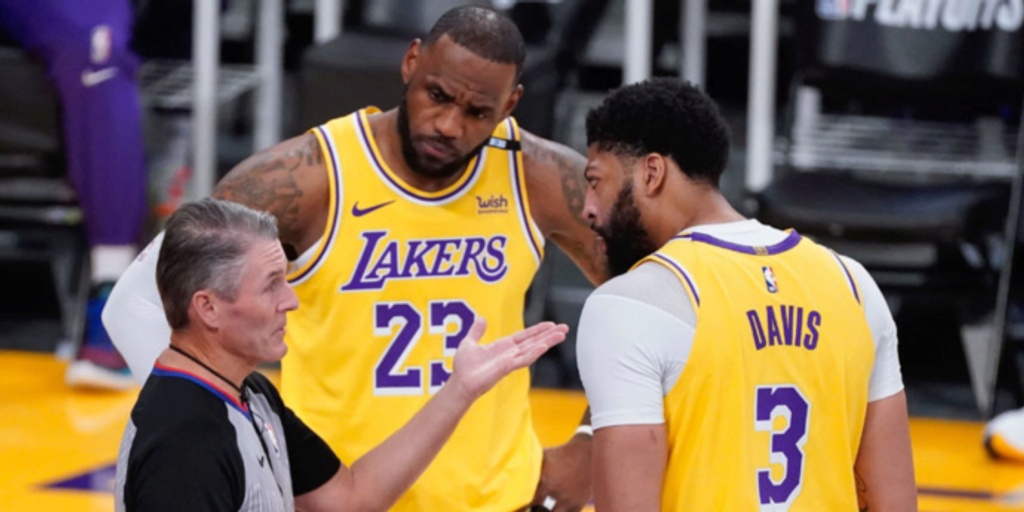 The Los Angeles Lakers are poised to become a top-notch squad in 2021-22 behind their star trio of LeBron James, Anthony Davis and Russell Westbrook. Hollywood’s Big Three is going to make some massive waves, and their on-court chemistry will be the main storyline to follow with the Lakers.

Although LeBron is entering his age-37 season, he’s showing no signs of slowing down. Averaging 25.0 points, 7.8 assists and 7.7 rebounds last season, James should have an even more efficient campaign with Westbrook taking some of the creation burden off his shoulders. If everything clicks into place, with Westbrook and James completely buying in as running mates, there’s real sleeper upside for The King to be in the MVP discussion. The Lakers are prime candidates for a massive bounce back to the top of the Western Conference standings, and James will be a key figure in that equation.

Basketball News’ own Nekias Duncan dissected Westbrook’s looming fit in the purple and gold earlier this offseason, and he showcases exactly why the potential is so high for Brodie to thrive. Playing alongside James and Davis, Westbrook will slide into a role where he doesn’t have to do everything on the court to make winning happen. The triple-doubles will still fly in at warp speed, but he doesn’t need to do so at an inefficient clip.

Westbrook will be able to slide on and off-ball, where he should produce as a cutter and one-on-one scorer near the basket. Westbrook’s bounce is nowhere close to dropping off, so he’s positioned to really up his own value with complete buy-in to the fit alongside James and Davis.

Imagine the possibilities for the Lakers with Westbrook bringing the ball up the court while LeBron and AD are running at full speed in transition. It’s an unstoppable proposition, one that will surely vault the Lakers’ overall tempo. Last season with the Washington Wizards, Westbrook helped boost them to No. 2 in transition frequency at 18.2%. Meanwhile, the Lakers checked in right in the middle of the pack at No. 14 overall with 15.4% of their possessions involving transition opportunities.

Although the frequency difference was notable, Washington and Los Angeles both scored 1.14 points per transition possession. Westbrook loves to put his foot on the gas pedal, and it should lead to the Lakers utilizing this weapon more than ever before.

Davis is still the 1B to LeBron’s 1A, but he’s the fulcrum to the whole operation. As the Lakers’ anchor on defense, plus an ever-improving scorer, Davis’ equity is immense. If Los Angeles deploys more lineups where Davis is at the five-spot, where he’s been reluctant to play throughout his career, it opens Pandora’s box for their two-way dominance.

It remains to be seen if that happens after bringing aboard Dwight Howard and DeAndre Jordan, but it’s a thought that needs to become reality soon enough for the Lakers. Davis reportedly told James and Westbrook he would embrace playing center more often, and it’s a real asset to allow more spacing around the trio’s lack of perimeter shooting. Davis’ speed for a big coupled with his athleticism makes him a modern-day force at the five.

For the Lakers to really take the necessary steps forward and become one of the NBA’s elite teams in 2021-22, the Big Three needed to be surrounded by above-average-to-elite three-point shooters. Well, Lakers GM Rob Pelinka certainly made that his top priority following the Westbrook blockbuster move on draft night.

All of the following players shot above 40% from downtown last season, and will now play integral roles in Los Angeles’ rotation: Wayne Ellington (42.2%), Carmelo Anthony (40.9%), Kent Bazemore (40.8%), Malik Monk (40.1%). All four of these players will see minutes alongside James, Davis and Westbrook to allow them to wreck havoc around the rim.

Los Angeles has the oldest roster in the Association, but one that actually fits very well around one another. Although L.A. appears to be banking on LeBron and AD to be potential Defensive Player of the Year candidates, given the lack of versatility surrounding them on that end of the court, the offense should produce fireworks consistently. Let’s take a look at the Lakers’ 2021-22 roster, one that looks to be well-constructed to make their Big Three  flourish:

Penciling Ellington and Bazemore into the starting lineup is a projection on my end to best help out the floor-spacing potential around LeBron, AD and Brodie. With so much depth at the guard and wing spots, many of these players will see significant run throughout the season next to the stars.

Where exactly does Los Angeles stack up in the West? Honestly, right near the top. They Lakers are in the top tier of a loaded West, alongside the defending conference champion Phoenix Suns and No. 1 seed Utah Jazz.

If everything clicks immediately for Westbrook within the Lakers’ system, there’s a real opportunity for the Lakers to take back the top spot once the playoffs arrive. Maxmizing the window for LeBron in his late 30s is exactly what the Lakers are doing. The addition of Westbrook not only raises their floor, but the ceiling over the next two years is through the roof.

If the best-case scenario happens for Los Angeles, we're potentially talking about back-to-back Finals appearances. That's certainly on the table, especially if Westbrook blossoms in his new role alongside LeBron and AD.

Everything is in place for the Lakers to make another run to a Finals. With LeBron showing no signs of slowing down, Davis still coming into his own entering his true prime years, plus Westbrook hitting the ground running as a complimentary teammate to open up the offense, Los Angeles has all the ingredients in place to have a special 2021-22 campaign. Now, all that needs to be done is to bake it all in the oven for perfect results throughout a rigorous 82-game regular season schedule.