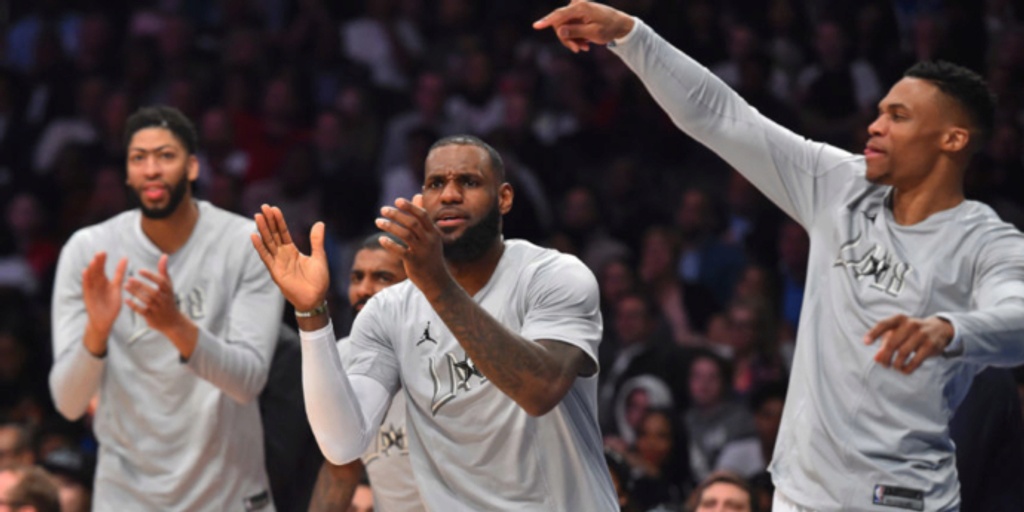 We got draft night magic on Thursday, with the Washington Wizards sending Westbrook and two second-rounders (2024, 2028) to the Lakers for Kentavious Caldwell-Pope, Kyle Kuzma, Montrezl Harrell and the 22nd pick of this year's draft (Isaiah Jackson). Jackson was later traded to the Indiana Pacers for Aaron Holiday and the 31st pick of the draft (Isaiah Todd).

But enough pick minutiae: Westbrook is slated to share the floor with LeBron James and Anthony Davis.

The Lakers entered the offseason looking to revise the roster, and kicked things off with one heck of a splash. Adding that level of star power without giving up a premier asset -- Kuzma is fine, but far from a blue-chipper -- is always a win on the surface.

But basketball teams aren't built on the surface, nor can they really be evaluated on paper.

Westbrook is, and has been for quite a while, a polarizing player in the league. If there's a list of surefire Hall-of-Famers that have been more heavily scrutinized than him -- including by your's truly -- then there's no way it's longer than, like, three people.

The early takes on the Westbrook-to-LA deal have been on opposite ends of the spectrum. It's either #GameOver for the rest of the league, with Westbrook expected to thrash teams as a theoretical third option; or, this is shaping up to be a utter disaster due to spacing and decision-making concerns.

Like most things in life, the truth is somewhere in the middle. There's reason to be excited for Westbrook's addition to this roster; concerns about the fit are also valid. Let's take a look at the specifics of what he brings to -- and takes off -- the table for the Lakers.

The Lakers' formula in the LeBron-Brow era has been simple: we will outsize you, rebound every miss, bludgeon you at the rim, and crowd the paint on the other end. On the surface, Westbrook fits the mantra.

He's a powerful (and explosive) 6-foot-3 at the 1, allowing him to generate advantages practically on a whim. The rim prowess remains, even at this stage of his career. He's averaged north of seven rim attempts per game in six-of-the-past-seven seasons; that number dropped to 5.0 last season, though that comes with the context of him working through a quad injury for a large chunk of the season.

At his best, Westbrook can still get downhill. He can come off a ball screen and kick things into high gear; he can clear a side after forcing a switch and get to the cup. He adds occasional value as a post-up threat against smaller defenders. In transition, Westbrook can push after outlet passes, or grab-and-go himself.

For a Lakers team that struggled in the half-court last season -- they ranked 23rd in efficiency, per Cleaning The Glass -- one way to mitigate those concerns is to play a little faster. Westbrook's ability to generate early offense by his lonesome could be an asset.

He isn't just a threat to score, either. He's one of the league's most prolific playmakers, a skill accentuated by the attention he draws as a driver. There isn't a pass in the book that Westbrook can't make, though he's much more comfortable as an interior passer than a kickout artist. Get him downhill, and he'll feed bigs with an assortment of lobs, wrap-arounds, and traditional dump-offs.

Westbrook should slot in nicely as an early offense playmaker. Early drag screens with Davis (or LeBron, for that matter) should be fruitful. There are plenty of transition hit-aheads in Westbrook's film, which should vibe with Davis' ability to run after misses and seal his defender early. If Westbrook could get Rui Hachimura and Daniel Gafford early buckets, LeBron and Davis will absolutely get some freebies.

Westbrook also adds juice as a live-dribble passer. The amount of velocity he places on his dimes unlock windows that aren't available to everyone. Placement can be an issue at times -- he'll go high when he isn't completely under control -- but he should help the Lakers generate more corner threes than they did last season (8.1, 17th). In fact, Westbrook ranked fourth in corner-three assists (77) this season despite the injury woes and missed games.

But everything starts with the rim pressure with Westbrook. That's the primary appeal, and where the fit alongside LeBron makes sense. While LeBron is a top-three player in the league at worst, we've approached the point where he isn't a blow-by-literally-anyone guy anymore. At the very least, it's not fair to expect that from him on a game-by-game, possession-by-possession basis.

It's why the initial addition of Dennis Schroder was key for the Lakers; he was a guy who could get to the rack and take some of the on-ball burden off of LeBron. Replacing Schroder with Westbrook is a sizeable upgrade, even if there are shooting concerns present (more on that later).

Beyond that, the non-LeBron minutes were a bit of a mess last season. Injuries played a part in that, but even the good-and-healthy version of Schroder isn't quite offense-onto-his-own good. Westbrook is a lot closer to that status. Combine his singular talent with the shooters the Lakers have added thus far in free agency, and it's easy to see a pathway to Westbrook-led second units having success.

Even with some workarounds, it's still hard to look past the shooting.

When factoring in volume, Westbrook is one of the worst three-point shooters the NBA has seen at the guard position. In a league that has become so dependent on shot creation -- and specifically, pull-up shooting -- it's fair to question what may happen to Westbrook's effectiveness once playoff time comes around.

It's one thing to be a poor shooter, with teams ducking under picks and hitting you with soft closeouts on the perimeter. It's another thing entirely for teams to practically ignore you from outside the arc. There are only so many empty-corner looks, dunker-spot relocations, and slot cuts you can muster to make that work.

The Lakers have done their part to add shooting -- Wayne Ellington, Malik Monk, Carmelo Anthony just to name a few -- but none of those guys should be considered good defenders. Striking the shooting/defense balance around Westbrook will be key to the Lakers' postseason success.

(I should add: Monk quietly made strides defensively last season in Charlotte, but you get my overall point.)

Speaking of defense, Westbrook is a mixed bag -- and has been for quite some time. When locked in, he can be a legitimate positive. He possesses the lateral quickness to mirror guards, and the strength to absorb blows from all but the elite power wings in the sport. He can get in a stance, cut off drives, then finish possessions strong with a healthy contest.

He just hasn't been able to consistently put those possessions together. Some of it is injury. Some of it is role -- it's hard to be a lockdown guy with a ton of offensive responsibility. But a lot of it is Westbrook.

Screen navigation is a problem for him. The angles he takes when defending ball screens can be described as adventurous; even when taking solid angles, he often fails to stay connected to the ball-handler.

Off the ball, Westbrook can be a demon in the passing lanes. He attacks the ball with the same fervor that he attacks the rim. Errant passes can and will be picked off. And when engaged, he can occasionally provide value as a dig-and-recover guy (his hands are quick and strong, leading to strips) or a rim protector.

But Westbrook often gets caught ball-watching. Being an event creator on defense is nice, but not if it's offset by losing cutters and relocating shooters.

The Lakers are making a couple of bets with Westbrook here. They're hoping that with less of an offensive burden, Westbrook will be able to put more positive plays together at the point of attack. With Schroder and Alex Caruso gone, he will have to fill that void.

On the flip side, the Lakers are trusting their backline. In the event that Westbrook proves not to be up to task, having LeBron and Davis -- two of the best off-ball defenders in the sport -- should be quite the insurance policy.