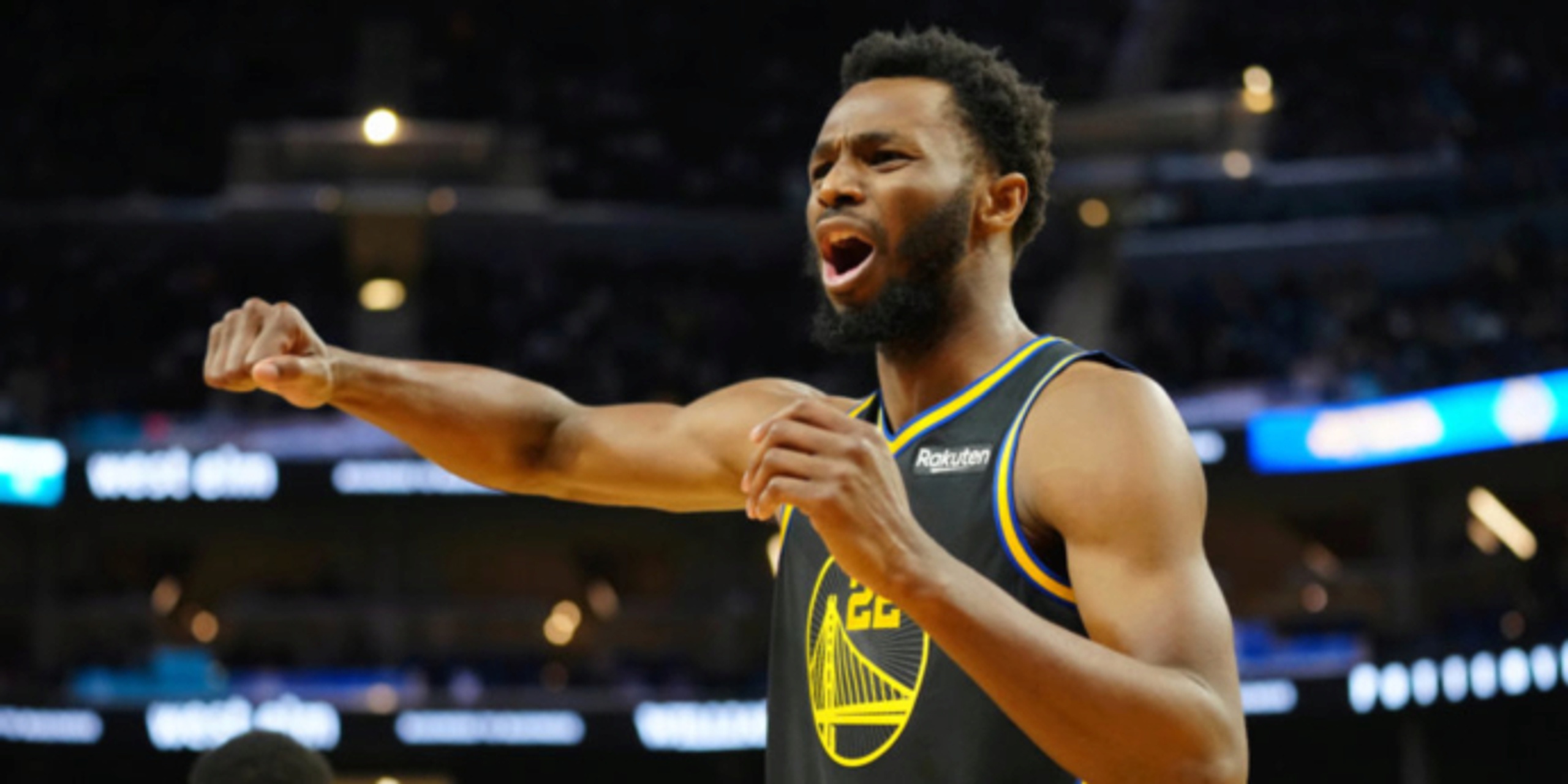 The Golden State Warriors are 12-2 and on top of the basketball world. They're led by Stephen Curry, Draymond Green and, you better believe it, Andrew Wiggins.

Wait — that Andrew Wiggins? The guy consistently pegged as one of the most inefficient volume scorers of his time? The guy earning $31.6 million while being a trade-machine staple?

Nope. This is a different Andrew Wiggins — a cutting, slashing, precise scorer who is finally clicking into place in the high-octane Golden State offense. The Warriors have used the power of their two healthy stars to make Wiggins' life easier, and the former No. 1 pick has responded by maximizing his new role.

Wiggins' usage rate, according to Cleaning the Glass, is down to just 22.1%, which is the lowest since his rookie year. Meanwhile, he's averaging a career-high 116.2 points per 100 shot attempts, which also ranks in the 76th percentile among all wings. Before this season, Wiggins had never been above the 54th percentile (2015-16).

Per NBA Stats, 70.5% of Wiggins' made field goals are coming off of assists this season. That is an unreal jump for him and by far a career-high. A whopping 96% of his made threes come via an assist. Over half of his field-goal attempts and over 30% of his three-point attempts have required zero dribbles — both massive career-highs. Wiggins is holding the ball for less than two seconds on 57.8% of his shot attempts, and wouldn't you know, that's another earth-shattering career-high.

Ethan has always maintained that Wiggins is an incredibly underrated passer. But these numbers are objectively positive, even if it means he's being used more as a scoring complement and less as a playmaker. The shot selection reflects that Andrew Wiggins, The Finisher is a step in the right direction.

The 6-foot-8 wing is taking a career-low 29% of his shots from the mid-range area, per Cleaning the Glass. He's also up to a career-high three-point rate (33%) and at-rim frequency (38%, in the 82nd percentile among wings). Wiggins has feasted when attacking the basket this season. He's making 73% of his shots within four feet of the hoop (you bet that's a career-high!). Wiggins is also drawing fouls on 10.6% of his shot attempts; that's actually low compared to past seasons, but this year, it puts him in the 86th percentile among wings.

I like this play the Warriors are setting up with smaller lineups. Pull the opposing big out, fake the pindown, and Wiggins can beat most guys as a cutter. Draymond Green times this up well pic.twitter.com/t2qausVqec

Zooming in a bit more: Maple Jordan might be one of the better cutters in the league this season? It's a tough claim to make because play-type data is notoriously finnicky. But this is worth noting: per Synergy/NBA Stats, Wiggins is averaging 1.59 points per possessions when he gets the ball off of a cut. That's the best among any wing in the entire NBA with at least 20 such possessions this season, and fifth-best among all players!

This all gets Wiggins to a career-high 58.5% True Shooting percentage. And that's despite him only being around league average (35.2%) from long range. The 26-year-old is playing the fewest minutes per game of his career (29.1) and still contributing heavily as a scorer while improving as a rebounder. He's getting downhill by himself and with help from teammates, and finishing at the rim with stellar efficiency.

"Man, I've just been taking what the defense gives me," Wiggins told BasketballNews.com in Cleveland. "Take the first shot that's there as the easy shot, and at the same time, trying to stay aggressive and keep getting to the rim."

Being teammates with an otherwordly scorer, shooter and all-around player like Curry *kinda* helps too. Golden State's superstar draws two, three or sometimes four defenders out to the perimeter as he slithers around the half-court, and in turn, it opens things up for the Warriors' offense. Admittedly for Wiggins, though, he catches himself gazing at the show.

"You just watch greatness. That's all it is. You're still staying alert, you're still assertive and everything — it's just some part of you that's watching because all you can do is watch," Wiggins said. "It's entertaining. It's not entertaining for just the fans, it's entertaining for the team too. When we're on the court, we just find ourself watching and just shaking our head 'cause it's like... 'Is that believable?' But he's playing at a different level right now.

"You can just tell on [opposing teams'] faces sometimes with the shots he makes and stuff he does... They just go back [on the other end], and they're just like... 'What can you do?' And it's true — what can you do when he's making those shots?"

On the opposite end, Wiggins is all the while quietly playing an impact role on defense. The BBall Index has created metrics that track Matchup Difficulty (usage rates and offensive impact of players guarded) and positional versatility (how often a player is guarding different positions). Wiggins is in the 98th percentile for Matchup Difficulty and the 94th percentile for Positional Versatility.

This isn't to say he's an elite defender, but Wiggins is taking on some of the toughest defensive work for the league's best defense. That's meaningful.

"Guarding one of the other team's best players, you gotta be [in a zone], because they're gonna be in attack mode, they're gonna be aggressive the whole night," Wiggins said. "And if you don't [bring that focus], then they're gonna get off. So you've just got to stay on it."

In summation: Wiggins has found his niche with the Warriors by not doing too much on offense and staying aggressive when his teammates find him. He's an asset on both ends of the floor for the best squad in the NBA.

"It's a different job being the No. 1 option to being in support of the No. 1 option, and I think that's the main thing," Warriors head coach Steve Kerr said of Wiggins' play. "On our team, he can focus on being a great defender, guarding the opponent's best offensive player night-in and night-out, and then just keep things simple offensively — attack the rim, get out in transition and run, shoot when he's open.

"Our team was built for Andrew to play this role. We felt that way when we made the trade, that he would be a perfect fit next to Steph and Klay [Thompson] and Draymond [Green]. Obviously he hasn't played with Klay yet, but we're looking forward to getting Klay back. Klay will add to the defensive versatility and length that we have. But Wiggs is right in the middle of all that, and this league is all about defensive versatility and length, so Wiggs has played that role beautifully for us."

Warriors HC Steve Kerr: "Our team was built for Andrew [Wiggins] to play this role."

Teamed up with @ethman43 for his latest Stats Notebook to detail how Wiggins has found a niche as a cutter, as well as an individual defender, with Golden State. STORY: https://t.co/f9O5ODyexv pic.twitter.com/N4sUqQOMvT

For the first time since the 2018-19 campaign, the Warriors have that championship-contender feel again, and it's the first time Wiggins has been a part of that kind of team. This version of the franchise seems to have the vibes that Golden State's original title-winning group had in 2014-15.

"It's good; we're playing for something," Wiggins said. "We've got a good squad, and a good chance to do something special here, which I'm excited to be a part of it."

THE OUTLIERS (AKA other random interesting numbers I find in the void):