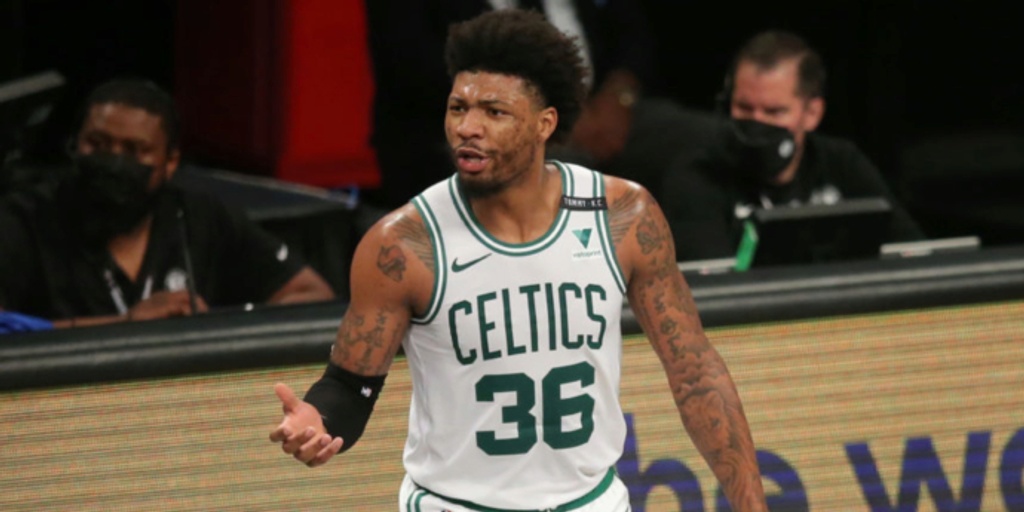 How can the Celtics build out their 2021-22 point-guard rotation?

For the first time in over a decade, the Boston Celtics enter an offseason without a clear point guard hierarchy.

Dating back to 2007-08, when Rajon Rondo broke out and helped the franchise earn an NBA title, Boston had an established line of clear-cut floor generals. Rondo carried the torch (albeit through some injury-shortened seasons) before Isaiah Thomas came along, and then Kyrie Irving, and then Kemba Walker.

All four were established starters and played signficant roles in the team's offense. But when newly promoted team president Brad Stevens sent Walker to Oklahoma City in the first major trade of the summer, the chain broke. Boston is in layers of unfamiliar territory this offseason -- new head coach, new general manager, new starting point guard -- and that's what makes this one of the more interesting offseasons in recent team history.

The point guard question isn't just about what name will appear on the jumbotron. It could challenge that bloodline of Celtics scoring guards and signal a shift to a different style of offense.

Does Boston's lead ball-handler need to be the point guard? Do Jayson Tatum and Jaylen Brown need a third self-creator? What about the bench -- how do the Celtics resolve the revolving door at backup point guard and stabilize an inconsistent second unit? How many chips do the Celtics push in this summer with a potential spending spree looming in 2022?

Each answer changes depending on what avenue Stevens and head coach Ime Udoka choose. I'm just here to lay out the plausible options. Let's get started.

The Celtics have five incumbent options to fill out the rotation. But according to Jared Weiss of The Athletic, two-way player Tremont Waters appears to be on his way out. So that leaves four choices, with the most unproven player also being the only traditional point guard.

Marcus Smart is the longest-tenured Celtic. He's played seven seasons as a complement off the ball alongside all four of Rondo, Thomas, Irving and Walker. But Smart is different. Unlike the latter three in particular, he doesn't command touches or consistently make shots, but instead plays All-NBA-caliber defense and play-makes at an underrated level.

Despite what disgruntled Celtics fans might say about him hijacking possessions, Smart's usage rate has never exceeded 20%. He's a familiar fit next to Tatum and Brown, and could be the fuel that can jump start last year's disappointing defense.

Udoka sees it, too. He called Smart a 'foundational piece' back in June. If the Celtics re-sign Evan Fournier, Smart can focus on distributing to three solid scorers while setting the defensive tone. He's a capable starter -- even if his role looks different from Celtic point guards' past.

The experience level plummets after Smart. Payton Pritchard carved out a spot in the rotation as the 26th overall pick last season. The 23-year-old rookie made 41.1% of his threes and generally looked composed with the ball, but Pritchard has a ways to go as a defender and overall decision-maker.

Then, there's 2019 lottery pick Romeo Langford. The oft-injured guard may get some burn at point guard in Summer League, and has shown glimpses of a versatile defender and attacker off the dribble. At this stage, though, Langford would be unprepared for a role he hasn't taken on since high school.

Carsen Edwards has yet to find consistency in his pro game and in the lineup. That leaves 21-year-old Israeli prospect Yam Madar -- the only player with a season of professional experience as a true point guard -- as a longshot option.

I'm as bullish on Madar's NBA future as anyone. At 6-foot-3, Madar's on-ball tenacity, athleticism and 40% three-point clip could shape up as a lethal combination. But it would be risky to even slot Madar in as a backup from the jump, much less put him in the starting lineup.

If the Celtics made no offseason addition, I'd expect Smart to roll as the starting "point guard." The position is in quotes because his role, and the position in general, lines up less and less with traditional responsibilities. Smart could be the "point guard," while Pritchard and Langford operate as backup "point guards," but Tatum and Brown will be just as important in setting the offensive table.

The Draft and Free Agency

Boston traded its No. 16 overall selection to OKC in the Kemba Walker deal. As things stand, Stevens only has the 45th pick to work with. If the choice is a point guard, that rookie is unlikely to be a Year 1 contributor. So we'll move on to free agent options.

The Celtics do not have cap space. They're actually $16.3 million over the salary cap, per Spotrac, and that's before potentially bringing back Fournier, who they can go over the cap to re-sign. Free agent signings will have to come via the Non-Taxpayer Mid-Level Exception (worth about $9.5 million), the Bi-Annual Exception ($3.7 million) or veteran minimum contracts.

The pickings slim right down. I won't speculate on projected contracts, but consider that the Celtics signed Tristan Thompson to a similar deal (two years, $19 million) last offseason. Thompson was expected to be a borderline-starting player, and he more-or-less met that projection. Guards who could fit a similar tier include: Derrick Rose, T.J. McConnell, Reggie Jackson and Alex Caruso.

Boston signed Jeff Teague to a vet minimum deal last season. The move didn't pan out -- Teague was dealt at the trade deadline -- but he was brought in to be a steady, seasoned backup. Some names matching that description could be Patty Mills, Ish Smith or Langston Galloway.

Both pathways can infuse the rotation with quality players, but they likely won't be a long-term answer at the position. Plus, point guard isn't the only need on the roster, and the Celtics may find better value at another position. They shouldn't feel boxed in with these two avenues.

Do not expect Boston to swing another layered blockbuster this summer. If the salary cap sheets tell you anything, it's that Stevens is loading up to make a splash in 2022, when they have just three players locked down. The front office will bide its time until then.

The Celtics do have a whopping six trade exceptions at their disposal. Four of them are significant, worth approximately $11 million, $6.7 million, $5 million and $4.7 million. Teams cannot combine exceptions, so these would have to be used separately. But the $11 million TPE in particular must be used soon, or else it will expire on August 16.

What could the Celtics do with it? Potentially absorb a starting-caliber point guard, or package it with other players to make a more sizeable splash. For example, according to The Athletic's Zach Harper, both Dejounte Murray and Derrick White are "gettable" in trade talks. They haven't been linked to Boston, but Murray and White are two examples of players who could fit the rotation while being financially attainable in a trade.

Ultimately, I think there are three standout routes the Celtics can take without upending the roster.

Smart is going to be on this team barring an utter shock, and he should start -- but at point guard? I believe so... unless, in the interest of preserving the all-powerful 2022 cap space, the Celtics let Fournier walk. Then Smart could return to his usual role off-ball, and the starting point guard could be acquired via trade or the $9.5 million free agency slot.

At backup, I would predict a platoon of Pritchard, Langford and a veteran acquired with that $3.7 million Bi-Annnual Exception. Perhaps Madar breaks through, as well.

But the key takeaway should be that the point guard situation will differ from the past decade. Let's look back at the pipeline. Rondo's four highest seasonal usage rates of his career came in Boston. Thomas, Irving and Walker all logged usage rates of at least 26% in every season wearing green, per Basketball Reference.

Gone could be the days of the ball-dominant point guard in Boston. Whoever plays point has to facilitate, defend and find rhythm without extended touches. Jayson Tatum and Jaylen Brown are the franchise's two faces, and every other player should be working off of the young stars.