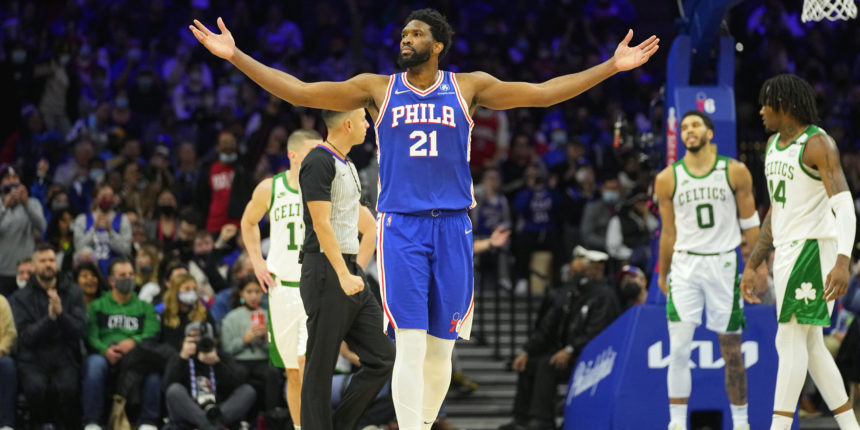 Someone should tell Joel Embiid that it’s not fair to kick someone when they’re already down — because after he led a blowout win over the bumbling Boston Celtics, Embiid dropped a truth bomb on the very team that sent him home in two playoff series.

Embiid is not impressed by the Celtics

Joel Embiid, on their improved defensive execution tonight: "Charlotte, they move the ball extremely well and they have shooters all over the place, and they made a bunch of jump shots. Boston is more of an iso heavy team, so it becomes easier to load up and try to stop them."

Does it hurt more for the fans of Boston that he was being brutally honest? If he was just trolling for a funny reaction, at least then you know the comment is a little distorted. Hell, you can ever fire a shot back. But in this instance, he’s purely pointing out the harsh reality — leaving Celtics fans tongue-tied without a comeback.

Sitting at 22-22, just outside of participating in the NBA's play-in tournament, the Celtics have been a disaster, with blown leads (most in NBA), weekly vacancies due to health and safety protocols (most in league) and an onslaught of public inter-team callouts (their own coach leads this category).

The worst of these callouts came from their starting point guard, Marcus Smart, who expressed his displeasure about the lack of ball movement and reliance on isolation plays. Shocker, I know.

“Every team knows we’re trying to go to Jayson and Jaylen. Every team is programmed and studied to stop Jayson and Jaylen. I think everybody’s scouting report is to make those guys pass the ball… They don’t want to pass the ball. That’s something that they’re going to learn. They’re still learning,” said Smart after the Celtics became the first team ever to blow a 14-point fourth quarter lead. They would then lose by 14 points against the Bulls in an early November game.”

Good to see they haven’t changed!

No real synergy in the way they play

With the flames getting higher with each passing week, the Boston Celtics have made it clear they have no interest in splitting up the All-Star duo of Jayson Tatum and Jaylen Brown, according to Shams Charania of The Athletic. No one is calling for that drastic move but, clearly, something needs to be done.

According to NBA advanced stats, the Celtics rank third in isolation plays. They are also the only team in the NBA with three players in the top-45 most frequent iso players. Tatum is third. This makes their game not only stagnant and more easily defendable — it's also boring for the players. No one wants to commit to a spiritless system of waiting around for one guy to make his move. The fact that we know that means explosive free agents do, too.

There are a hundred different ways to explain why the Boston team that wiped the floor with Joel Embiid two playoffs ago is now a helpless second-rate team fighting for a play-in tournament chance — but the stylistic dynamic of Brown and Tatum, which is the reason for the predictable iso play, could be the biggest reason.

Their two best guys don’t complement each other, past Tatum sometimes getting doubled and trying to find Brown. They share similar heights, so they don’t benefit from swapping defenders. That’s why they play like they're in a game of 21, because they have an understanding of that avenue as a way to work off each other.

They should start turning a corner a bit, since they now have the seventh easiest schedule according to Tankathon. But their fundamental problem won’t perish without a great point guard to create plays and get others more involved. Until then, this will likely not be the only rib shot the team and its fans must endure.

MORE:
NBA News

Lee Merritt: The NBA could impact public policy and elections
Tim Duncan describes what he doesn’t like about the NBA today
