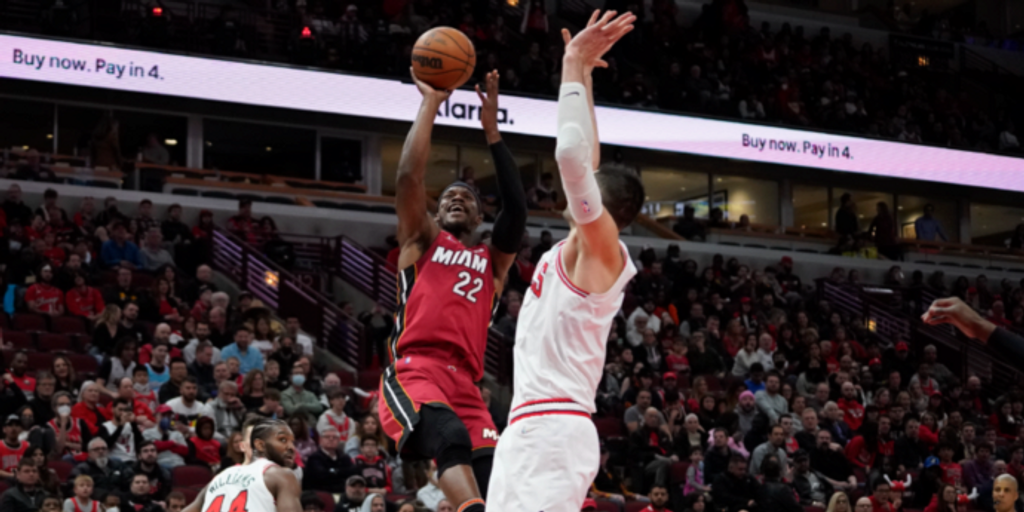 Jimmy Butler’s deep shooting has always been a luxury, not a necessity

Jimmy Butler was never a shooter in the way Hassan Whiteside referred to him when the Miami Heat struck a deal to land the All-Star swingman in a sign-and-trade back in July 2019.

That summer saw Butler touch down in Miami via Philadelphia in a wide-ranging, four-team deal. (Whiteside didn't stick around for the party and was sent away to Portland). Since then, while Butler has risen to elite player consideration, his three-point shot has worsened.

(Some cite it as a knock, but I would say his productivity in Miami in spite of that is a testament to how good he actually is as a two-way player, so let's proceed.)

On exactly 2.0 threes per game, Butler’s shot 24.2% through 166 regular-season games with the Heat since the start of the 2019-20 campaign. With the Philadelphia 76ers, Chicago Bulls and Minnesota Timberwolves, his three-point percentage hovered between 33.7% and 35.5% wth each franchise.

And since becoming an everyday starter in the 2013-14 season — when he first attempted at least 2.0 threes per contest — the only other time he’s shot worse than 31% from deep was that same year, where he hit just 28.3% of his triples. The jump to 37.8% from distance in 2014-15 was a significant reason why he won Most Improved Player thereafter. (We’ll get to the playoffs momentarily.)

This season, Butler had been reaching career-lows until recently. Before his sixth All-Star game appearance, he had been shooting 19.2% from three on 2.0 attempts per game. One especially bad stretch saw Butler go 1-of-17 (5.9%) between Feb. 1 and the All-Star Break.

(It should also be known that the Heat swingman was still putting up 20.6 points, 7.3 rebounds and 5.0 assists per game while hitting 95.1% of his 7.6 free throws per game and playing All-NBA-level defense, as Miami went 6-2 in mostly road games.)

But since the All-Star Break, we’ve seen Butler add a relatively reliable three-pointer, the best we’ve seen from him beyond the arc since the Heat’s run to the 2020 NBA Finals. Since the break, Butler’s hitting 33.3% of his shots from deep. It's slightly below league average and his own career average, but respectable enough given that he’s never needed to be a knockdown shooter to replicate elite two-way production.

Amid all this, Butler has still been hovering around his whole-season averages of 21.4 points, 5.9 rebounds, 5.6 assists and 1.7 steals per game while shooting 48.0% from the field and a career-best 87.1% on 7.9 free throws per contest. You also need to account for his consistent All-Defensive-Team-worthy display on the other end.

He’s even wearing a shooting sleeve!

Power of the shooting sleeve

The last stretch of success like this for Butler came at the Bubble. The entire 2020 playoffs saw Butler hit 34.9% of his threes, nailing 15-of-43 long-range attempts. In Miami's four-game sweep over the Indiana Pacers, a five-game gentleman's sweep over the Milwaukee Bucks and the Eastern Conference opener against the Boston Celtics — a 10-game sample size — Butler enjoyed a 10-of-19 stretch from three (52.4%) before he missed his next nine triples in the series. (By the way, Butler went 4-of-13 in the NBA Finals for a 30.8% clip, in case you’re wondering).

Next, let’s go to the 2018-19 season, the year Butler was famously dealt from Minnesota to Philadelphia. In the 13 games before the trade, Butler hit 37.8% of his threes, including downtown displays of 6-of-7 and 5-of-8 against the Los Angeles Lakers, and 4-of-7 against the Toronto Raptors.

He also had a strong three-point shooting start in Philly; from his Sixers debut on Nov. 14 and Jan. 17 — a 27-game sample size — Butler hit 40.3% of his 2.9 perimeter attempts per contest. He then went 1-of-6 in a game against the Oklahoma City Thunder on Jan. 19, and subsequently missed three games with a sprained wrist. After returning from the wrist injury on Jan. 29, Butler hit only 27.7% of his triple tries on 2.4 attempts per contest. It’s worth noting that in the first three games upon that January return, he went 1-of-2, 0-of-6 and 4-of-8, respectively.

In the 2019 postseason — despite Ben Simmons, Joel Embiid and Tobias Harris all flopping in the famous Raptors series that came down to a bounce — Butler dragged the Sixers to a Game 7 in the East semifinals. In the playoffs, he averaged 19.4 points, 6.1 rebounds and 5.2 assists, and produced a 22.0/7.0/5.6 line against the Raptors in particular; and still, Butler shot just 26.7% from distance across both series — closer to his Miami numbers.

Butler is actually a career 34.6% three-point shooter from deep across 80 playoff games. He was at 37.3% in his first 43 postseason contests, all of which preceded his time with both the Sixers and Heat.

Generally, since becoming an All-Star in 2013-14, he’s been a quality playoff performer outside of a first-round series with the Wolves vs. the Houston Rockets in 2017-18 (though he had just returned from meniscus surgery, and at the time he injured his knee, the Wolves were fourth in the Western Conference).

And then, last season, all final four teams left from the Bubble — the Heat, Lakers, Celtics and Denver Nuggets — all flamed out in the playoffs. (Maybe having only seven weeks between the NBA Finals and training camp, or nine in the case of the Celtics and Nuggets, had something to do with it.)

So should Butler need to be Allan Houston, Jason Kapono, Anthony Morrow or, hell, Duncan Robinson or Tyler Herro from three? Nah. But if he’s making, say, 30-to-33%, it’s a potential game-changer for the Heat amid this championship chase.

Lately, what the Heat have been doing since... that whole thing... is not simply starting Max Strus over Robinson, but subbing off Butler for Herro first, then bringing in Butler for PJ Tucker at the 4 around other shooters in the lineup. Butler will, by default, be given the chance to shoot since he’s sharing court time with guys like Herro, Robinson, Kyle Lowry, Strus or Gabe Vincent in this instance — often three of them at a time.

Teams will live with Butler’s threes, but if he makes them pay enough to where they have to think about guarding him a half-step closer, that slight of a threat will provide lanes to find teammates open for corner threes via drive-and-kicks. It could also open things up for Butler himself as a driver who provides rim pressure, and can do so with more space. In addition, it helps Bam Adebayo, who theoretically would have more room to operate around the rim — as a screen-and-roller, in the mid-range area, as an off-ball screener, or as whatever you want (except a three-point shooter; one day, maybe).

Butler's ability to drill threes is a good tool to have. It's not one you should need to rely on, but a sneaky weapon that could spark other productive offensive actions to defensive reactions as a result, so long as the threat of him actually hitting one or two is legitimately there.

And lately, it has been.