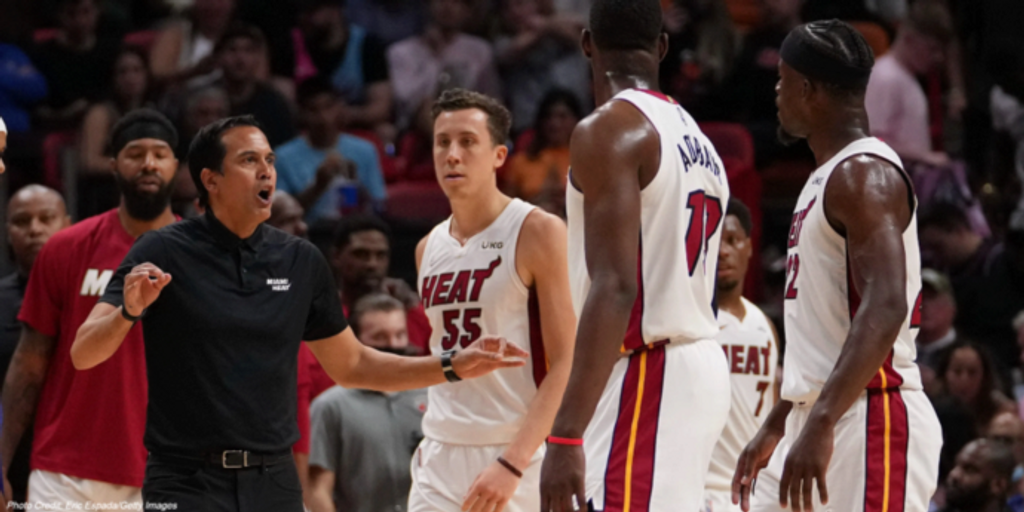 The Heat’s blow-up was necessary, but now the rest is up to them

The Miami Heat were supposed to be peaking now.

After nearly one calendar year, Victor Oladipo returned earlier this month. Shortly thereafter, four months removed from a neck injury via that Nikola Jokić incident, Markieff Morris finally came back. Beginning on March 5, the Heat were engaged in a stretch that included seven-straight home games — of which they won five — before their current back-to-back losing streak, their worst of the season.

Still, despite holding first place in the Eastern Conference, it’s felt like the Heat have needed a jolt — nothing more amplifying of that fact than their last two games. In Philadelphia, against the 76ers without James Harden and Joel Embiid — whose broadcast apparently didn’t want them to win — defeated a mostly healthy Heat team. Miami was missing Oladipo and Gabe Vincent, but still had Jimmy Butler, Bam Adebayo, Tyler Herro and Kyle Lowry, all of whom were nearly 30-balled by Tyrese Maxey.

Look, these are still NBA players, sometimes that happens too.

What typically doesn’t — in public — was the, “kerfuffle, a hurly-burly, tomfoolery, a skirmish, a quarrel, a brouhaha, a dust-up, a hubbub or agree to disagree.”

You’ve probably seen it by now, but here:

Jimmy Butler was HEATED in the Miami huddle after the Warriors went on a big run to start the second half pic.twitter.com/6waBmHlL1r

After the game, and after joking that the team was heated about making dinner plans, Spoelstra offered his thoughts on the tense moment.

“It was pretty clear. We have a very competitive, gnarly group; we were getting our asses kicked, for two straight games, we were not playing to the level that we wanted to play," Spoelstra said. "Every single person in that huddle was pretty animated about our disappointment in how we were playing...

“... Everything has to be better across the board. It starts with our leadership — our veteran players have to lead. And then, we just have to play better. Play better to our identity, play more consistently, and that’s really all the discussions were. I know how it can look to the outside, but as I mentioned before, that is more our language than playing without passion or without toughness or without multiple efforts and lifelessness.”

Tucker, along with Lowry and Adebayo, was one of the three Heat players to address the media after the game. He also downplayed the confrontation.

“Something happened?” Tucker asked with a smirk. “You put cameras on any NBA team, football team, any team, man. (We’re) No. 1 in the East, finally got our whole team back, got our butts handed to us two games in a row by teams who don’t even have their star players... emotions run high ... I laughed, man. I walked off the court laughing... This is part of the game.”

"We’re in a situation where we have a lot of competitive guys. Our biggest competitor is our head coach. Jimmy and UD are tough competitive guys. It’s good sometimes to get some anger and frustration out and just talk about it," Lowry added. "We’re gonna have situations that make people uncomfortable, but at the end of the day, as long as we’re comfortable and we figure it out, it’s all that really matters. And as long as we’re still together, and we are.”

NBA players, veterans, reporters, veteran reporters, coaches, staff, referees, families and secret families would all tell you that this happens, and particularly with contenders. With the Heat specifically, it’s an organization still run by the famously confrontational Pat Riley, who probably looks at this as a regular Wednesday despite the magnitude of social media amplification in 2022. Because this happened publicly, though, chances are this isn’t the first time, just the most public.

Hardened personalities clash every now and then because they want the same goal and might have occasional philosophical differences on how to get there with their teammates. They can argue off of raw emotion because that’s who they are, and the emotion itself mainly expresses that they care — care enough to argue over it, and are prideful enough to defend themselves publicly because of it. That’s probably closer to what this actual is — the Heat, more than most teams and organizations — have probably earned that.

We’ve heard his story, but it bares reiterating: Butler was homeless as a teenager and worked his ass off to become a first-round pick four years after being a JUCO-signee out of high school. Four years after being drafted, he won Most Improved Player, and has been a perennial NBA All-Star and All-Defensive player ever since while earning nine figures.

Just think. No, really, think about the self-belief that dude must have to pull that off? He never would’ve went toe-to-toe with LeBron James in an NBA Finals without it.

Haslem is 41 years old, still in the league and has the respect of damn near everyone you could think of. He’s a been through it all, seen it all and is an old-school dude who really values respect. Haslem went undrafted out of the Florida Gators program in 2002, played in France, came to the Heat in 2003 and has been there ever since.

Spoelstra was initially hired as the Heat’s video coordinator in 1995 — even predating Riley’s tenure in Miami — and worked his way up onto eventually becoming the head coach in 2008.

Remember last season when Haslem went at Dwight Howard? Notably, before even discussing this with teammate Duncan Robinson and podcast co-host David Reid on the Long Shot, Haslem notes how close he’s been with Coach Spoelstra. We don’t know what Butler said, but it might be fair to suggest Haslem felt someone was being disrespectful; sometimes, in the heat of battle, that happens too.

“Me and Spo been through a lot, man,” Haslem said on the Long Shot in August. “We done been through the bottom, we done been mad at each other, we’ve been on the same team, we done evolved to now, we’ve just got a great relationship. It’s symbiotic, we don’t have to say it, we can just feel it. I can look at him, and he can look at me.”

Sometimes, these blowups are necessary — in a team environment, with your siblings, significant other, your bodega guy, your barber and/or your side piece. (Sometimes, you gotta get people to know their role, yanno?) Often, you just can’t let failures fester, and there’s a need to outwardly address them. Miami did that in a very "Heat" way, according to them.

For the Heat, it's very simple from here. This either invigorates you in time for the playoffs, or it derails your season at the worst possible time. It either really works or it really doesn’t.

They did, and now, they’ll also have one of the most essential things an organization could obtain this last in the year — clarity.

If this works, the Heat will be a legit contender, mixing it up in a loaded Eastern Conference dogfight with the Milwaukee Bucks, Boston Celtics, Brooklyn Nets and 76ers.

If it doesn’t, and they flame out of a second-straight post-season, they’ll have clarity on what to do next this summer.